The XKR-S GT has been developed by Jaguar's ETO division to be the ultimate track-focused but road-going iteration of the XK coupe. Extensive aerodynamic and suspension changes, as well as the addition of carbon ceramic brakes, have combined to give the Jaguar XKR-S GT race-car inspired connected feel and braking performance. Initial production will be limited to just 30 cars for the North American market.

A range of bespoke carbon fibre components, including an extended front splitter, dive-planes and elevated rear wing, all work to maximise the XKR-S GT's aerodynamic downforce. Technical learning from the development of the new Jaguar F-TYPE two-seater sports car has also been applied to the XKR-S GT's suspension and steering systems, optimising both immediacy of response to driver input and agility.

Stunning performance is provided by Jaguar's proven 5.0-litre supercharged V8 engine, boasting 550PS and 680Nm, driving through a six-speed transmission and active electronic differential. Combined with the aerodynamic and suspension changes, plus revisions to the traction control system's calibration, the result in straight-line terms is a 0-60mph time of 3.9 seconds. Electronically limited top speed is 186mph (300 km/h). 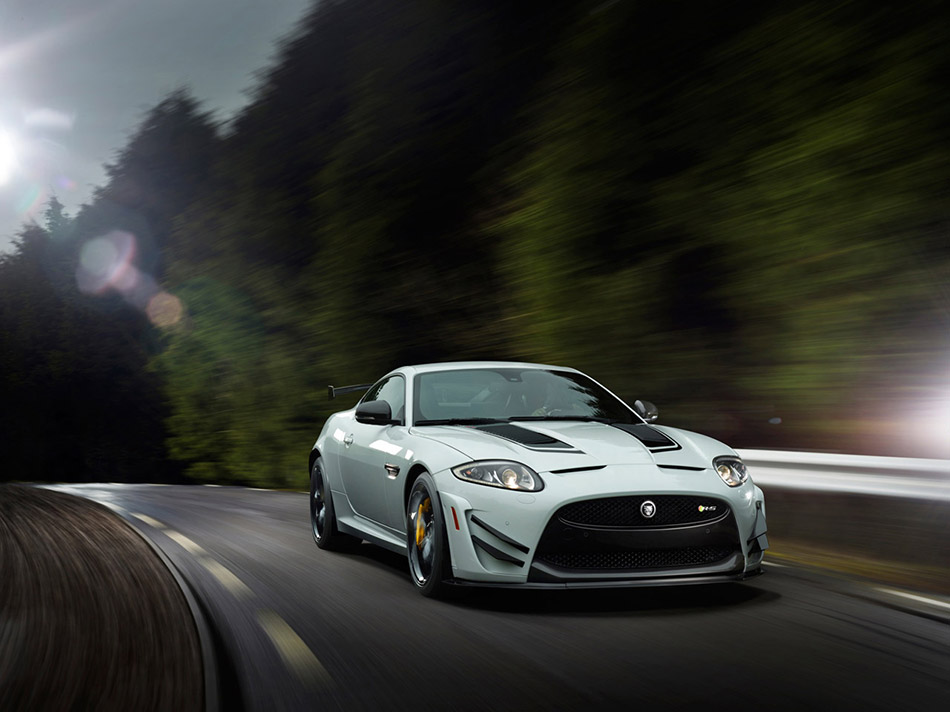 The Jaguar XKR-S GT is available in Polaris White with unique graphics and Jaguar R-S GT script on its louvred bonnet. The Warm Charcoal interior - with red accents - features 16-way electrically adjustable 'Performance' seats finished in soft-grain leather and Suedecloth with the Jaguar and R-S GT scripts integrated into the backrests. Jet Suedecloth headlining and a Jet Suedecloth steering wheel, with aluminium paddle shifters, are fitted as standard. Script to the treadplates and console highlight the exclusiveness of the XKR-S GT.

"The development of the XKR-S GT demanded an uncompromised approach to enhance aerodynamic downforce, with complementary suspension changes to maximise high-speed cornering ability. In combination with the use of a carbon ceramic braking system, the result is the most focused 'R' model Jaguar has ever built which delivers heightened levels of performance and driver reward." Pete Simkin, Director, ETO Specialist Products, Jaguar

"The XKR-S GT has been designed purely by the laws of physics. It has been developed in the wind tunnel and on the racetrack with the sole aim of creating as much high-speed stability and downforce as possible. Nothing has been styled for the sake of it. It's been an exercise in efficiency and the result is a car that's raw, focused and devastatingly quick." Ian Callum, Director of Design, Jaguar

The Jaguar XKR-S GT features a carbon-fibre front splitter of race-car wrap-around type; extending forward by 60mm, it starts the optimisation of airflow around, over and underneath the car. Aggressive carbon-fibre twin dive-planes and wheelarch extensions further the efficiency of airflow around the car, while below the addition of an optimised aluminium front valance serves to smooth airflow under the car as well as enhancing engine and brake cooling performance.

A rear carbon-fibre diffuser ensures the smooth exit of air from underneath the car, while the elevated rear wing - also in carbon-fibre - works in combination with the decklid mounted spoiler to maximise rear downforce. At its electronically limited top speed of 186mph, the XKR-S GT produces 145kg (320lb) of downforce.Bonnet louvres serve as a further engine cooling aid while also helping aerodynamic performance by improving the airflow through the front end of the car.

Allied to the extensive aerodynamic revisions are detailed suspension changes.

The front and rear suspension arms, uprights, wheel bearings, bushings and rear subframe are all new and draw on hardware developed for the F-TYPE. The overall set-up works to increase lateral suspension stiffness for greater precision and responsiveness. 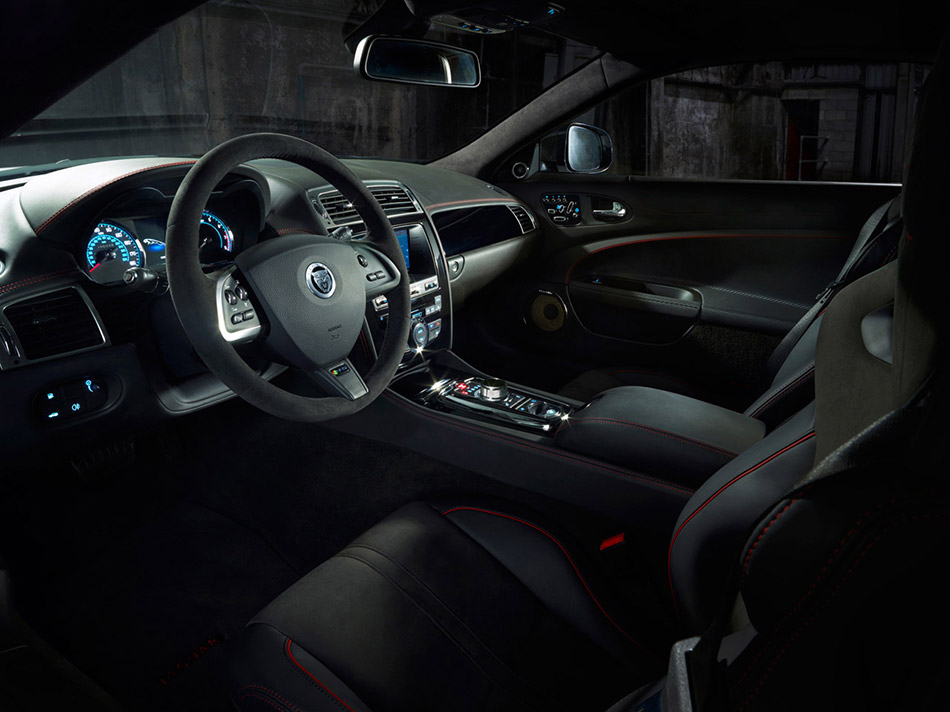 Integral to the revised suspension system is its new spring and damper module design. The Jaguar XKR-S GT has a motorsport-derived twin spring system mated to Jaguar's Adaptive Dynamics damping system - the dampers now being ride-height adjustable. Front and rear spring rates are respectively 68% and 25% stiffer than on the XKR-S, while the damper tune is much more track-focused, providing increased levels of body control and grip.

Jaguar's Adaptive Dynamics have been specifically tuned for the XKR-S GT so that the suspension parameters change to deliver a higher level of body control with maximum traction and grip when the dynamic mode is deployed, offering optimum performance for focused track driving.

The Jaguar XKR-S GT has a front track which is 52mm wider than that of the XKR-S while the rear remains the same. The steering rack is from the F-Type, with a correspondingly faster ratio and retuned steering valve. The result is immediacy of turn-in and response to steering inputs.

"The XKR-S GT is an uncompromised car, but one that inspires confidence and encourages the driver to push it to its limits, fully exploring its handling abilities. It's a car that draws you in and is never intimidating, with performance that is both accessible and rewarding." David Pook, Technical Specialist, Steering and Handling, Jaguar

The Jaguar XKR-S GT is the first production Jaguar to be fitted with a carbon ceramic braking system.

Enhanced braking feel comes courtesy of the electronic Pre-Fill system. Working in conjunction with the car's DSC system, Pre-Fill pressurises the brakes every time the driver comes off the throttle pedal, resulting in a very short and consistent level of travel on the brake pedal. This maximises braking response, reduces the car's stopping distance and delivers increased levels of confidence during high performance driving.

The lightweight nature of the carbon ceramic system means a reduction in unsprung weight of 21kg - so further enhancing the XKR-S GT's handling.

"The brake disc and pad materials are specially tailored for Jaguar characteristics. Because the XKR-S GT is a road car as well as one suitable for customers to take on the track, we engineered it for race-car braking performance but with no compromise to cold or wet weather ability." Edward Nixon, Group Leader, Brakes, Jaguar XKR-S GT

The high-pressure die-cast lightweight aluminium block is stiffened with cast-iron liners and cross-bolted main bearing caps, providing refinement to match its power. The four-valve cylinder heads are constructed from recycled aluminium, between them sitting the Roots-type twin vortex supercharger fed by two intercoolers, which feature their own water-cooling circuit to reduce the temperature of the pressurised air thereby optimising power and efficiency.

The Jaguar XKR-S GT features a fully active performance exhaust system with valves that open under load, both enhancing gas-flow and the car's aural character, while optimising power output.

In straight-line terms, the powertrain's significant output, combined with the aerodynamic, suspension and traction control software revisions, mean the XKR-S GT can sprint from 0 to 60mph in 3.9 seconds and onto an electronically limited top speed of 186mph.