Following its recent restyling, the Mégane range's sportiest version now benefits from a technical upgrade and a bespoke look. Mégane R.S. 275 Trophy is the latest in a long line of limited-editions of the model which began with the Trophy version in 2011 and continued with the Red Bull Racing RB7 (2012) and Red Bull Racing RB8 (2013) versions.

Technical upgrades for an R.S. thoroughbred with even sharper performance

Widely acclaimed both for its on-road performance and when driven round circuits, the Cup chassis with limited slip differential is a standard feature of Mégane R.S. 275 Trophy. 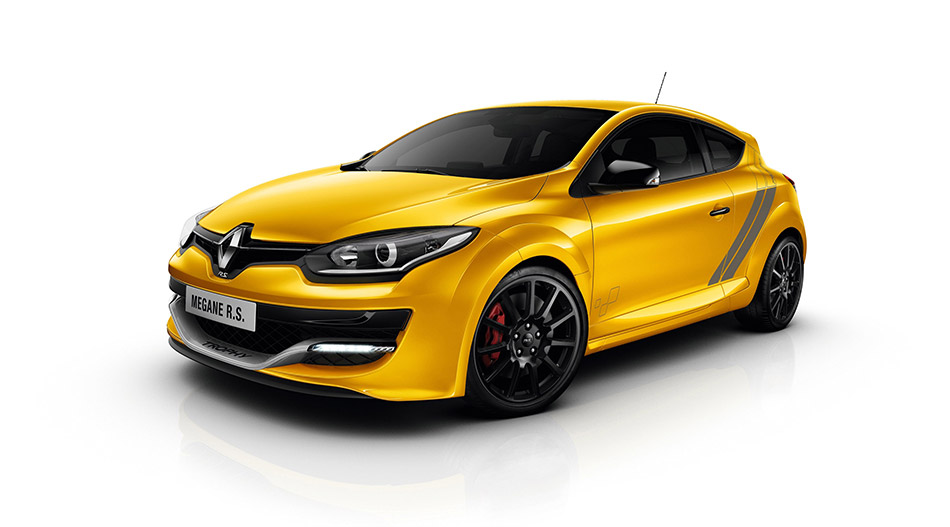 To allow customers to benefit more fully from the car's dynamic qualities, Renault Sport's engineers have worked extensively on Mégane R.S.'s powerplant to extract an extra 10 horsepower. The two-litre petrol engine consequently boasts 275hp, and peak power is reached at 5,500rpm. At the same time, maximum torque (360Nm) is available across a broad rev-band, from 3,000 to 5,000rpm.

Despite this additional power, fuel consumption and emissions have been carefully contained to stand at just 7.5 litres/100km* and 174g of CO2/km respectively.

Renault Sport and Akrapovič, the manufacturer of benchmark exhaust systems for motorcycles and performance cars, have marked their association with the standard fitment of a titanium exhaust system. In addition to benefiting from the lighter weight of titanium, Mégane R.S. 275 Trophy also features a specific, more raucous bark that is sure to appeal to those who appreciate sporty engine notes.

An equipment package with a circuit racing pedigree

Mégane R.S. 275 Trophy kicks off a partnership with the world-renowned damper manufacturer, Öhlins. The limited-edition car can be specified with optional adjustable Öhlins Road & Track dampers with steel springs. This evolution of technology employed in motorsport and on Mégane N4 allows drivers to adjust their damper settings easily and unaided.

Also available as an option for Mégane R.S. 275 Trophy for those who enjoy circuit days are MICHELIN Pilot Sport Cup 2 tyres. This ultra-high performance solution was developed jointly by Michelin and Renault Sport specifically for this new limited-edition front-wheel drive car.

A limited-edition version that packs exclusive styling, inside and out

The new livery includes Trophy branding on the Platine Grey F1-type front blade, while the personalised body sides feature Trophy decals. Platine Grey has also been selected for the chequered flag graphic at the bottom of the doors.

Like the new signature engine note, the carbon exhaust tail pipe, too, is the work of Akrapovič.

Optional 19-inch black Speedline Turini wheels derived from those used by competition versions of Mégane can also be ordered.

Inside, Mégane R.S. 275 Trophy comes with leather and Alcantara Recaro bucket seats with visible red stitching. Red stitching has been carried over to the rear bench seat, while the head rests feature Renault Sport badging.

Other interior highlights include visible red stitching for the Alcantara steering wheel trim and hand brake bellow, as well as a Zamac gear lever knob.