The direct injection TFSI engine, which VW has recently started to fit, promises a great deal of tuning potential. By means of modification to the engine management system, JE DESIGN squeezes 180/(244) kW/(bhp) and 355 Nm from this 2 litre turbo-charged four-cylinder engine, which otherwise generates 147/(200) kW/(bhp) and 280 Nm in the Seat Leon. This power boost enables this handsome Spaniard to race along 13 km/h faster than the standard version. Even more impressive than the top speed of 242 km/h is the awesome acceleration. The 6.4 seconds it takes to sprint from 0 to 100 instead of the standard 7.3 speak for themselves! The acceleration boost comes complete with a TV parts certificate. Needless to say, after this power enhancement, the engine still complies with the EI regulations. 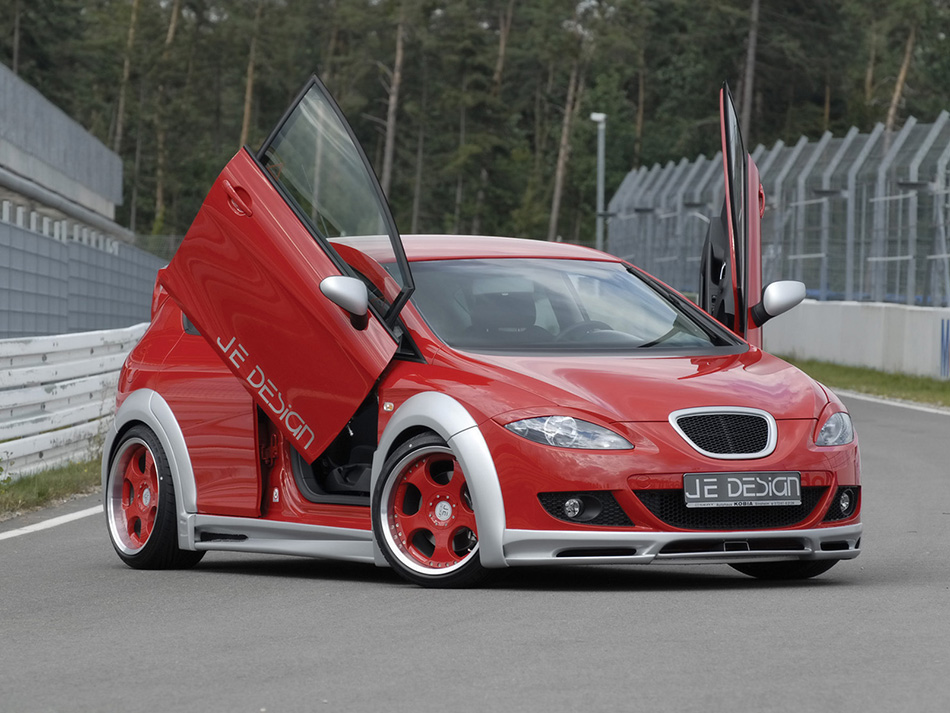 The Seat Leon makes a mighty impression after JE DESIGN has fitted it out with its wide body conversion kit. JE DESIGN starts off comparatively tamely at the front with a new front grille without a badge including a grille insert. Headlight lens covers lend this Spaniard a more serious "look". However, on reaching the side-mounted body styling elements, it becomes clear that we are not dealing with just an ordinary tuning job here. This is because JE DESIGN fits the Leon with a 10-piece wheel arch extension kit, which enables the Leon to fill out any rear-view mirror that little bit more than usual. The knowledge of this effect magically compels the driver to sport a broad grin across his face when overtaking. A set of side sills go to complete the tuning on the sides.

JE DESIGN's front spoiler and the boot-lid rear spoiler produce a lift-reducing effect. The rear view is rounded off by the JE-DESIGN rear apron attachment, which can be used both with the standard-fitted rear silencer as well as the awesome-sounding 4-pipe rear silencer specially produced in stainless steel by JE DESIGN. The latter features two dual tailpipes (diameter 90 mm).

So that the broader Seat Leon can run rings around the competition, JE DESIGN equips it with a coil-over suspension, which allows the suspension to be lowered between 35 and 65 mm to suit the driver's individual taste. Without doubt a sound investment. Drivers who now order the LSD doors can boast having one of today's hottest rides.

Standard wheel rims? Absolute "No go!" for JE DESIGN! But rather its proprietary set of wheels VISAGE (2-piece rim design with titanium bolts) in the dimension 10 x 18 ET 31 with size 255/35 ZR 18 tyres. Certainly worth showing off!