At the 2008 Geneva Motor Show, SEAT will unveil the prototype SportCoupe "Bocanegra", a model which brims with character and sporting style from nose to tail. For the Spanish brand it marks the start of a product initiative extending over the next few years, which will include the important launch of the new-generation Ibiza as well as a new ‘B-segment' saloon car, due to make its public debut in 2009.

Capable of conveying intense emotions at first glance, the ‘Bocanegra' follows the aesthetic and practical vision of car design as practised by Luc Donckerwolke, Chief Designer at SEAT.

Using the very latest technology at the recently inaugurated SEAT Design Centre in Martorell, SEAT's designers and engineers have produced a vehicle that is a perfect blend of sportiness, emotion and efficiency. The SportCoupe, with its ultra-modern, striking styling, showcases a host of intriguing features both inside and outside. 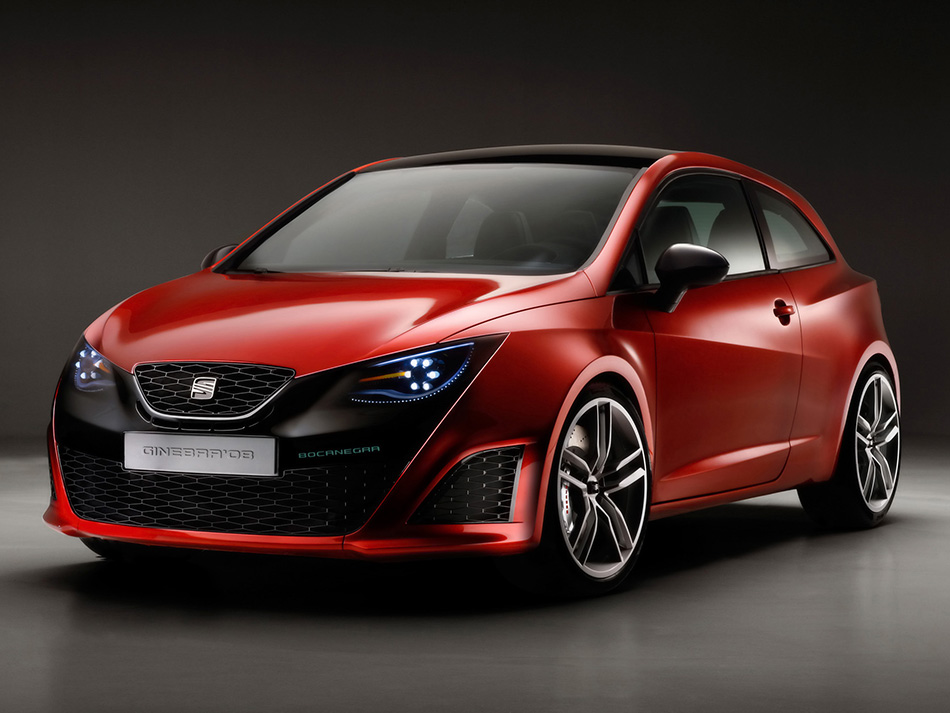 The eye is instantly drawn to the spectacular front end that gives the model its name – ‘Bocanegra' – which literally means ‘black mouth'. The top half is capped by a stunning, dark Perspex finish from which only the headlight units, with their state-of-the-art LED technology, peer out.

The two-door body boasts a clear coupe-like silhouette that is given added emphasis by the semi-transparent black front end. Indeed, SEAT aficionados may even spot that this car recalls distant memories of the launch of the original ‘Bocanegra', the legendary SEAT SportCoupe.

The appealing effect produced with the front headlights is complemented by the outline encircling the brand's insignia, which itself sports a new look. Instead of the chromed brand symbol the classic ‘S' appears in black, silhouetted by a chromed line. Its depth, which makes it appear more three-dimensional, and its black finish are elements that stand out as a clear demonstration of the significant advance in quality already achieved by SEAT.

Another eye-catching feature in the same area is the front bumper styling: its overall appearance is akin to that of a mask in that it only accentuates the expressiveness and sporty nature that will be at the very essence of the Spanish brand's upcoming generation of models, due to begin arriving on the market shortly.

The ‘Bocanegra' also makes its mark with its tight-fitting exterior comprising a low roofline and still-compact four-metre length. This allows a perfect synthesis of a powerful, sporty character on the one hand and, on the other, the functionality, roominess and exemplary safety required for catering to practically all needs. The ability to move nimbly through city traffic comes guaranteed, while the track width and wheelbase promise swift, comfortable progress outside the city limits.

Moving upwards, yet another highlight of the ‘Bocanegra's' exciting exterior design is a vast panoramic sunroof that allows light to flood into the passenger compartment. Sporting a finish that matches the dark Perspex front end, it naturally harmonises the exterior colours for a consistent, dramatic, look.

The high-level side indicator repeaters incorporated into the door mirrors form an additional striking feature. The mirrors, in turn, inject an added touch of dynamism by being attached below the window line of the new SEAT SportCoupe. This elegant design trait, with a slender arm connecting the mirror housing to the door, creates a truly dashing look.

Seen side on, it is the stunning 19" alloy wheels – shod with ultra-sporty low-profile 235/35 tyres – that first grab the attention. This is an unmistakable declaration of intent by a car calculated to look as sporty as it feels.

Evolution of the ‘dynamic line'

The taut surfaces of the vehicle's flanks comprise three distinctive characteristics which give the new prototype's sporty character added impact and represent a key evolution of the Spanish brand's trademark ‘dynamic line'. Originating from the front end and following the bonnet line down to the centre of the door, the first line is virtually mirrored by another that descends from the rear end's powerful ‘shoulders' to the centre of the door. Both are underscored by a third line which bridges the divide between the two wheel arches. The purpose, again, is to clearly evoke the new sense of automotive style which SEAT now conveys.

Meanwhile, at the back of the car, it is the expressive, robust looks generated by very boldly contoured shoulders that stand out. Also housing the tail light units, these rear shoulders indisputably bestow a more potent image.

Adorning the centre of the hatch is, once again, the brand insignia which, like its counterpart at the front, sports an all-new black look with a chrome outline and doubles as the handle for opening the luggage compartment. Proudly displayed across the centre of the hatch, below the insignia, is the prototype's historic name: ‘Bocanegra'.

Lower down, these elements give way to a sporty exhaust integrated into the centre of the rear bumper, flanked by characterful, mesh-style wings.

To round off the exterior, special mention must also be given to the dramatic, innovative LED light units which are perfectly in keeping with the vehicle's innovative design. Masked by dark Perspex at the front, and incorporated into those particularly pronounced shoulders at the rear, the LEDs form perfect design highlights in the undeniably sporty ‘Bocanegra'.

Inside, SEAT's dramatic concept car is an impressive fusion of exciting design and extraordinarily high quality. It is an area in which the SEAT design team has taken meticulous care, right down to the finest detail.

One of the principal objectives for the interior styling was to produce a space offering functional, practical elements together with flawless quality, and this has been achieved in every respect. The interior of the ‘Bocanegra' is distinguished by an impressive variety of tones and textures. Its front end is dominated by the dashboard with its sporty, light styling. Minute attention to detail is the key, and the centre console, where the climate control can be found, is testimony to this.

Elsewhere inside, the height- and reach-adjustable steering wheel in the ‘Bocanegra' is not perfectly spherical; it has a sporty triple-spoke design and two flattened sections on either side that make it easier to grip. Naturally, it bears the brand insignia in the centre, and also incorporates paddles for operating the seven-speed DSG gearbox and controls for activating the various functions needed to operate external devices connected to the vehicle via Bluetooth.

As expected, the instrument cluster stays true to the brand's sporty styling. Positioned between the two new-look dials is a hi-tech central screen that functions as a telephone display. Phone and other functions are accessed using the steering wheel controls, thereby maximising the connectivity between vehicle, driver and other peripheral devices such as telephones.

Each dial is made up of three concentric rings with needles pointing to the 6 o'clock position. Both incorporate the indicator signal in the centre, with the right-hand dial including various other telltale lamps for the vehicle's functions.

The rings are made of transparent material, the first featuring a large scale and the second showing much more precise readings for the rev counter and the speedometer, which both feature white backlighting. Concluding the tour of the driver's cockpit in the "Bocanegra" are sports pedals with metal plates.

The design of elements such as the armrest, the zone around the central tunnel and the seats has a very light feel to it thanks to the inclusion of leather and semi-transparent Perspex trim. The door trim panel replicates the concept of the dashboard, deftly combining metallic mesh sections with the colour scheme that runs throughout the vehicle.

The "Bocanegra" is fitted with well-designed and attractively styled bucket seats, which offer optimum support for the occupants out on the road. A brown leather strip runs the length of the seat's outer perimeter, giving it a unique surface finish. The headrest is integrated into the top section of the seat as a floating element with a zone for communicating between the front and rear.

The interior seat sections are upholstered in quilted black leather, reminiscent of that used in classic sports cars, while the side bolster cushions are trimmed in brown leather to coordinate perfectly with the interior colours.

Coupling this highly efficient 1.4 TSI twin-turbo power unit to the speed and sportiness of the DSG transmission promises a thoroughly enjoyable drive for enthusiast and everyday motorist alike. Add to this the option of operating the gearshift by means of the paddles on the steering wheel and the sublime stability and precision of SEAT's signature ‘Agile Chassis', and drivers are able to enjoy sporty motoring at its very finest.

The 1.4 TSI twin-turbo unit in the ‘SportCoupe' also promises modest CO2 emissions thanks to its small displacement. Thus the ‘Bocanegra' upholds the brand's pledge to reduce CO2 emissions of all its engine variants. Clearly, this promise is already being delivered with the launch of ECOMOTIVE versions of the Ibiza and Leуn.

At the same time, the new vehicle's considerable track width enhances stability when driving at speed, as well as the dynamic handling characteristics when travelling by motorway.

Dynamic and enterprising in nature, the ‘Bocanegra' has, then, been created to stir the emotions of those who relish sporty driving allied to a unique style and personality. By so doing, it stays true to the values of a brand that endeavours to produce models which distinguish themselves through innovative design, sporty character and exceptional quality and value.