Looking every centimetre a road-legal racer, the Kia provo concept, unveiled at the 83rd Salon International De l'Auto in Geneva, mixes ultra-modern technology with a self-confident and agile look to deliver an exciting new B-segment car for enthusiasts.

This is a car designed for fun - pure and simple. Every curve, crease and line combines to bring provo to life with a single purpose - to delight and entrance its owner and to bring a smile to the driver's face. The car is meant to be cheeky and cheerful in its compactness and to hint at the fun awaiting on the open road.

Created to deliver a new interpretation of the DNA from sporting coupes of the past with all the advantages of up-to-the-minute technology and materials, provo blends a clean, simple yet muscular exterior with a stunning interior treatment mixing high-tech and luxury materials that will set pulses racing whether on busy city streets or at the race-track. 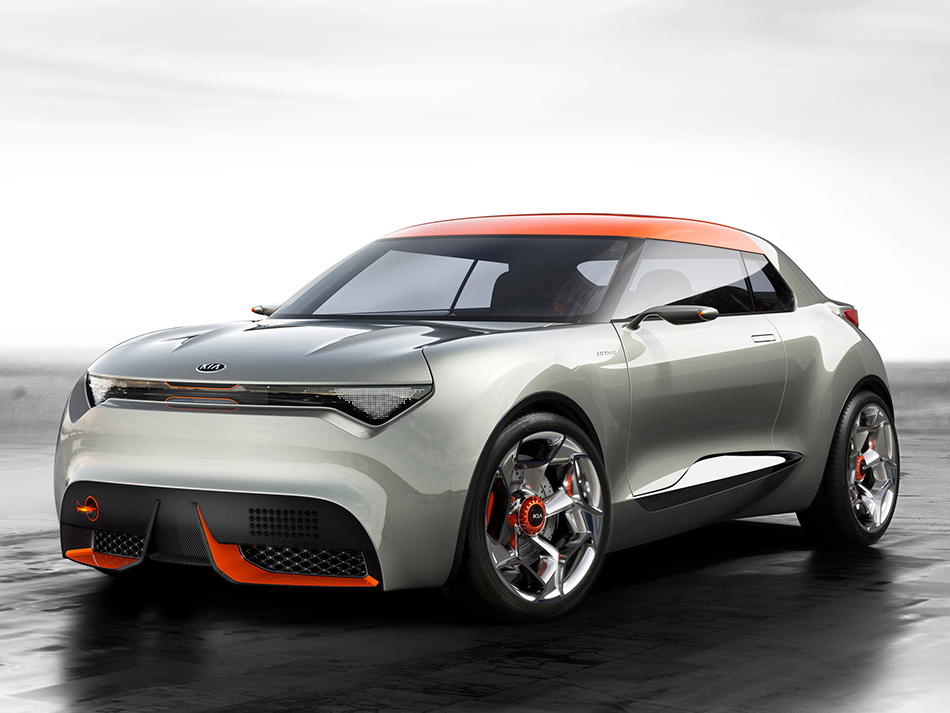 Described by Gregory Guillaume, Chief Designer at Kia's European styling base in Frankfurt, as "an emotional and muscular car aimed at delivering pure fun and performance for today's city-based enthusiast driver who longs for the curves of the open road," the Kia provo isn't just a styling exercise. It combines a 1.6-litre Turbo GDi engine producing 204 ps with smart-4WD-hybrid technology from an electric motor delivering an additional power surge to the rear wheels when required and also allowing low-speed electric-only motion. A seven-speed DCT transmission - Kia's first - completes the impressive technical package.

Guillaume went on: "This is entirely a car for European tastes and conditions. Designed purely at our Frankfurt studios the Kia provo concept was conceived as a confident and single-minded statement of dynamism and energy to deliver a new sense of fun into the B-segment. The potent shaping displays a balanced and refined outline within a compact overall shape and the tiny front and rear overhangs enhance the balance within its proportions."

Clearly a car from Kia, the compact provo which is 3.88-metres long, 1.77-metres wide and 1.35-metres tall, introduces itself with a steep front nose and carbon fibre lower valance that immediately convey a sense of purpose.

Hidden behind a single piece of glass is the latest take on the Kia's 'tiger nose' grille treatment linking straight into the Schreyer-inspired headlamp units that are made up of more than 850 tiny LEDs. The programmable LEDs can be used to provide daytime running lights, full beam or even race-style configurations - as well as more humorous and decorative displays to add to provo's sense of fun!

This thin, sharp glass panel is echoed at the rear of provo's body and separates a purposeful splitter-style lower valance from the long, flat bonnet panel sculpted with twin creases to hint at, but not slavishly copy, the muscle cars of old.

A wrap-around front screen hides the A-pillars and frameless doors, giving a visor-style appearance to the cabin glass with the clamshell-like roof floating above. This is divided at the rear by different colour sections rising up from the C-pillars in an almost roll-over bar appearance.

Colour is used on the Kia provo concept to enhance the almost-masculine stance with sharp points echoed throughout the design. High-intensity blood-orange accents contrast with the grey-green 'Storm Metal' body colour to draw the eye to particular aspects of the structure and equipment, while carbon fibre surfaces interplay with traditional materials and high-gloss or anodised aluminium to strengthen the connection to the track cars that inspired provo.

Planting provo firmly in touch with the road are distinctive 225/40-shod, 19-inch milled-alloy wheels with a traditional 'cast' look fixed by single centre nuts finished in anodised blood-orange. And with just a 2.53-metre wheelbase, exciting handling and road-holding is guaranteed.

But, this potent internal combustion engine also benefits from a regenerative-powered electric motor driving the rear wheels either automatically when required during cornering and in strong acceleration - giving a power boost of as much as 45 ps - or in a button-activated creep-mode at low speeds to avoid emissions in city traffic or when 'stealth' is required. The regenerative system captures its power during braking when in normal use.

Moving inside, the Kia Europe Design team was able to let imaginations run free although in typical Kia fashion it delivers clear functionality with exuberant style - essential if provo is to go into production at some point in the future.

Guillaume commented: "The interior is very, very black - as we believe it should be to allow drivers to focus on the experience. But we have also looked to make the functional aspects of the car fit the modern demands of today's motorists."

Opening the two side doors - via flush-fitting push-up electronic handles that operate with a satisfying electric click - reveals that the polished aluminium panels featured in the external sculpted flanks extend to create a relatively high-level two-step sill into the car - cut-away at the leading edge to allow easier ingress and exit.

The next surprise is the door construction itself - the doors are made from three individual panels - the outer panel, a carbon-fibre inner panel and a neoprene-covered inner section that also features the Storm Metal body colour. The inner door releases are reassuringly solid polished aluminium.

The dashboard is made from a single expanse of carbon fibre, but does not extend down to the floor - deliberately - in order to keep the footwells clear and uncluttered except for polished aluminium footrests and pedals.

Echoing the sculpted flanks of the Kia provo concept, the dashboard has a business-like main binnacle containing large analogue dials on a digital display and a smaller central display of other minor gauges, but because the display is digital it can be programmed to offer a selection of functions. Set on the centre tunnel are two control hubs - the engine stop-start button and drive selector for the seven-speed DCT transmission and a Multi-Media Interface control.

This latter control allows the driver to select a variety of screen displays - as well as controlling infotainment functions. In 'normal' mode the driver sees a speedometer, rev counter and sat-nav route instructions. In 'cruise' the display is centred on a large scale map, route instructions and a speedometer, while in 'track' mode the display features just a large rev counter, a track-map and a lap-timer. There is also a full 'entertainment' mode allowing visuals of music, radio and other information.

The centre-mounted display provides appropriate gauges to the mode with a series of aluminium toggle switches set underneath - including an anodised blood-orange toggle for the hazard warning lights.

Modern materials allow the front seat construction to be made from a single wave-like panel running from one door sill to the other - covered in quilted leather. The seat backrests are cleverly mounted on a rotating aluminium track so that instead of folding forward, they spin into the centre of the vehicle allowing easy access to the admittedly occasional-use rear seats.

Guillaume commented: "The whole interior concept was designed around not having a big centre console, but instead using latest technology to provide excellent functionality in a clean, clear and attractive manner. 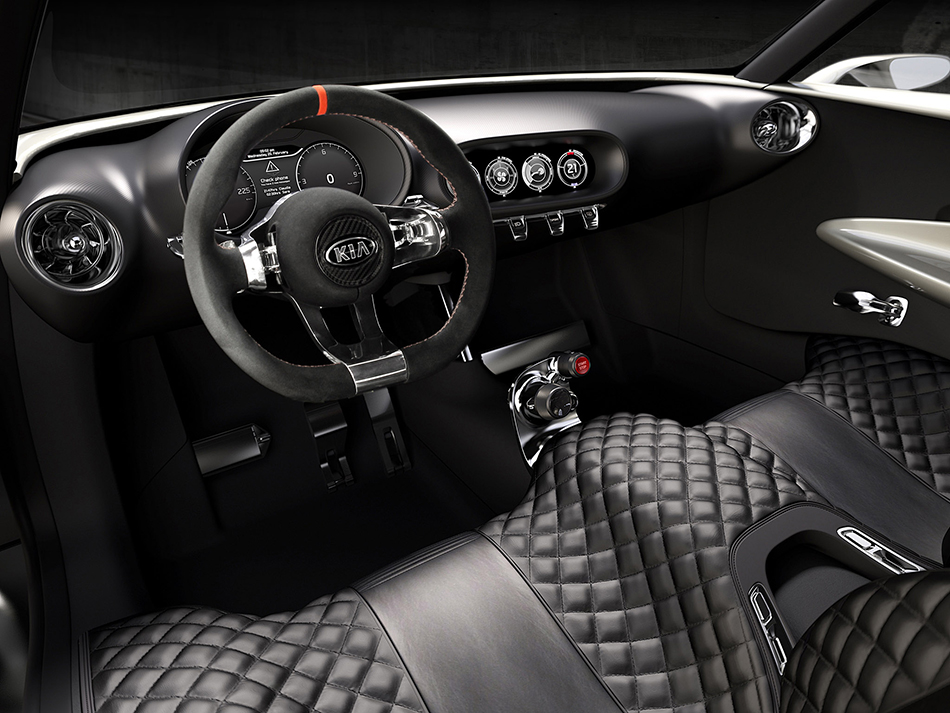 "By using a DCT gearbox we were able to get rid of the floor-mounted gear-shift and use paddles behind the steering wheel, which has blood-orange stitching and a race style straight-ahead indicator, allowing us to use the floor space for other controls resulting in a much tidier environment. And because the seats are fixed we have full electric adjustment for the pedal box and steering column - further simplifying the interior and giving a perfect-fit for any driver."

Completing the moody cockpit feel are tiny red LEDs set in the multi-layered doors, in the air vents and also in roof to give a low-glow ambient illumination. The roof panel also incorporates aluminium window toggle controls.