Delivering a bold and exciting, coupe style with a driver-focused cabin, Kia's latest concept car, the Novo, has been unveiled at the 2015 Seoul Motor Show.  Giving clear hints at future Kia styling and strategy the Kia Novo is aimed at modern urbanites with stressful jobs and frantic schedules. Interpreted by Kia's designers, the name ‘Novo' represents the concept of making something new and fresh.

Taking its name from the Latin ‘novatus'  the Kia Novo concept establishes a calming, focused environment in which drivers can refresh and rejuvenate as they transition from one life commitment to the next. 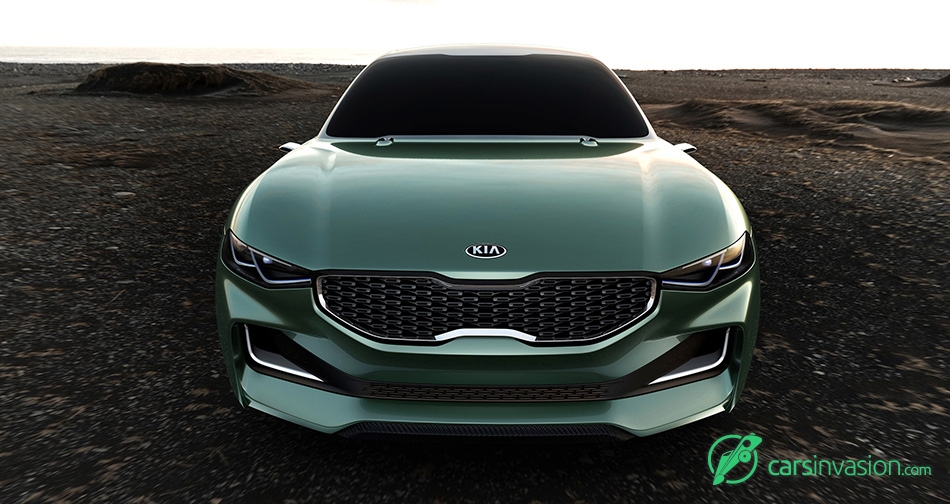 Designed at Kia's Namyang design centre in Korea, on a specially-adapted version of Kia's C-segment global platform, the Novo has a coupé-inspired silhouette. The Novo's minimal front overhangs, longer rear overhangs and fastback roofline, as well as a slim, long glass area, give it a raked, sporty profile.

The smooth, geometric design of the car's shape is blended with a series of sharp, decisive lines and forms around the body. The front of the Novo sports the latest interpretation of Kia's hallmark ‘tiger-nose' grille, now wider and more deeply embedded, and slim, new laser headlamps. Low, wide air intakes house additional laser headlamps, which frame the Novo's bold face, emphasise its low, wide stance and give the car a unique light signature.

The large front wheel arches lead directly into a strong, consistent shoulder line to meet the rear laser lamps, whose shape echoes those of the front for an identical light signature. The rear of the car uses prominent lines and low triangular exhausts to add greater width and volume to its shape and emphasise the car's sportiness and on-road stability. Crisp lines surrounding the rear of the car ensure a high aerodynamic efficiency.

The Novo's sharply creased bodywork gives the car a clean, modern appearance when viewed from the side, with strong lines on the doors, skirts and aluminium wing vents. Rear-hinged doors complete the car's striking profile appearance, with slim, central pop-out door handles running level to the finely-sculpted aluminium door mirrors. The Novo's diamond-cut alloy wheels feature a similarly sharp design, made up of straight edges and two-tone carbon and silver finish. Completing the Novo's thoroughly contemporary look are an aluminium rear roof line and two-tone silver and green paint finish.

Designed as a sanctuary from the frenzied outside world, the Kia Novo's cabin is a relaxing space in which to temporarily escape the stresses and strains of modern life. Focused solely on the driver, the minimalist interior provides few distractions from the task of driving, while all occupants benefit from plenty of space, a result of the car's long body and intelligent packaging. The long, wide dashboard, whose sharp lines are embellished with the use of leather and aluminium highlights, is angled towards the driver. The instrument binnacle shows relevant information through a compact three-dimensional hologram display, while a ‘blind control' touch pad next to the steering wheel allows drivers to control the car's many functions without having to take their eyes off the road ahead. The touch pad incorporates a fingerprint scanner, which automatically sets up elements of the car according to the driver's preferences, such as music selection, audio volume and the type of information displayed. A wide touchscreen in the centre of the dash displays the car's full range of functionality to occupants.

As well as the neat, simple design forms that make up the dashboard and centre console, the interior's four individual dark brown leather sports seats add to the minimalist ambience of the cabin, each made up of simple linear shapes and featuring built-in inertia reel seatbelts to minimise ‘cabin clutter'.

The Novo is powered by the latest high-tech production Kia powertrain to match its dynamic looks. A 1.6-litre ‘Kappa' turbo gasoline direct injection (T-GDI) engine has been paired with the brand's seven-speed DCT to power the front wheels. The result is decisive, sporty performance and impressive fuel economy for Kia's latest star.

The Kia Novo concept is fitted with innovative new ‘adaptive concave profile' tyres, with a sunken middle section between two contact points serving to cool the rubber and channel excess road water away from the wheels for greater grip. The unique 20-inch tyres feature two slim contact points on the outer edges to provide lower rolling resistance and reduce road noise, while providing a high level of grip.