Presented as a concept car in 2003 in Detroit - where it generated significant interest among Italian supercar enthusiasts - the production version of the Murciélago Roadster makes its official debut at the Geneva Show 2004. Manufacture and sales are planned for the second half of this year for the Roadster.

The latest arrival at the House of the Raging Bull takes its inspiration from the great Italian tradition of open vehicles.

As powerful, fast and extreme as the Coupé version from which it derives, the Lamborghini Murciélago carries on Lamborghini's twelve cylinder roadster tradition: from the 350 GTS to the Miura Roadster, right up to the most recent Diablo Roadster.

This has been achieved without compromising the performance expected from a real Lamborghini. Thanks to accurate design, the open version also delivers excellent handling, acceleration and driving safety characteristics. 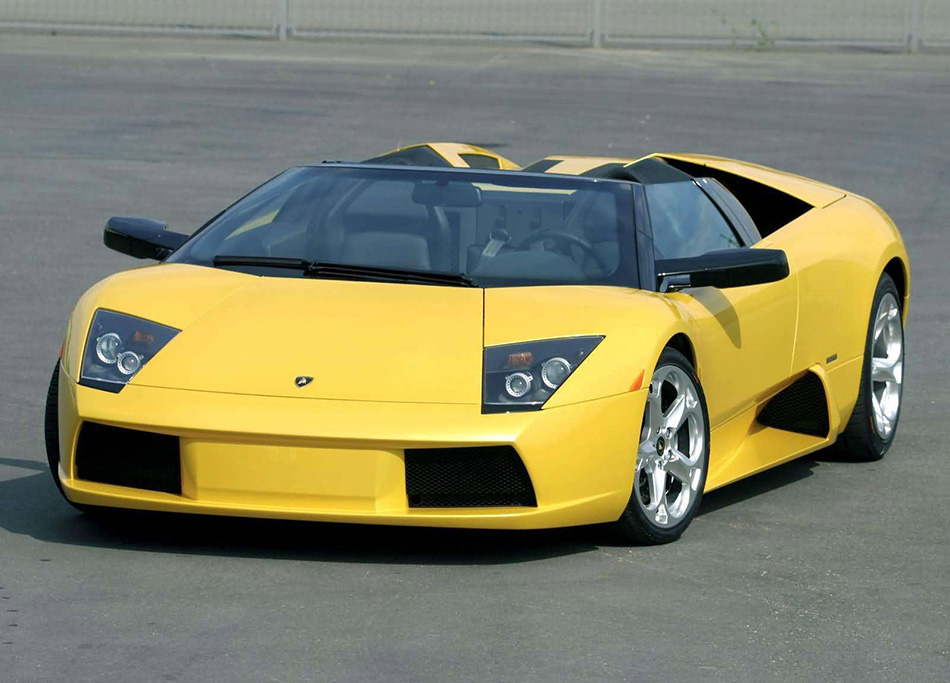 The Murciélago Roadster version builds on the extreme and exclusive features of the Coupé thus confirming it as a real "icon" of the Lamborghini brand.

As with the Coupé, the design of the Murciélago Roadster is exclusive, aggressive and extreme.

In creating the Roadster, the designer Luc Donckerwolke did not restrict himself to "cutting off" the roof of the Coupé. He bestowed it with its own sensational appearance, making the Murciélago Roadster a truly unique model. A model which in series production has retained all the emotional impact of the initial concept itself.

The exterior design is characterised by a true muscularity that interacts with aggressive lines, exploring the whole language of Lamborghini design and raising it to a new, higher level.

The aggressive, exclusive and extreme themes are also reflected in the interior design, with streamlined headrests that perfectly integrate mobile air vents and "asymmetrical" leather upholstery. This enhances the whole driver's part of the cockpit.

The front and lateral glass parts have been designed like a crash helmet visor, in order to integrate perfectly with the structure of the vehicle. In order not to alter the aesthetics of the car, the electronically controlled safety roll bars are automatic, extending only when necessary. As a result, optimum vehicle aerodynamics are maintained.

The newly conceived wheels are also in harmony with traditional Lamborghini design, with round holes that intersect the spokes.

There is easy access to the bonnet, which is opened at the front as was the case with the legendary Miura.

Finally, the exhausts are also new, with a more aggressive "section" than the Coupé.

The Roadster differs from the Murciélago Coupé in certain important technical details. Various structural chassis components - in steel and carbon - have been redesigned to ensure adequate torsional stiffness, even though there is no roof.

In particular, there is a special stiffening lattice on the engine compartment structure. As an optional feature, this lattice is also available in a visible carbon fibre version.

Without altering the extreme features of the car, there is also the option of mounting a soft top roof ("R-top") which, as in the tradition of this kind of model, is only designed for temporary use (for example in the case of sudden rain) and at a recommended maximum speed of 160 km/h.

Particular attention has been paid to safety. As mentioned previously, the Murciélago Roadster is equipped with an automatic, electronically-controlled roll bar, which extends from its housing behind the seats in only a few milliseconds during a roll-over emergency.

The engine is obviously the Lamborghini 12 cylinder 60° V, with a displacement of 6192 cc, producing 580 hp (426 kW) at 7500 rpm and a maximum torque of 650 Nm at 5400 rpm. The engine features the Lamborghini L.I.E. electronic engine management system. The standard gearbox is a 6-speed manual, like the Coupé. As an optional feature, a 6-speed "e-gear" automatic version is available.

There is also Lamborghini permanent four-wheel drive on the Roadster, with a central viscous coupling and limited slip rear and front differentials (45% rear, 25% front).

The braking system is the H-type with power braking, with ABS and four ventilated disks.

The maximum speed of the Murciélago Roadster (depending on aerodynamic configuration) is circa 320 km/h. The recommended maximum speed with the roof in place is 160 km/h.

Despite the absence of the roof, structural modifications have ensured excellent levels of rigidity. This rigidity and the optimised suspension ensure that driveability and performance are definitely not inferior to those of the Coupé. Lap times for the two versions of the Murciélago at various handling circuits have proven to be more or less identical.

The Murciélago Roadster is more extreme and exclusive than ever, also with respect to the interior. This has "asymmetrical" leather upholstery: the left side has different material compared to the right and is perforated. That part of the cockpit designed for the driver is oriented towards him/her, so it is a real "Pilot Oriented Challenger".

The left side door panel also has "perforated" cladding, whereas the central part of both seats is made of alcantara. The headrest area has been modified to allow the use of the glove compartment nets in the area between the cockpit and the engine.

The steering wheel is also upholstered in leather and partially perforated. In the centre is the Lamborghini coat of arms.

Sitting at the wheel of the Murciélago Roadster, everything is under control, just as on the Coupé version.

The instrumentation is clear and precise, with body computer and trip computer. Among other driver aids are electric control for the electrically-heated wing mirrors, a non-reflective rear view mirror and the axle lifting system, which allows the front axle of the vehicle to be raised by 45 mm at low speeds.

Among the optional features planned for the Murciélago Roadster are a carbon fibre version of the special stiffening lattice on the engine compartment structure (which is in black steel on production models), a carbon fibre internal engine cover, and "windbreaks" behind the seats and on the windscreen.