Two years after the launch of the Coupé version of the Gallardo, Automobili Lamborghini had presented the Lamborghini Gallardo Spyder at the 2005 Frankfurt Motor Show.

The Lamborghini Gallardo Spyder is not just an open-top version of the Coupé, but is a completely new model. It has an attractive new design and a unique system for opening and closing the fabric roof that utilises the engine compartment to store the folded roof.

The Lamborghini Centro Stile and engineers from the Research and Development team have worked in close partnership to develop this new design and to bring these clean and sharp lines on the road. 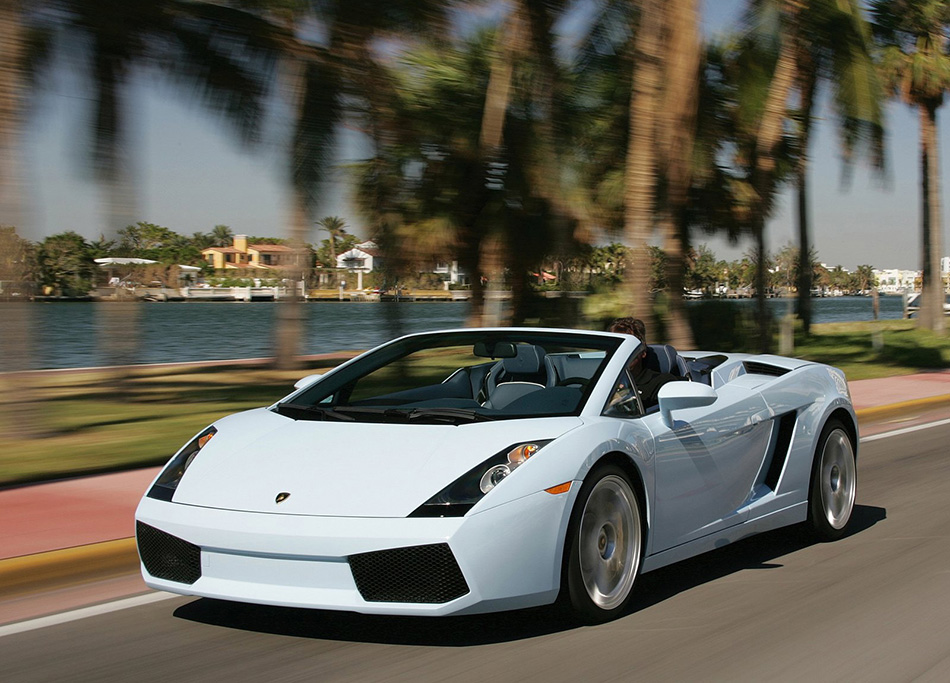 The original design vision for the Gallardo was created in the year 2000 and this vision continues with the "open" version.

The dimensions of the Gallardo, combined with its competitive performance targets, ensure the car has an athletic compactness. The long wheelbase complemented by short overhangs dynamise its appearance. The Lamborghini Gallardo Spyder features typical and unique mono-volume proportions, which integrate the Lamborghini design attributes of purism, athleticism and sharpness.

The cab-forward cockpit is integrated in the body by a strongly-slanted front screen and tensed pillars. The complex surfacing is intersected by crisp graphics and its detailing, which is orientated towards optimum cooling, evokes a strong aeronautical influence in its proportions and formal language.

The roof raising/lowering system of the Lamborghini Gallardo Spyder is based on an electronic control system with electrohydraulic actuators and comprises the following elements:

The roof raising/lowering mechanism is extremely simple to operate by way of two push-buttons on the centre of the dashboard. And the whole operation takes just over 20 seconds.

The rear screen moves automatically while the roof is being opened or closed. This automatically-controlled movement always returns the screen to the raised position. The driver can also choose to have the screen in the lowered position (also with the roof raised) by pressing the appropriate button on the dashboard.
There is also a "service function" that positions the roof so as to allow access to the engine.

Great care has been taken over the structural design of the Gallardo Spyder, which of course complies fully with all the relevant safety standards.
The space frame has been reinforced in the area of the sills and the A pillars have been strengthened with the adoption of an automatic Roll Over protection system (comprising two "pop-ups") integrated with the air bag system.
All these solutions, which place Lamborghini at the very forefront of open top car design, were driven by the need to present to the public a true spyder characterised by a pure design.

The new Lamborghini Gallardo Spyder features a number of important modifications to the original engine and transmission from the Coupé.

The steering is also more direct and precise and the suspension has been recalibrated.

Like the other models in the range, the Gallardo Spyder also benefits from aluminium bodywork and features permanent four-wheel drive.

And finally, its performance figures: the Lamborghini Gallardo Spyder - which complies with EURO 4 homologation standards - reaches a top speed of 314 km/h with the roof up and 307 km/h with the roof down, accelerating from 0 to 100 km/h in 4.3 seconds.

Amongst its standard equipment the following items are particularly worthy of mention:

There are also new body colours available. In addition to those current range of Gallardo colours, the Gallardo Spyder is also available in the two special colours: Celeste Phoebe (light blue) and Verde Picus (green). There are also new colours also for the leather interiors: Marrone Janus (brown) as the main colour, Bianco Polar (white) as a contrast colour, and carpets in Marrone Janus (brown), Rosso Centaurus (red) or Arancio Leonis (orange).

There is also a range of optional equipment that makes the Lamborghini Gallardo Spyder even more exclusive, including:

Other optional equipment (also on the Coupé version) includes: