ADAM, Vauxhall's stylish urban-chic city car, took the fashion-led A-sector by storm when it went on sale last year. Now the latest edition to the Vauxhall range, the ADAM ROCKS AIR is set to extend the ADAM family further.

Debuting at this year's Geneva Motor Show, ROCKS AIR has a bespoke body style, offering the same contemporary style as the original ADAM but with the toughness of a crossover and the coolness of an electric folding canvas roof.

Being first to market means there is no direct competitor to ADAM ROCKS AIR, giving this latest new Vauxhall the opportunity to grow the ADAM range even further.

However elements of the ROCKS AIR can be seen in the MINI Paceman (as it also combines the qualities of both an SUV and a coupe) and the Fiat 500 Cabrio, with its folding roof.

ROCKS AIR shares the same postmodern target customer as ADAM.  These are stylish, trend-setters who are very image-conscious.  Such individuals want a vehicle that expresses their personality and individuality.

This group is predominately under 35 and pre-family and is split 60:40 female to male. These young urbanites also influence other more mainstream buying groups outside of the auto sector.

A secondary ROCKS AIR target customer will be those with families looking for a second car with bags of style and personality. 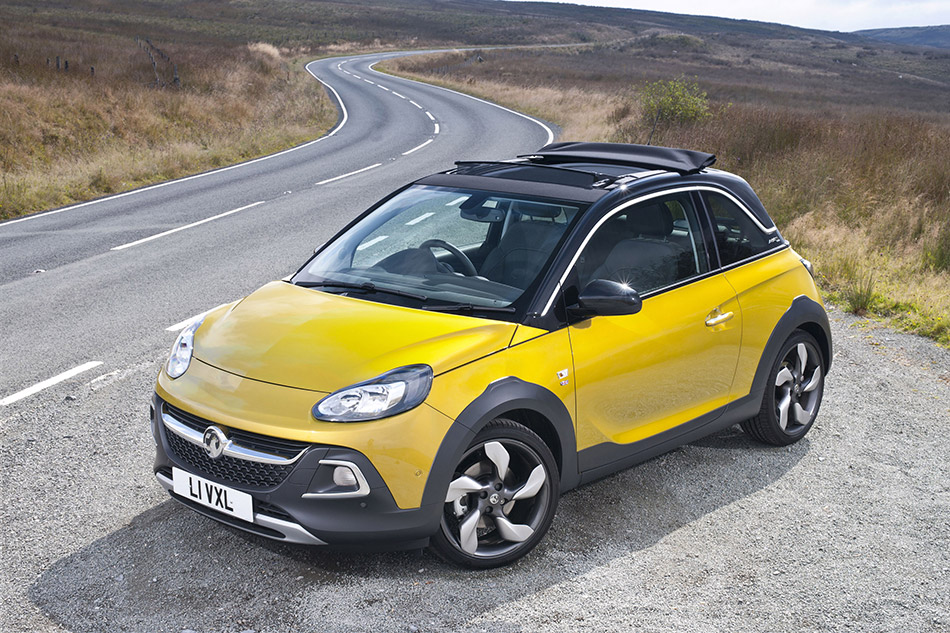 ADAM ROCKS AIR went from concept car to production readiness in just twelve months. It was developed at Vauxhall/Opel's International Technical Development Centre in Rüsselsheim, Germany and, like the rest of the ADAM family, is built in Eisenach, Germany.

The A-segment into which ADAM ROCKS AIR slots is growing rapidly, seeing growth of 15 per cent between 2012 and 2013 and a further 10 per cent in the first half of this year versus the same period last year.

Over 100,000 ADAMs have been registered across Europe since its launch with other important markets including Germany, Italy, France and the Netherlands.

Keenly priced from £14,695, ROCKS AIR is available to order now with first deliveries expected in September.

"ADAM ROCKS AIR combines the toughness of a crossover with the coolness of open air driving," said Stuart Harris, Vauxhall's Head of Carline Brand. "It's the perfect ADAM for active drivers wanting to stand out from the crowd."

Compared with other members of the ADAM family, ROCKS AIR is taller, wider and tougher in appearance, while also offering an electric folding canvas roof.

ADAM ROCKS AIR's new crossover body style is supported by a chassis that is raised 15mm and has a wider stance. Agile parkour athletes, who move from one place to another, negotiating urban obstacles in between, were the inspiration for this sporty crossover.

Parts of the chassis have been modified or re-tuned – including dampers, springs, the rear suspension geometry and steering. The higher, wider looks are matched by a choice of standard 17-inch or optional 18-inch alloy wheels. These can be further personalised with new wheel clips in "Wild" design and different colours that are unique to ROCKS AIR.

Protective, anthracite-coloured cladding is wrapped tightly around the ADAM ROCKS AIR, giving it a tough, muscular look. The front trapezoidal grille, with a chrome central brand bar, is embedded in the cladding, while contrasting, satin chrome ‘boomerang' elements frame the front fog lamps/indicator housings and the reversing/fog lamps at the rear. An integrated rear roof spoiler and LED daytime running lights also come as standard. Silver skid plates front and rear and a bold chrome exhaust complete the exterior design.

ROCKS AIR combines its rugged individuality with open air fun. The electric folding canvas roof is operated via a button located in the front area of the headliner and folds back neatly on to the C-pillars in just seven seconds. The roof can be opened or closed while the car is moving at up to 85mph. Creating a wide opening, this stylish system has no negative impact on body stiffness or on the car's functionality: the boot keeps the full opening of a hatchback and loading volume remains untouched.

The entire roof module is acoustically tuned for noise insulation inside the cabin, and the robust, three-layer fabric has a neoprene centre for weatherproofing and durability. The folding canvas roof is available in a choice of two exterior colours – Black or Sweet Coffee – that combine with the different roof colours of the ROCKS AIR.

ROCKS AIR's cabin has its own distinctive character. Two new, exclusive ROCKS AIR interior trims have been created. They include a main instrument cluster, seat and door panel colours and other trim elements – all unique to ROCKS.

Lightweight, all-aluminium construction, with a cylinder head-integrated exhaust manifold, contributes to low weight with the 1.0 ECOTEC tipping the scales at just 106kg.

Fuel-saving Start/Stop technology is an integral part of the system and offered as standard.

The new three-cylinder engine is mated to an all-new six-speed manual gearbox with a compact package design.

Called M1X internally, the new gearbox is distinguished by its improved efficiency and benchmark shift quality. Vauxhall engineers have achieved greater operating efficiency through optimally stepped gear ratios, a longer final drive ratio and low friction design for internal components. Weighing less than 40kg, the M1X is one of the lightest gearboxes on the market. It is also robust. With an impressive maximum torque rating of 220Nm, it is thoroughly engineered for hard work.

The new 1.0-litre ECOTEC capacity belies its strong performance. Top speed is 121mph with 0-60mph reached in just 9.9 seconds. A strong mid-range, particularly between 50 to 70mph, illustrates an abundance of torque, meaning that drivers needn't rely on high revs to extract the most from the engine.

Despite the new 1.0-litre's performance, it achieves 55.4mpg on the combined cycle with CO2 emission of 119g/km. The new three-cylinder unit already complies with future Euro 6 emission standards.

The new 1.O-litre ECOTEC engine tops a powertrain portfolio including two current four-cylinder naturally-aspirated units comprising a 1.4-litre with 87PS and a 1.2-litre with 70PS.

Both engines are mated to five-speed manual transmission and can be specified with an ecoFLEX technology pack that further enhances their efficiency.

The ADAM ROCKS AIR's suspension system, McPherson struts on a sub-frame up front and a torsion beam at rear, has been modified to suit a wider range of use. The car's off-road character is underlined by a 15mm increase in ride height compared into ADAM wearing identical 17-inch wheels, giving this mini crossover SUV-like ground clearance of around 14cm.

ROCKS AIR's rugged good looks are emphasised by wide front and rear tracks (1,472mm and 1,464 mm respectively) which, combined with a 2,311mm long wheelbase, also ensure a high level of driving stability and comfort. The ROCKS AIR can also be ordered with optional 18-inch wheels.

To cope with the demands of the urban driving, the ROCKS AIR's electric power steering includes a special ‘CITY' mode, which is easily activated at the press of a button. It increases power assistance at lower speeds to make manoeuvring in tight spots even easier.

Like its ADAM siblings, ROCKS AIR is one of the best connected small cars around thanks to its state-of-the-art IntelliLink infotainment system. Priced from just £275, it allows seamless integration of Android as well as Apple iOS smartphone functionalities into the car.

It provides USB and Bluetooth connectivity, audio streaming, a seven-inch high-definition colour touch-screen and seven speakers. Clever apps including BringGo, Stitcher and TuneIn can be downloaded. 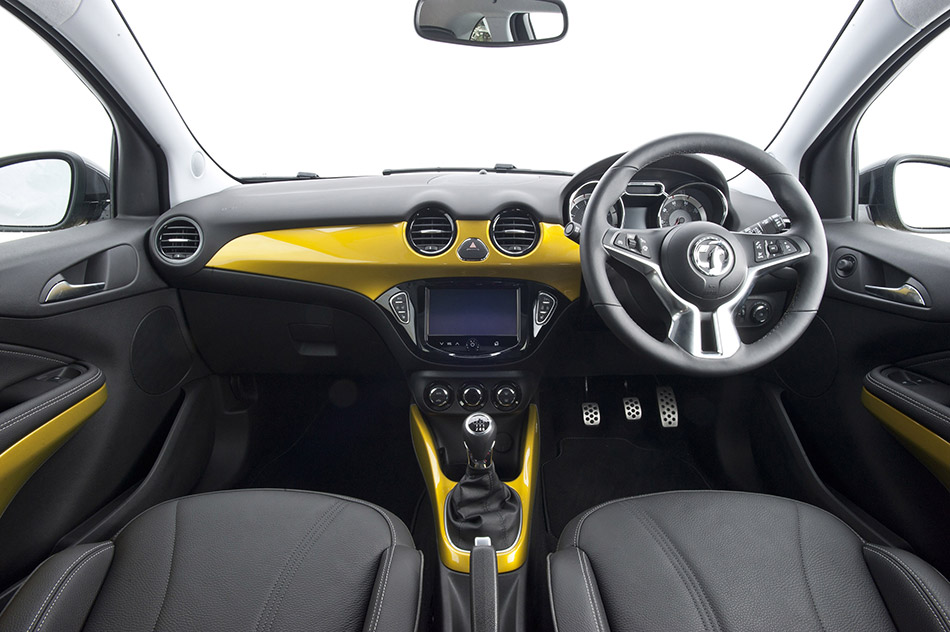 The integration of Apple iOS devices into the system enables Siri Eyes Free voice control. This makes it possible for drivers to have incoming text messages read aloud and to dictate text messages or emails while they keep their eyes on the road and their hands on the steering wheel.

Hands-free phone calls can be made without dialling: the driver selects a name from the stored directory (with up to 1,000 contacts) visible on the touch-screen, touches the "call" function and then carries out a conversation via the car's speakers. Telephone and audio functions together can be accessed and controlled via Bluetooth, irrespective of smartphone type.

Mobile mass storage devices, such as MP3 players, iPods, iPads, etc., can be connected to the infotainment system via USB or Bluetooth. In addition to the USB port, a 3.5-mm auxiliary input is also provided.

All this means ADAM ROCKS AIR drivers can select their favourite soundtracks using the touch-screen anytime and anywhere.

They can easily access personal photo galleries, slide shows, videos and other stored documents via the USB connection (and aux-in for videos for iOS Smartphones) for viewing when ROCKS AIR is stationary.

The standard infotainment equipment in ROCKS AIR is a CD 3.0 BT system, with radio and a MP3/WMA compatible CD player featuring Bluetooth and USB connections, as well as a hands-free function. The tuner can be combined with DAB digital radio, offered as standard, for a broad choice of listening options.

And for those who want the ultimate sound experience in their ROCKS AIR, an Infinity sound system is available for £300. It features eight speakers and a total of 315 watts with two tweeters, two front subwoofers, two rear wide band speakers, one mid-frequency range speaker and the sub-woofer box located in the trunk.

The BringGo navigation system can be downloaded as a map version for Eastern and Western Europe. Once downloaded, the map data remains installed on the user's smartphone, which means ROCKS AIR owners do not need a smartphone broadband connection to use the BringGo navigation system. BringGo solely uses GPS to locate the ADAM ROCKS AIR. An additional advantage of the app is that it can be connected to internet search engines. If, for example, ROCKS AIR drivers want to find a restaurant or hotel, they can just run a name search on the search engine and the results will be automatically displayed on the BringGo map.

Stitcher is a useful global podcast internet radio which lets users listen to programs live or after they have been broadcast. Once Stitcher is downloaded onto a smartphone, ROCKS AIR owners can access more than 10,000 podcasts on demand, including radio shows and live stations around the world, via ROCKS AIR' IntelliLink touch-screen.

With access to a global network of 70,000 radio stations, Tune-In has the power to offer entertainment to suit the tastes of every listener.

Standard on all ROCKS AIRs is Electric Power Steering (EPS) with a dedicated CITY mode. At the touch of a button, this function increases power assistance at lower speeds, particularly useful when manoeuvring in congested urban areas.

Hill Start Assist also comes as standard. It maintains the brake function for about two seconds after the driver has taken his/her foot off the brake pedal. This prevents ROCKS AIR from rolling back when starting on a slope or, when driving off from traffic lights or a parking spot on a hill.

APA always comes with Side Blind Spot Alert, which also uses the ultrasonic sensors to warn the driver of an imminent collision when changing lanes. The sensors have a range of three meters to the left and right of the vehicle, and also detect objects or other vehicles in the driver's ‘blind spots'.

Whenever another vehicle comes within range of the sensors, a warning LED illuminates in the relevant outside door mirror. If the driver still attempts to change lanes by using the turn indicator on the side where a vehicle is detected, the LED starts to flash. In this way, the system actively helps prevent accidents. The optional combined pack, comprising the up-level functionalities of Park Assist and Side Blind Spot Alert, is available for £450.

ADAM ROCKS AIR is the only vehicle in its class to offer the comfort of a heated steering wheel, driver and front passenger seats. Even on the coldest of winter days, Vauxhall's new urban crossover can provide pleasant extra warmth within one minute of pressing a button.