Lamborghini presents the ultimate driving machine among open-top two-seaters - the Lamborghini Reventón Roadster is a sports car of breathtaking fascination, menacing power and uncompromising performance. The 6.5 liter twelve-cylinder generates 493 kW (670 PS), catapulting the Roadster from 0 to 100 Km/h (0 to 62 mph) in 3.4 seconds and onwards to a top speed of 330 KM/h (205 mph). The open-top Lamborghini Reventón is not only one of the fastest, but also one of the most exclusive cars in the world - Lamborghini has limited the series.

The Lamborghini Reventón is not destined to remain a one-off. Less than 20 Lamborghini friends and collectors will be able to own this extraordinary car and, naturally, enjoy the incomparable pleasure of driving it.

Each Lamborghini Reventón Roadster will be sold for 1.1 Million Euro (without taxes). Deliveries will begin October 2009. 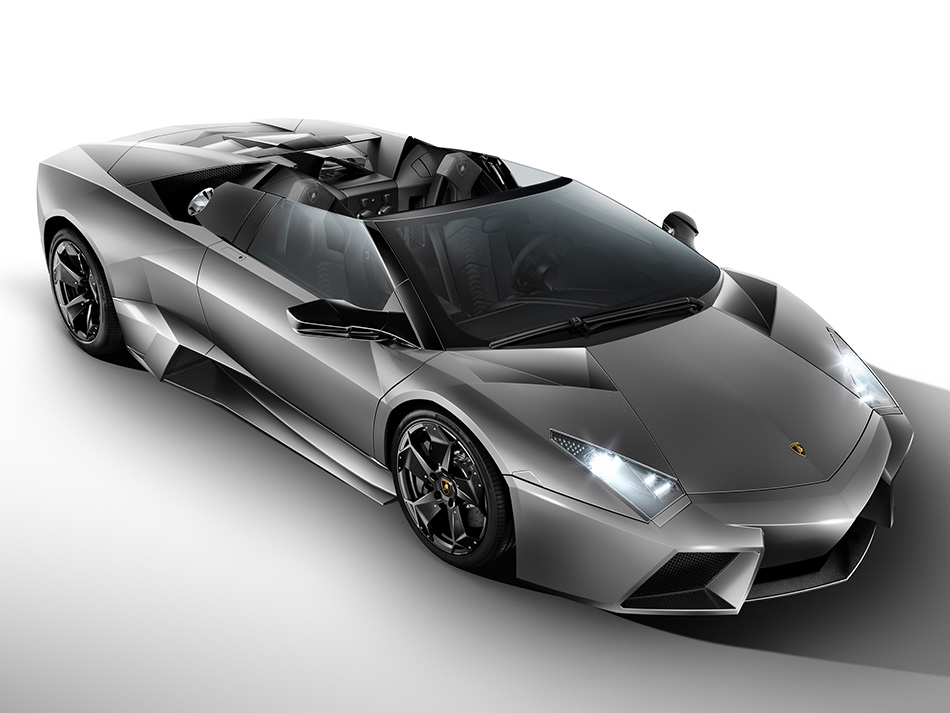 "The Lamborghini Reventón is the most extreme car in the history of the brand," comments Stephan Winkelmann, President and CEO of Automobili Lamborghini S.p.A. "The new Roadster adds an extra emotional component to our combined technological expertise - it unites superior performance with the sensual fascination of open-top driving." The Lamborghini Reventón Coupé was presented at the 2007 IAA in Frankfurt and was sold out immediately.

Open-top sports cars are a tradition at Lamborghini that stretches back over 40 years. In 1968, the company from Sant'Agata Bolognese built a Lamborghini Miura without a fixed roof as a one-off. The Lamborghini Diablo Roadster appeared in 1995 with its targa roof anchored to the engine cover.

All Lamborghinis are created with an avantgarde approach to design; a fast-moving technical sculpture. The Lamborghini Reventón Roadster is derived from the same creative thinking as the Coupé. Its designers found their inspiration in aviation - the aggressive wedge shape evokes images of fighter jets.

The powerful arrowhead form at the front, the mighty air intakes pulled way forward, the broad side skirts, the upwards opening scissor doors and the rear end with its menacing edges - the Roadster is clad in a design of maximum functionality and spectacular clarity. Details set stylish accents, such as headlamps featuring bi-xenon units with LEDs forming the daytime running lights and indicators. The rear lamps are also equipped with LEDs.

Behind the two seats are two hidden pop-up bars that deploy upwards in just a few hundredths of a second in the event of an imminent rollover. A fixed, horizontal wing-shaped member behind the seats bears the third brake light. The design of the Lamborghini Reventón Roadster's long back is also quite distinct from that of the Coupé. The engine bonnet is virtually horizontal and a total of four windows made from glass provide a view of the mighty V12 in all its technical elegance.

The base bodyshell of the Lamborghini Reventón is already so stiff that the Roadster requires only minimal reinforcement. It has a dry weight of only 1690 Kg (3,725 lbs.), just 25 Kg, (55 lbs.) more than the Coupé.

Like the Coupé, the cell of the Roadster is made from high-strength steel profile and carbon components joined with specialist adhesive and rivets. The bodyshell is made almost entirely from carbon fiber elements, with sheet steel used only for the outer door skins.

A unique paint finish completes the razor sharp design language of the Lamborghini Reventón Roadster. For this exclusive special edition, designers have created a new shade of matt grey called Reventón Grey. As for the Reventón Coupé, which is a slightly different shade of grey, this is a matt paint finish that, in the sunlight, displays an unexpected impression of depth thanks to its special metal particles.

The wheels of the Lamborghini Reventón Roadster also incorporate the interplay of matt and glossy elements. The five spokes of the rims each bear a Y-form, and on each spoke are mounted small crescent-shaped wings made from matte carbon. These provide not only an unusual visual impact, but also a turbine effect that further improves cooling of the mighty ceramic brake discs.

The interior of the Lamborghini Reventón Roadster conveys the same powerful design as the exterior. The cockpit is structured with technical clarity, the interfaces arranged for functionality. Like a modern aircraft, the open two-seater no longer has classic analogue instrumentation - instead, information is delivered via two transreflective and one transmissive liquid-crystal displays.

The driver can switch between two modes at the touch of a button - one digital view with illuminated bars and one level with classic round dials, albeit with changing color graphics. Centrally located at the top of the display is the G-force meter. It represents the intensity of the forces acting on the Lamborghini Reventón Roadster under acceleration, braking and heavy cornering; the same format used in Formula 1.

The instruments are mounted in a casing machined from solid aluminum which is housed in a carbon fiber dashboard. The interior displays uncompromisingly clean craftsmanship and features a host of carbon fiber applications - e.g. on the center tunnel - aluminum, Alcantara and leather. The central panels and the seat cushions are perforated, with precision stitching gracing their outer edges.

Lamborghini has equipped the Lamborghini Reventón Roadster with full options. 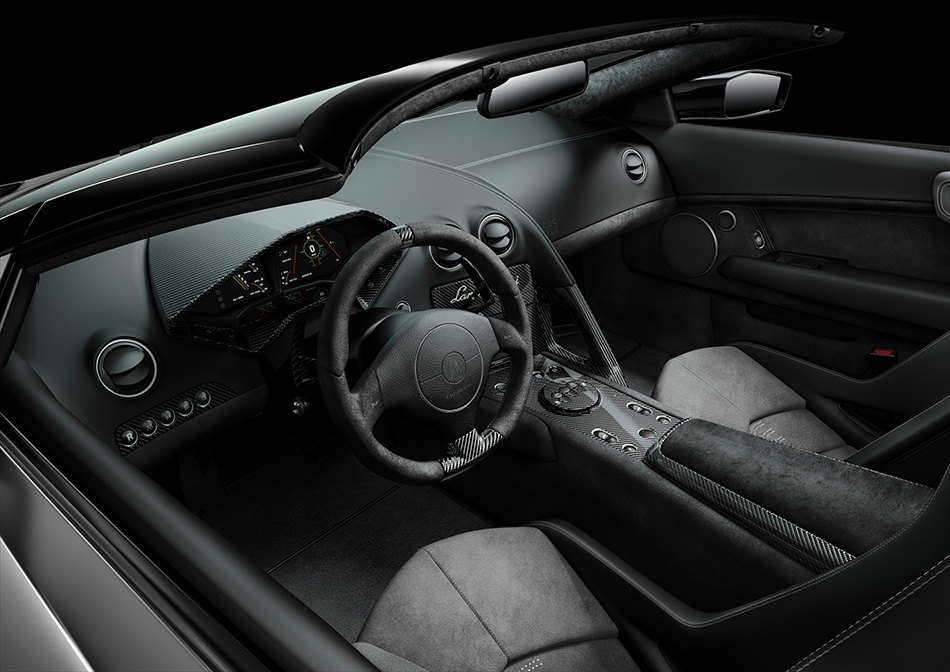 An icon of engine design

The V12 engine is a masterpiece of Italian engineering. Two chains drive its four camshafts that, in turn, operate the 48 valves. Together with the three-phase adjustable intake manifold, the variable valve timing delivers a meaty torque build-up. Dry sump lubrication ensures that the hi-tech power unit has a constant supply of oil, even under heavy lateral acceleration. The absence of the oil sump means a low mounting position - benefitting the car's outstanding handling characteristics.

The V12 catapults the Lamborghini Reventón Roadster from 0 to 100 Km/h (0 to 62 mph) in 3.4 seconds and onwards to a top speed of 330 Km/h (205 mph). It reacts with the eagerness of a racing engine to input from the right foot, revving to 8,000 rpm and beyond, and performing a symphony that sends shudders along the spine. The deep booming bass, the powerful mid-range and the exultant horn section play music that, once heard, can never be forgotten.

In classic Lamborghini style, the aluminum engine is mounted longitudinally in front of the rear axle, with the transmission ahead of it beneath the center tunnel. This layout results in 58 percent of the overall weight being borne by the rear wheels - ideal for a powerful sports car.

This layout accommodates the Viscous Traction permanent all-wheel drive. Under normal conditions, it sends the vast majority of the driving force to the rear wheels. Should they begin to spin, the central viscous coupling sends up to 35 percent of the power via an additional shaft to the front axle. Limited-slip differentials are located there and at the rear axle with 25 and 45 percent lock respectively.

Lamborghini introduced the all-wheel drive principle with the Diablo. The reason back then was just as clear as it is today - four driven wheels grip far better than two, and the more powerful the engine, the greater the impact of this fundamental law of physics.

Also standard on the Lamborghini Reventón Roadster is the e.gear automated six-speed sequential manual transmission. The driver controls the gear shift, which is activated hydraulically via two steering wheel paddles. In addition to the "Normal" mode, the system offers a "Corsa" and a "low adherence" mode. The driver just has to keep his foot to the floor - the rest is handled by e.gear.

The Lamborghini Reventón Roadster keeps the extreme power of its engine in check with a running gear layout derived directly from motorsport. Each wheel boasts double wishbone suspension, with one spring strut on each side of the front axle and two each at the rear. The front end of the car can be raised by 40 mm (about 1.6 in.) to protect the underside of the vehicle over potholes or on steep entrances into underground garages.

The open two-seater runs on 18-inch wheels. The front tires measure 245/35, while the rears are 335/30. Dedicated air channels in the bodyshell cool the four wheel brakes. Carbon-fiber ceramic discs are standard - they have an extremely lightweight construction, operate with virtually no fade, are corrosion-free and achieve the highest service life. Each disc has a diameter of 380 mm (~15 in.) and is gripped by six-piston calipers.

As fast as the open two-seater may be, its road manners are impeccable. Its performance limits are extremely high, yet effortless to control. And, on exiting a bend, all four wheels stick tenaciously to the asphalt. The permanent all-wheel drive dovetails the car firmly with the road, delivering decisive benefits in traction and stability.

A further distinctive characteristic of the Lamborghini Reventón Roadster is its calm directional stability even at extremely high speeds - a feature that also turns fast highway stretches into sheer joy. Alongside the bodyshell design and the smooth underbody, which culminates in a powerfully formed diffuser, the rear spoiler carries responsibility for downforce. It deploys from the rear edge at about 130 Km/h (80 mph) and adopts an even steeper angle as of about 220 Km/h (136 mph). The entire aerodynamic concept - around and through the car - is radically laid out for performance.

Lamborghini used state-of-the-art, highly networked processes to bring the Lamborghini Reventón Roadster to life. The design, CAD work and model making that took place in the Centro Stile, which opened in 2004, were accompanied continuously by specialists and test engineers from the Research & Development Department.

The Design Department is directly linked to the neighbouring Ufficio Tecnico, ensuring rapid implementation of ideas. Lamborghini's capabilities also include the independent development of the complete electronic platform. This incorporates all control units - including those for the V12 and the innovative cockpit displays.

All units of the Lamborghini Reventón Roadster are being built on the Sant'Agata Bolognese production line, with perfect craftsmanship and to the highest levels of quality.