Whatever the terrain, Tacoma is king of the hill. Rebuilt inside and out with an all-new powertrain and enhanced suspension tuning, America's best-selling mid-size pickup for ten years running is Lord of the Rigs for dirt stomping adventurers. With a legacy of off-road victories and over seven million units sold since 1964, Toyota revitalizes the midsize truck segment with the introduction of the all-new 2016 Tacoma.

"For the past 50 years adventure-seeking Americans have relied on Toyota trucks to take them places, on and off-road," said Bill Fay, group vice president & general manager, Toyota Division. "The all-new homegrown Tacoma is a tough truck designed, developed and built for lifestyles of the young and young-at-heart."

Built from the Ground Up

The new 2016 Tacoma was primarily developed by the Toyota engineering team at Toyota Technical Center in Ann Arbor, Mich. Starting with the frame, they added high strength steel to enhance rigidity and overall strength. Ultra-high strength steel was integrated into the body shell using a new hot stamping process that reduces weight.

To create a truck to meet the needs of active drivers on a variety of tamed and untamed surfaces, the suspension was fine-tuned to help deliver a smoother on-road ride, while making it even more capable off-road. 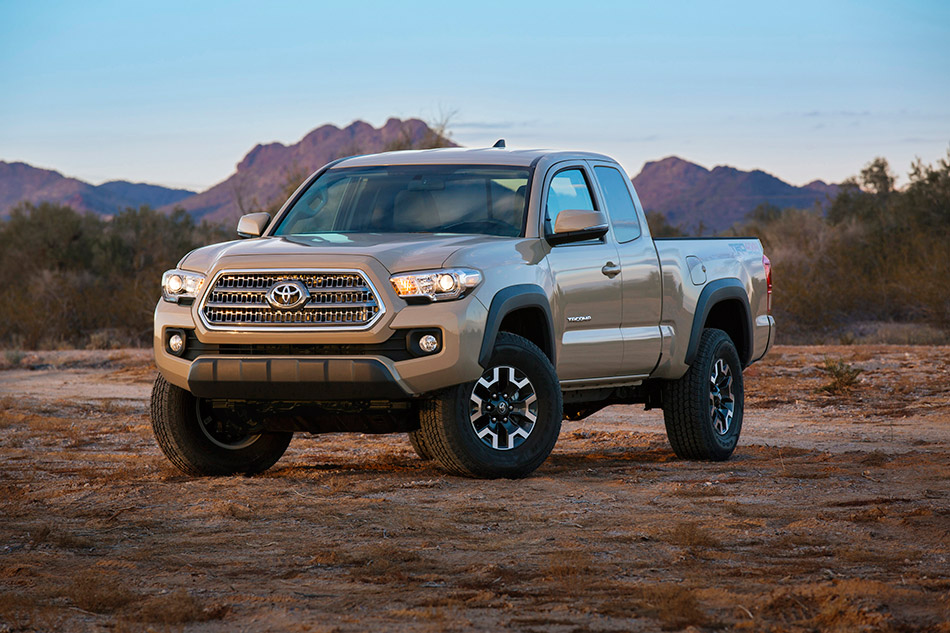 Get Your Motor Running

The new Tacoma will be powered by a 2.7-liter four-cylinder engine and an all-new, segment-first 3.5-liter Atkinson cycle V6 equipped with Toyota's D-4S technology, featuring both direct and port fuel injection.

Doing It With Style Inside and Out

Serious, yet fun! This is the Toyota truck design DNA. The Tacoma and Tundra are amazingly capable trucks that are designed to reflect their capability. The Tacoma shares big brother Tundra's more chiseled face, with a hex grille. From there, Tacoma expresses its own identity.

Inspired by desert racing, CALTY designers in Newport Beach, Calif. and Ann Arbor, Mich. made the new Tacoma all about recreational action and athletic agility. To achieve this, the new Tacoma's wheel flares are strong and muscular for greater wheel travel and the high-lift image reflects its purposeful capability. Four new wheel designs range from 16 to 18 inches.

From behind, the new locking tailgate emphasizes Tacoma's wide stance and tough image. The tailgate features an integrated spoiler for improved aerodynamics and a stamped Tacoma logo. The tailgate also adds an easy lowering feature, which allows it to slowly retract, preventing it from slamming down. For the first time ever, Tacoma is available with a tri-fold hard tonneau cover for securing gear when you're away from the truck.

Tacoma's tough exterior is complemented by an interior that conveys a sport truck image reflecting an athletic, go anywhere, off-road feel. Once inside, drivers will notice a "handlebar" design theme in the instrument panel for a more driver-focused experience. Soft-wrapped trim and metallic accents set the stage for a high-quality look and feel that is a starting point for an array of available premium features, including:

In addition to offering more premium features, Toyota engineers also made the new Tacoma quieter than ever. To accomplish this, all seals were enhanced and a multi-layer acoustic windshield and sound-absorbing headliner were added. Finally, a floor silencer pad further reduces road noise.

The new Tacoma will be available in five grades in both 4x2 and 4x4 configurations. Each grade will have its own personality and unique look. Tacoma grades include:

The two TRD grades are inspired by Toyota Racing Development's more than 35-year history in desert off-road racing and a heritage of vehicles that have helped off-road enthusiasts conquer the toughest terrains in the most remote locations around the globe. Tacoma buyers will now have the opportunity to capture their global adventures on video as every Tacoma will come standard with a GoPro® mount located near the rear-view mirror.

Traveling Off the Beaten Path

Tacoma off-roading adventures will reach new levels of fun in the TRD Off-Road grade thanks to the addition of incredible technology. A Multi-Terrain Select system allows the driver to choose between different types of terrain such as loose rock, or mud and sand. Each input regulates wheel spin by adjusting throttle and brake pressure to provide maximum traction on almost any terrain.

All Tacoma's will continue to come standard with the Star Safety System.

Tacoma is assembled at Toyota Motor Manufacturing, Texas (TMMTX) in San Antonio and Toyota Motor Manufacturing, Baja California (TMMBC) in Baja California, Mexico. Both facilities play a major role in carrying on Tacoma's legendary reputation for quality, durability and reliability (QDR), which has been instrumental in establishing its segment-leading owner loyalty rating. It's QDR has also helped establish Tacoma as the highest rated vehicle in its class for resale value according to Kelley Blue Book. The all-new Tacoma builds on this tradition with improvement in every aspect over the current Tacoma including, design, ruggedness, and performance improvements in horsepower and fuel efficiency.

Backed by 50 years of unwavering capability, an unbreakable attitude, and an off-road racing heritage, the all-new Tacoma is hungry for adventure and ready to tackle almost any challenge that it encounters. It is the ultimate tool for the outdoorsman that likes to get out there and go places.