The beginning of the collaboration between Zagato and Lamborghini dates back to 1965 when the Milanese brand conceived two exemplars of the Lamborghini 3500 GTZ on the mechanical basis of the 350 GT.

Zagato received a shortened chassis and dressed it with a light aluminum body with surfaces and volumes adopting the typical Zagato cut-tail: a solution which originated from the philosophy at that time for racing cars with a Zagato body and transferred with success to a more comfortable and well refined Gran Tourism car.

The 3500 GTZ was officially introduced at the 1965 London Motor show. Some weeks after, Zagato received a new order from Dani Gambirasi, cousin of Giuseppe Pesenti, at that time Head of Lancia.

The official collaboration with Automobili Lamborghini continued in the early 90s as Zagato became the very first Total Design Centre worldwide using CAD-CAM system. Thanks to this process, Zagato started a new project for a Zagato-bodied Lamborghini. This car, named Raptor, was designed and built in only four months and was introduced officially at the 1996 Geneva Motor show. 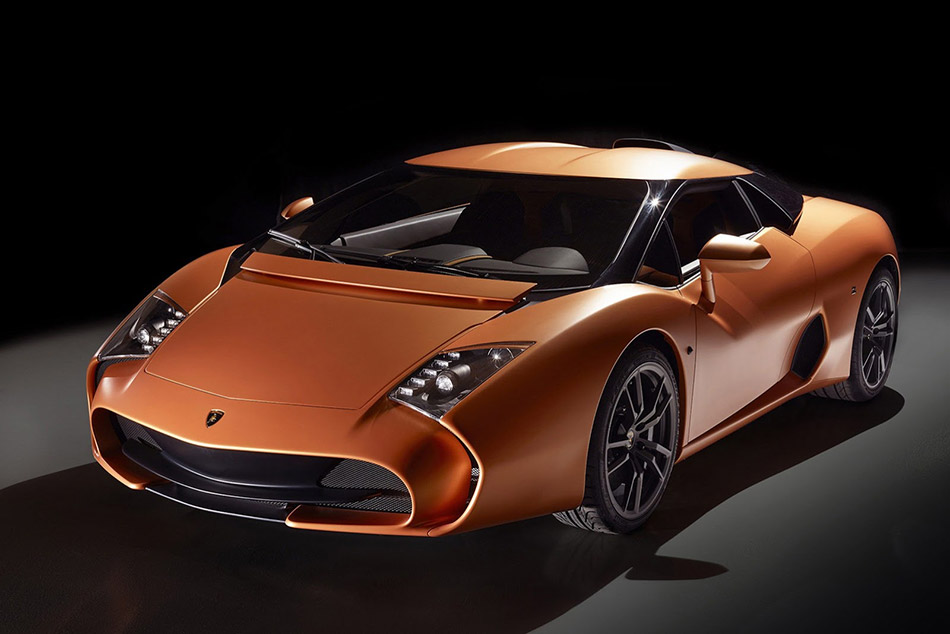 On this occasion, Andrea Zagato and Michael Kimberly, Lamborghini CEO, established a new agreement to develop the future model line of the Bull company.

Zagato developed first the L147 (or Super Diablo), which was conceived with a very aggressive design, featuring many aeronautic elements, typical of Zagato philosophy (the double bubble roof and the big air intake for the rear V12 engine radiators). Soon after the LM 003 Borneo, a take on the LM002, was presented-the first Zagato SUV.

The LAST Lamborghini Zagato, the 5-95, attends the 2014 Concorso d'Eleganza Villa d'Este (Concept Cars and Prototypes' class) as a traditional appointment for Zagato, but also as a fundamental statement during this year's celebration of the 95th anniversary of the Company's foundation.

Cernobbio, May 2014. This project is based on an official collaboration between Automobili Lamborghini and Zagato, with the purpose of creating a real contemporary collectible car.

In 1965 Marquis Gerino Gerini was the promoter of the first Zagato-bodied Lamborghini, the 3500 GTZ, a "fuoriserie" based on the 350 GT mechanics. Nearly 50 years later Albert Spiess, one of the most significant Lamborghini worldwide collectors, gave Zagato the chance to dress the most successful model of all time in the Bull's company history, in order to create a modern collectible car: the Lamborghini 5-95.

Albert Spiess boasts an unprecedented collection including several one-offs and Lamborghini first cars, as well as some Zagato collectibles - instant classics - like Alfa Romeo S.Z. (1990) and R.Z. (1993), Aston Martin V8 Zagato (1985) and V12 Zagato (2012). He commissioned to the Milanese Atelier a modern collectible car on the occasion of the celebration of 95 years of Zagato (1919 – 2014).

The Milanese Atelier transformed the model that revolutionized Lamborghini's history into a contemporary collectible. The Lamborghini 5-95 Zagato is based on the Gallardo LP570-4, the best seller in the first 50 years of Sant'Agata's company (1963-2013).

Zagato maintained all the technical constraints of the original project but has re-interpreted them according to its philosophy oriented towards functionalism and rationalism - typical values of the Milanese school.

The Zagato body expresses the typical key values of an "instant classic": fascinating, rare and a pure expression of the brands it stands for. The 5-95 was created with the only limitation of active and passive safety witch are the value of the donor car.

Andrea Zagato: "We have chosen the Gallardo because it is the most sensational project in Lamborghini's history. An extraordinary car, perfect in engineering terms, that has brought the image of 'the Bull' from a 'cottage industry' to a worldwide major industrial reality. The Gallardo production figures exceeded the whole Lamborghini production since its foundation."

Albert Spiess: "I always appreciated the ability of Zagato to create timeless lines with a forceful visual impact. I believe that a sensual design inspired by nature, together with the best technology, strike a perfect balance that is possible to achieve only in Italy. The 5-95 will be a fundamental piece of my collection."

Cernobbio, May 2014. Two "strong" themes define the design in its whole: the volume of the front fender that bites the bonnet - integrating the functions of the lights and the secondary air intakes - and the rear end starting from the center of the car that gives it a thrust.

On the front end a floating spoiler takes inspiration from the Lamborghini Raptor Zagato, coming to a firewall in carbon fiber that conceals the front air intakes.

Continuous glass surfaces – a technical and stylistic theme launched by Zagato in the end of the 40s on the Panoramic bodies and re-applied in the 80s – surround the pillar-less body and, similarly to aeronautical cockpits, reduce noise and improve aerodynamics.

The side intakes, following the Lamborghini Raptor, have been visually reduced to the minimum thanks to an air scoop on the roof as well as additional apertures concealed in the glass surfaces. The air scoop is functionally integrated with the double bubble roof, a signature of Zagato design, directing the cooling to the intake manifold.

The monolithic rear volume is chopped off by the typical truncated tail and reveals the brutality of mechanical components protruding from the area such as tail lamps heat release, aerodynamic features and the active spoiler.

There isn't a sole gram of fat in a Lamborghini. It is thin and athletic, having a lot in common with the surfaces of a Zagato body, true to the rule that a car is as much efficient as it is compact.

Zagato designers and engineers aimed to press the rear towards the engine and to increase the proportion of the front. As a result, the 5-95 Zagato's volumes express a sense of energy through fluid and organic surfaces that recall an animal's muscles as it is ready to leap forward.

The volumes intersect each other and suggest a jump, as if the central part of the front is ahead of the fender. To accentuate these proportions some solutions were introduced: in fact a new wind deflector was inserted at the base of the windscreen in order to increase the perceived length of the bonnet - this has a very precise aeronautical function because it improves the wind flow in the windscreen wiper area. In the same way, the rear volume has been slightly reduced introducing a "coda tronca" (truncated tail) to emphasize the perception of the leap.