Like the 2002 Ford GT40 concept, the Ford Shelby Cobra draws on Ford's emotional and performance roots in a thoroughly modern interpretation that reinforces the company's product-led momentum. With minimalist interior and exterior elements that emphasize its performance-oriented function, the Cobra Concept's design reinforces a performance mission, . Cues like the massive grille opening, side vents, low-back seats and bulging wheel arches establish an emotional connection with Carroll Shelby's original 1960s Cobras, but no dimensions or proportions are copied in this thoroughly modern two-seater.

As the saying goes, too much power is almost enough. So thought Carroll Shelby when he shoe-horned a 427-cubic-inch Ford V-8 under the hood of a small British roadster, giving birth to the legendary 427 Cobra. 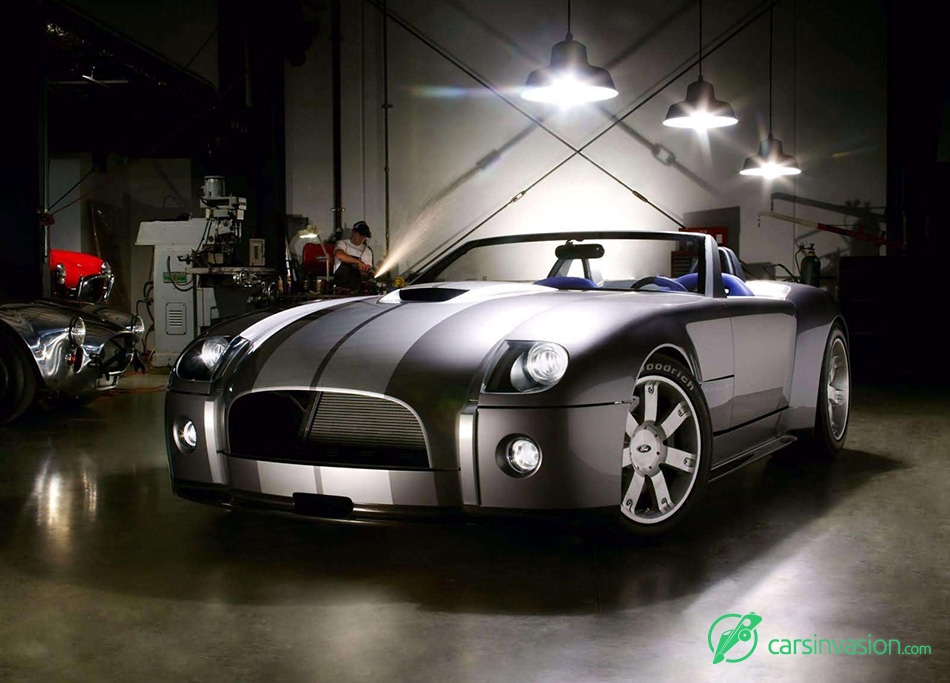 It weighs slightly more than 3,000 pounds and is about as long as a Mazda Miata. There's no roof, no side glass, not even a radio. 'That's the formula,' said Carroll Shelby. 'It's a massive motor in a tiny, lightweight car.'

This production-feasible roadster has a 427-inspired 605-horsepower, all-aluminum V-10 engine mounted at the front of an advanced aluminum chassis modified from the rear-engine Ford GT.

Inspired by the biggest, baddest Cobra of all - the renowned 427 - Ford engineers created a new aluminum-block V-10 to power the Ford Shelby Cobra concept. This 6.4-liter engine, adapted from Ford's MOD family, delivers the rush of raw power associated with that big 1960s V-8 monster - with 605 horsepower and 501 foot-pounds of torque - without the aid of supercharging or turbocharging.

The double-overhead-cam cylinder heads and cylinders are fed by port fuel injection and racing-derived velocity stacks that are just visible within the hood scoop. For a low hood line, the throttles are a slide-plate design and the lubrication system is the dry-sump type, which relocates oil from underneath the engine to a remote tank. The engine proudly wears brushed aluminum Powered By Ford valve covers.

The rear-mounted six-speed transaxle is identical to the high-performance unit in the Ford GT, with an integral limited-slip differential to drive the rear wheels. Based on the engine's 7,500-rpm redline and the drive ratios, this Ford Shelby Cobra concept has a theoretical top speed of more than 260 mph and would break 130 mph in third gear, although it's electronically limited to 100 mph - for now.

The bulk of the rear structure is made from slightly modified Ford GT components, including the massive, trellis-like cast aluminum suspension nodes, the rear rails and bumper beam, a major cross-member and the brackets used to mount the transmission. 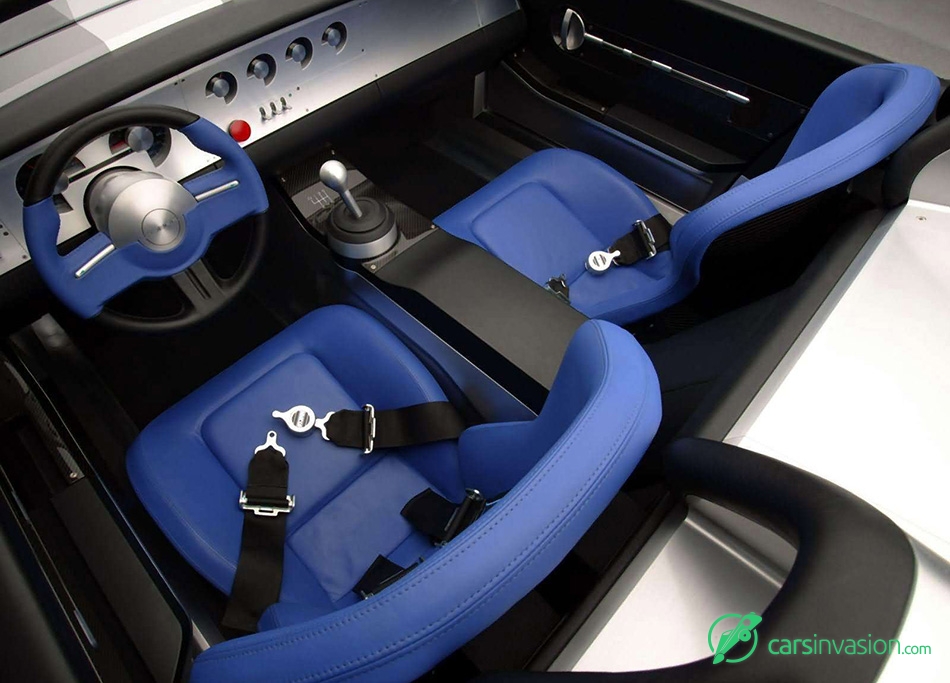 The center portion of the space frame also has a high degree of GT commonality - major aluminum extrusions are based heavily on existing pieces. At the front of the roadster, the team incorporated the extruded main rails, steering rack cross-member, crash-management sections and the bumper beam.

Overall, the Ford Shelby Cobra concept is more than 2 feet shorter than the GT, with a wheelbase nearly 7 inches shorter. Even the track width has been reduced by more than an inch. That the concept car and the GT share any parts at all is a testimony to the flexibility of the space frame design and the creativity of the chassis team.

Brembo monoblock aluminum brake calipers with four pistons each grab cross-drilled, vented discs at all four wheels. The discs are a massive 14 inches in front and 13.2 inches in the rear, for fade-free stopping power. But the team stopped short of fitting the car with an antilock braking system, in keeping with its racing character. Brake balance is biased slightly to the front wheels to aid stability.