Much of the development of the new IS-F took place at Fuji Speedway and the Higashi-Fuji Technical Center in Japan. The IS-F is based on the proven rear-wheel-drive Lexus IS, which is equipped with a double-wishbone front and multi-link rear suspension. As well as the IS performs, Lexus engineers demanded much more of the all-new IS-F. The result is a performance tuned 5.0-liter V8 engine, topped with specially engineered heads fed by a two-stage intake system, that produces 400-plus horsepower and more than 350 ft.-lbs. of torque. The all-new IS-F is equipped with engine-oil and transmission-fluid coolers for high-speed performance and a cylinder head-scavenging oil pump for high g-force driving.

The IS-F engine is mated to the world's first eight-speed direct sport-shift transmission. A new torque-converter lock-up control was developed that allows for a direct, crisp gear change through the constant lock-up of the torque converter in second through eighth gears. In Drive mode, the IS-F transmission performs with great smoothness, and the torque converter allows for great launch ability for fast standing-start acceleration that will register a zero-to-60 time in less than 4.9 seconds. 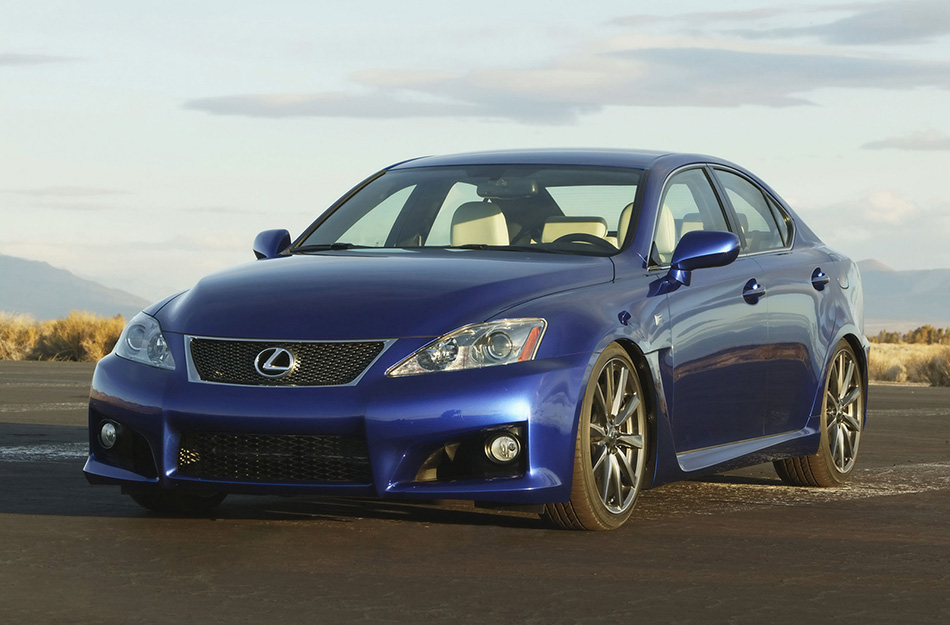 This unique transmission also features an advanced Manual mode. A pair of paddles located within a fingertip's reach behind the steering wheel enables the driver to make ultra-fast up-shift gear changes within a tenth of a second. Downshifts are accompanied by automated and incredibly precise throttle blips to match engine RPM to vehicle speed.

The impressive acceleration achieved by the IS-F requires it be equipped with heavy-duty Brembo brakes designed to the specifications of the Lexus engineering team. Huge, 14.2-inch cross-drilled front discs are gripped by rigid, powerful six-piston aluminum calipers, while 13.6-inch rear cross-drilled discs feature two-piston calipers. High-friction brake pads are equipped on all four wheels. The brakes are finished with the Lexus name displayed on the calipers, a first for a Lexus production vehicle.

The IS-F features custom-designed 19-inch forged alloy wheels as standard. The wheels were built to Lexus specifications by BBS and are surrounded by high-performance sport tires.

The IS-F features an all-new three-mode version of Lexus' Vehicle Dynamics Integrated Management (VDIM) system. In addition to the Normal mode, the new VDIM features a Sport mode that allows the driver to push the car even further before its braking-, throttle- and steering-control systems kick in. The third VDIM system mode is Off, which allows the driver to push the IS-F to its ultimate level of handling performance.

The attention to performance is complemented by modified styling cues that differentiate the IS-F from the standard IS. Lexus engineers provided the IS-F with a dual-exhaust system and quad-tail pipes, wider front fenders, and a larger grille and rear spoiler. Both the hood and lower intake were enlarged to accommodate and cool the V8 engine.

Like the exterior, the interior of the IS-F receives unique styling with aluminized composite trim and special surface treatments. The instrument panel includes an oil-temperature gauge and shift indicator-lights, while the "F" logo is showcased on the steering wheel and rear-center console.

In addition to the usual Lexus standards of comfort and convenience, the interior of the IS-F features specially shaped and trimmed seats, which hold the driver comfortably and securely in place. The special sport seats are available in black or a unique high-contrast white and black trim.

"The intent of creating the IS-F was not to be a competitor to other performance-sport sedans," said Carter. "Rather, the goal was to create a true performance sedan in a uniquely Lexus way-one that is totally authentic with a unique interpretation of raw driving thrill at all speeds and provides a whole new definition of 'usable power.'"

The IS-F will arrive at Lexus dealerships in early 2008.