The engineers and designers at Lexus continue to use their groundbreaking LF-A premium sports car concept as a medium for expressing their ideas about what a high-performance sporting vehicle not only can be, but should be. In this latest expression of the LF-A, they have removed the car's top to create a high-performance roadster.

The LF-A Roadster is based on the sturdy yet lightweight carbon-fiber and aluminum body used for the LF-A coupe, which helps maintain the structure's strength and rigidity even without a top.

Like its coupe counterpart, the LF-A Roadster is powered by a high-revving V10 engine that approaches 5.0 liters in displacement. The V10, capable of more than 500 horsepower and test-track speeds greater than 200 mph, is mounted in front of the passenger compartment but behind the front-axle centerline in what the LF-A's engineers refer to as a "front-mid" configuration. 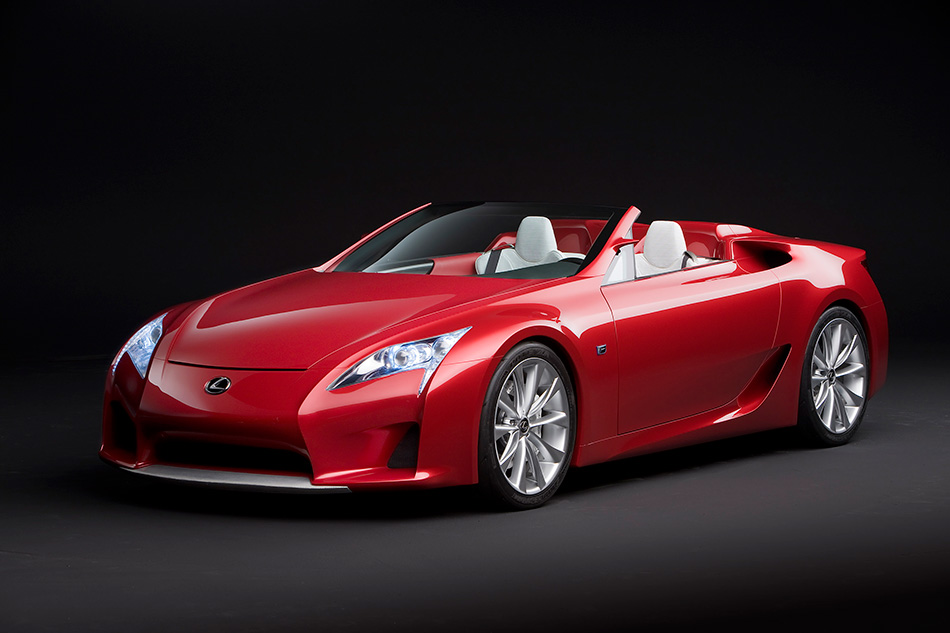 The engine is connected via a torque tube and propeller shaft to a transaxle that is controlled by paddle shifters. The torque tube is a structural member that adds rigidity to the drivetrain and chassis while also reducing vibration.

The rear is marked by a pair of wrap-around, arrowhead-shaped taillights that bracket a pair of large grilles. These grilles vent the heated air from the car's two rear-mounted radiators into the LF-A Roadster's aerodynamic wake. The radiators are fed cool air by two large intake ducts mounted just above the rear wheel wells. This aft radiator positioning not only allowed the designers to keep the car's front profile low and tight but also aided the LF-A's chassis engineers in their search for optimal weight distribution.

Helping to provide balance and scale to the design, which features an overall length of 175.6 inches and a wheelbase of 102.6 inches, are high-performance tires on turbine-styled alloy wheels. The front tires are 265/35R20s, while the rears are 305/30R20s. Like the LF-A coupe, the brakes consist of 14.2-inch cross-drilled, vented discs up front, and 13.6-inch cross-drilled, vented discs at the rear. The front brake calipers are six-piston units and the rear calipers use four pistons each.

An "F" logo, located on each front fender of the Roadster, indicates the vehicle's status as a part of the new "F" marque. The name is derived from the original "F" designation for the first Lexus LS prototype. That vehicle was internally coded "Circle-F," with the "F" standing for "flagship." The Circle-F designation further evolved into the code name Flagship One, or F1, and the first F1 concept developed into Lexus' first vehicle, the LS. Since then, the "F" code has come to signify a special vehicle program within Lexus that falls outside the normal engineering and development process. In addition, Fuji Speedway is the IS F's home circuit, and the shape of the F-logo was inspired by many of the track's turns. The all-new Lexus IS F sport sedan is the first production vehicle to carry the F marque.