Lincoln is pulling the wraps off a head-turning new concept car at the North American International Auto Show next week, signaling its design strategy for the next-generation of premium American vehicles and launching a new engine family.

The Lincoln MKR concept introduces a new design language of "elegant simplicity" on a four-door coupe that also features environmentally friendly amenities and fuel-saving technology, including its TwinForce™ engine. 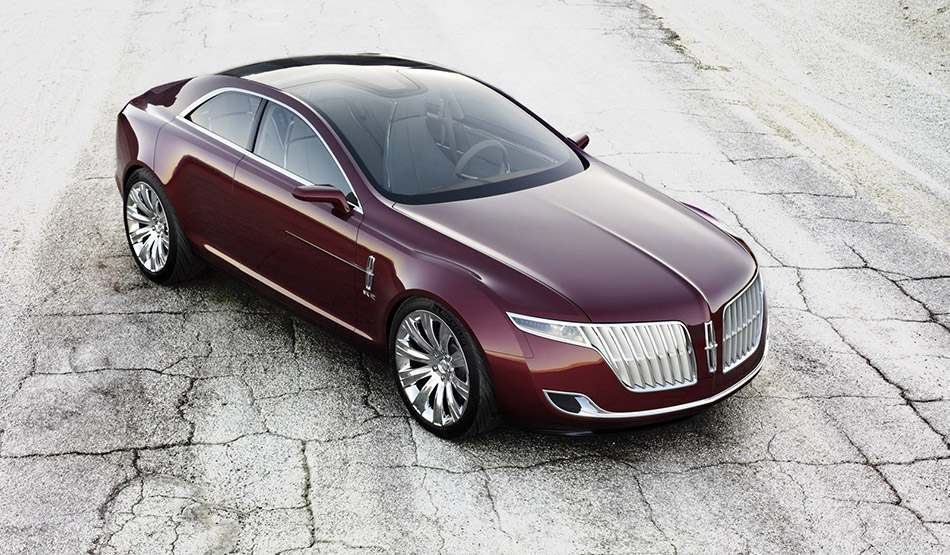 A New Era of Lincoln Design

The new design - created by a team led by Peter Horbury, executive director, Design, The Americas - showcases the visual elements that will influence a new generation of Lincoln products.

"We've reinterpreted the best of Lincoln designs over time, preserving the restraint and elegance synonymous with the brand," says Horbury. "The Lincoln MKR concept is sophisticated and modern, resembling an athlete - extremely strong and fit but looks elegant in a tuxedo.

"This romantic, sporting coupe should turn heads at the show. And, ultimately, this new design language will help lead us forward in the growing premium segment."

Three or four of these design elements are likely to appear on future production Lincolns, including the concept's most dramatic feature: the double-wing grille inspired by the 1941 Lincoln Continental Cabriolet. The split grille is designed to resemble the bow of a boat cutting through the water, giving the oversize Lincoln star a proper home on which to stand proud.

The Lincoln MKR concept's four doors and body side remain characteristically clean. A button concealed in the chrome door trim springs open the four 'winged' doors, slightly inclined for additional sophistication and a touch of drama.

From the rear, the coupe concept is instantly recognizable as a Lincoln, thanks to full-width LED taillamps stretching from side to side.

From above, this Lincoln proudly showcases its brand heritage with a large structural Lincoln star that punctuates the glass roof spanning the top of the car.

Inside, the Lincoln MKR concept defines a new direction for modern luxury, with ambient lighting and contrasting colors and materials that offer both a new look and philosophy for future Lincoln interiors.

"The concept's interior builds on the success of earlier Lincolns but stretches the boundaries even further," said Gordon Platto, chief designer of the Lincoln MKR concept. "This unique combination of materials gives the Lincoln MKR a rich interior but features the environmentally friendly amenities that luxury buyers expect in premium goods, including vehicles."

A black oak instrument panel engineered from recycled wood stretches from side to side and carries through to a twin-level floating center console that extends into the rear of the cabin.

This expansive 'T-shaped' panel houses the passenger information display system seamlessly disguised by the flush touch screen control surfaces and a navigation screen that can be concealed by a powered door.

"Lighting is an important design element," Platto said. "We know customers are paying more attention to the lighting in their homes than ever before, and we wanted to leverage it to create even more ambiance and drama inside the concept."

Ice Blue lighting is carried throughout the high-contrast interior, emitting from the door panels, mohair-carpeted foot wells, seats, center console and perhaps most dramatically from the large Lincoln star above which is easily viewed from each of the Lincoln MKR concept's four seats.

Each soy-foam based seat stands alone, looking as if suspended in air, wrapped in a creamy cashmere leather made through a more environmentally friendly chromium-free process. Seatbacks are finished with high-gloss, ceramic-looking shells.

Under the Lincoln MKR's sculpted hood is the exquisitely detailed TwinForce engine, finished in chrome and accented in the cranberry red metallic paint that dresses the rest of the modern exterior.

This marks the birth of the new TwinForce engine family that will power production versions of a range of future Ford and Lincoln products.

TwinForce uses direct injection technology and turbocharging. These technologies are common in diesel engines but have only recently been combined together in gasoline engines.

The Lincoln MKR's engine also is flex fuel capable, providing the driver with the flexibility to switch back and forth between gasoline and E-85 ethanol. Combining the high octane found in E-85 or premium gasoline with TwinForce technology allows the MKR's V-6 to deliver 415 horsepower and 400 pound-feet of torque - an impressive 118 horsepower per liter.

To achieve this type of performance from a V-8 would require an engine displacement of 6.0-liter or larger, nearly double the size of the 3.5-liter in the Lincoln MKR. As a result of the smaller V-6, the Lincoln MKR concept delivers 15 percent better fuel economy than a V-8 with similar performance.

The concept's engine is mated to a six-speed transmission, and the concept features independent rear suspension for more refined road manners.

The car sits on 21-inch chrome aluminum wheels fitted with unique Michelin tires that feature the Lincoln star in its treads.

"The Lincoln MKR concept is important because it marks a new era for the brand," Horbury said. "This is a showcase of modern design that marries power, performance and, essentially, 'guilt-free' luxury."