Already at the end of last year the Manhart MH1 400 had its world premiere at the Essen Motor Show 2013.  The new Manhart bolide is based on BMWs compact class top sports car M135i, whose dynamic gene was further highlighted by the refinement experts of Manhart Performance with the evolution to MH1 400.

Manhart Performance thus tailored a carbon exterior package to the bodywork of the MH1 400 containing a front spoiler blade, a rear diffusor with black stainless steel lattice and external mirror flaps. The external appearance of the MH1 400 is perfected by a smooth-blending BMW M-Performance rear spoiler and an exclusive full wrapping in "longitudinally polished aluminum in matt black". 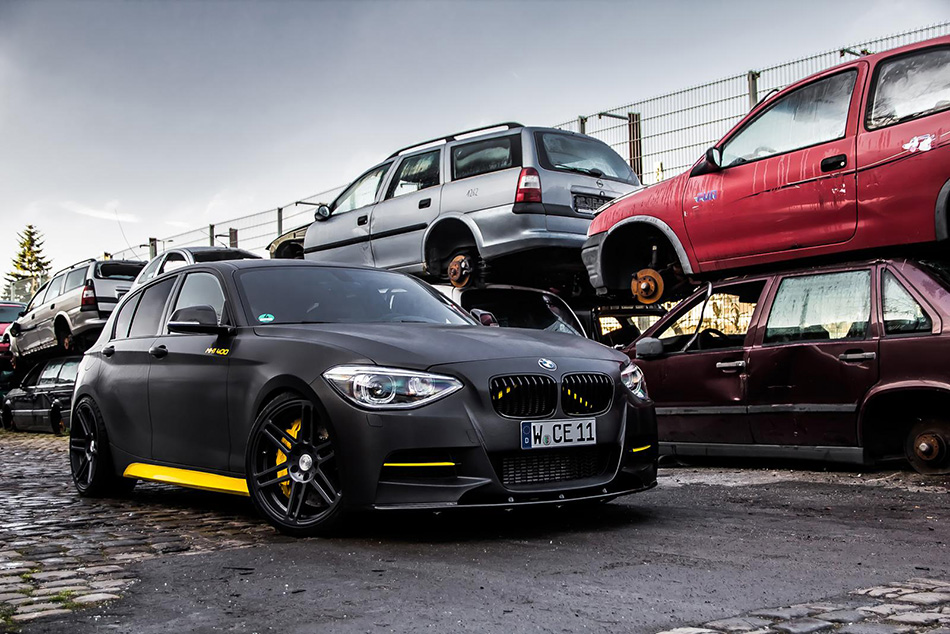 For the first time ever, the company's own "Concave One" rim design can be seen on the MH1 400 as cast wheel. It is used on the 1-series BMW in sizes 8.5x19 and 9.5x19 inches. The – nomen est omen – concave-shaped single part wheels were covered with Michelin Super Sport high performance tires of the dimensions 225/35R19 and 255/30R19, which stick virtually to the road surface. A KW Clubsport sport coilover kit that is capable of being configured in rebound and compression stage damping ensures that all wheels are constantly able to maintain optimal road surface contact.

Of course, the Manhart Performance engine technicians also lent the BMW N55B30 serial six cylinder engine with TwinPower turbo charging a helping hand (standard: 320 horse power / 450 Nm). First, there is a two-stage power portfolio: In "Stage 1", the MH1 is elevated to 390 horse power and a maximum torque of 530 Nm thanks to the application of an additional control unit. "Stage 2" that is additionally fitted with a new exhaust system (down-pipe with 280-cell catalytic converter and rear silencer with TÜV expert assessment) even breaks the 400 horse power sonic barrier: 413 horse power and 565 Nm are the decisive factors in this case!

To also adequately decelerate the MH1 400 in the face of the significant power upgrade, Manhart Performance fitted both axles with the company's own brake systems: While 380x32 millimeter disks hold the 8-piston fixed calipers firmly in their claws in the front, some 4-piston fixed calipers act on the rear brake disks, which – after all – still measure 356x32 millimeters. A 6-piston brake system is also obtainable for the front axle on demand.

In MH1 400, Manhart Performance paid particular attention to the interior refinement: A leather/alcantara full equipment with yellow contrast seam thus found its way into the passenger compartment, which in addition to the BMW Performance seats, also include the interior of the doors, the sports steering wheel and the speedometer housing, the center arm rest, the rear package tray and the headliner as well as the columns. There are also decorative stripes in carbon/aramid. The yellow shade of the interior also reflects on the exterior for instance in the form of the brake caliper, the tracks in the front air inlets or the inscriptions.