Hyundai introduced its all-new 2011 Hyundai Sonata at the 2009 Los Angeles Auto Show. This marked the North American debut of the latest version of the popular midsize sedan, introducing Hyundai's "Fluidic Sculpture" design language and an all four-cylinder engine lineup to the U.S. market.

Hyundai Sonata is the second vehicle in Hyundai's 24/7 version 2.0 product initiative (seven new models in the next 24 months) following on the heels of the all-new Tucson. Production of Hyundai Sonata will begin in December 2009 at Hyundai's U.S. plant in Alabama with retail sales beginning in January 2010.

Beginning with the 2011 Sonata and 2010 Tucson projects, Hyundai designers set to work about three and half years ago on Fluidic Sculpture. Fluidic Sculpture is a consistent, cohesive design language that will ripple through the entire Hyundai showroom. In developing the initial Hyundai Sonata sketches, Hyundai designers considered the interplay of natural, fluid elements with more rigid surfaces and structures to create the illusion of constant motion. Inspired by nature, Fluidic Sculpture injects sophistication and dynamic angles into the shape of a vehicle and now serves as the core of Hyundai's future design identity. 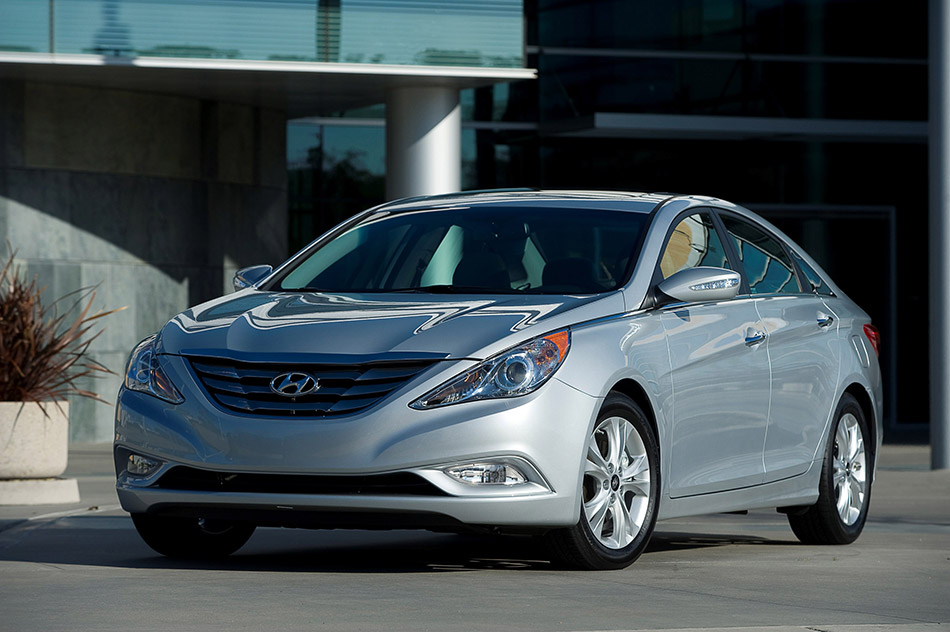 The exterior of the all-new Hyundai Sonata is long, light and low. The high beltline allows for a long, sleek roofline accented by the third window. A monoform side profile includes flowing lines highlighted by a Hyundai signature chrome accent that spans the length of the car. Normally, this type of trim is only found around the windows. On the new Hyundai Sonata, this trim extends out from the headlamps, juts up along the hood and through the beltline. The face is bold with a large powerful chrome grille and headlamps that integrate precise details. The stance is completed by 16-, 17- or 18-inch multi-spoke wheels.

The sophisticated look continues inside where Hyundai has created an upscale ambiance thanks to a flow-through center console and instrument panel. These flowing surfaces complement the exterior design and wrap around the driver and passengers.

The sleek design, combined with Hyundai's expertise in interior packaging, has produced an interior that delivers class-leading comfort, functionality and practicality. A sleek roofline typically compromises headroom and interior volume but, at 120.2 cubic feet, the Hyundai Sonata has the most interior volume of its key competitors. It is so spacious, Hyundai Sonata continues to be classified by the Environmental Protection Agency (EPA) as a Large car, truly a "class above" Camry, Altima, Fusion and Malibu (all are categorized as Midsize cars). Even in trunk room, the Hyundai Sonata shines. Sonata's 16.4 cu. ft. of trunk space gives it a 9.3 percent advantage over the Camry, and a 17.1 percent advantage over Accord.

The new Sonata will launch with Hyundai's new Theta II GDI 2.4-liter four-cylinder engine with a Gasoline Direct-Injection (GDI) fuel delivery system, which contributes to improved fuel efficiency and lower emissions. Hyundai Sonata is the first midsize sedan to adopt GDI technology as standard equipment in a naturally aspirated powertain. This shorter, more direct path of fuel delivery, allows for greater control of the fuel mixture at the optimum moment, thus improving efficiency. The fuel is injected by a camshaft-driven, high pressure pump that operates at pressures up to 2,175 psi. Direct injection also utilizes a higher than normal 11.3:1 compression ratio for increased power. The pistons are "dished" to increase combustion efficiency in the cylinder. This powerplant will deliver best-in-class fuel economy, best-in-class four-cylinder horsepower and best-in-class torque.

Next year, Hyundai will add a 2.0-liter Theta II turbocharged GDI four-cylinder engine and a 2.4-liter Hybrid Blue Drive model featuring Hyundai's breakthrough lithium polymer battery pack. Details about these powertrains will be announced at the 2010 New York Auto Show. Hyundai Sonata's innovative segment first powertrain lineup is a key driver of Hyundai's goal to be the most fuel-efficient automaker on the planet.

Hyundai's all-new six-speed automatic A6MF2 transaxle helps the company meet its goals of improving fuel efficiency and reducing emissions. Shifts are silky-smooth with an option of manual control through the SHIFTRONIC feature.

Drivers can access the SHIFTRONIC feature by moving the gear selector into a separate gate. Pushing the selector forward or pulling it rearward will shift the transmission up or down sequentially, adding to driver control. The SE trim will also feature steering wheel-mounted paddle shifters. A clear LCD readout on the instrument panel shows the gear being used.

Designed for transverse engine applications in passenger cars and SUVs, the new compact transmission puts Hyundai into an elite class of auto manufacturers who have designed their own proprietary six-speed automatic transmissions. The strength of the design is its unique layout which makes it smaller, more compact and lighter than any other six-speed transmission on the market today.

For the customer, the new six-speed delivers a performance edge. In this application, it helps brings a nine percent gain in fuel economy (35 mpg* versus 32 mpg). The gearbox has no dipstick because it is filled with automatic transmission fluid that is good for the life of the vehicle under normal usage conditions, thereby reducing maintenance costs.

Developed over a four-year period, this new six-speed automatic is 26.4 pounds lighter than the five-speed it replaces. It also is 1.6 inches shorter and considerably simpler, having 62 fewer parts, which is a key to increased durability, lighter weight and lower cost.

When it comes to transmissions, more gears are definitely better. The addition of a sixth gear enables closer spacing between gear ratios providing a better balance of performance and fuel economy while the wide overall gear ratio helps deliver strong acceleration.

Another example of engineering ingenuity is found in the design of the hydraulic pressure control unit. Slight manufacturing deviations from one solenoid valve to the next often times cause fluctuation in the hydraulic pressure and affect shift precision and quality. The transmission featured in the Hyundai Sonata cleverly integrates adjustment screws in the valves that enable each of the eight valves to be calibrated at the factory. This feature ensures stable hydraulic pressure at any shift point which facilitates a high degree of precision and control needed to deliver fast, smooth and precise shifts throughout the rpm range.

The Hyundai Sonata SE is an even more exciting and willing partner for drivers who prefer sportier ride and handling dynamics. The sport-tuned suspension features stiffer springs and larger stabilizer bars, resulting in a 20 percent increase in roll stiffness. Unique SE dampers, including monotube shocks in the rear are used to control the more aggressive suspension. Low profile 18-inch tires round out the unique chassis components of the Hyundai Sonata SE.

All Sonatas have column-mounted, motor-driven electric power steering that adjusts instantly to changing driving conditions while improving fuel economy over a conventional steering system. A quick-ratio steering rack is used for crisp feel on turn-in. Hyundai Sonata's turning diameter of 35.8 feet is better than Camry, Accord, Altima, Fusion and Malibu.

This focus on power-to-weight ratio pays dividends across the board. The Hyundai Sonata owes its ability to deliver both strong performance and excellent fuel economy in great part to its impressive power-to-weight efficiency.

Hyundai Sonata is built from the ground up with safety in mind, with a hot stamped ultra-high-strength steel body structure, advanced airbag technology and Electronic Stability Control (ESC), delivering on Hyundai's commitment to both active and passive safety technology leadership. The prior generation Hyundai Sonata was the first midsize sedan with standard ESC when it launched in March of 2005. ESC was not standard equipment on Honda Accord until the 2008 model year and the 2010 model year for Toyota Camry. Once again every 2011 Sonata has lifesaving ESC as standard equipment. This is important because the National Highway Traffic Safety Administration (NHTSA) has reported that ESC results in 35 percent fewer single-vehicle crashes and 30 percent fewer single-vehicle fatalities in passenger cars.

The Hyundai Sonata also features a state-of-the-art braking package. The package includes four-wheel disc brakes and an Anti-Lock Braking System (ABS) including Brake Assist, which provides maximum braking force when a panic stop is detected, and Electronic Brake-force Distribution (EBD) to automatically adjust the braking force to front and rear axles based on the vehicle loading conditions.

Dimension is a new branded audio system created by Hyundai Mobis and features a Variable Equalizer with normal, dynamic and concert settings. The last generation equalizer provided only one fixed sound field. The new Variable Equalizer, tuned by renowned audiophile Ken Pohlmann, is a function for controlling the sound qualities sensed by listeners. For example, Pohlmann added bass response to the concert mode typically not found in other systems.

Audio enthusiasts with even more demanding tastes will be impressed by the AM/FM/XM/CD/MP3 audio system with touch-screen navigation that includes a 400-watt external amplifier, dedicated Dual Voice Coil (DVC) subwoofer, eight-channels and nine Infinity speakers available on the Limited. Infinity and Hyundai engineers worked together during the early stages of development to integrate the speakers into Hyundai Sonata's interior. The team spent hundreds of hours fine-tuning the system for the cabin's unique acoustic attributes.

Touch-screen navigation is available on all trim levels and includes a high-resolution screen. This system provides new features including Bluetooth streaming audio capability. This easy-to-use unit can be controlled via 6.5-inch WVGA touchscreen or voice-activation by headliner-mounted microphone.

The system features 8GB of flash memory and comes matched with a sound system that plays compact discs, accesses digital music files via Bluetooth streaming audio or allows driver and passenger to access their personal listening devices through the iPod/USB/auxiliary inputs. Bluetooth audio wirelessly streams music from select mobile phones to the head unit. Also, with a Bluetooth-enabled phone one can look up a local restaurant and call for reservations before plotting the route. The XM Satellite Radio interface is also integrated into the navigation unit and features channel logos, real-time NavTraffic and XM Data services such as WX Satellite Weather®, XM Stock Ticker and XM Sports Ticker. The system is also updateable via the USB.