The Maybach Exelero is a very special concept car in that it was created in cooperation with tyre producer Fulda. For the testing of high-performance tyres, the company needed a car that was capable of exceeding the 350 km/h mark. A Maybach model had been built to serve as a test car for Fulda as early as the late 1930s – and this connection was revived a couple of years ago. The final result was more than convincing: on May 1, 2005, racing driver Klaus Ludwig drove the Maybach Exelero fitted with Fulda tyres in Nardo/Italy and attained a speed of 351.45 km/h – setting a new world speed record for limousines on series-production tyres.

The Maybach Exelero combines the elegance and first-class quality of a high-end limousine with the silky-smooth power of a sports coupé. It is a car which attains a top speed of over 350 km/h – with an unladen weight of 2.66 tons and the dimensions of a small van. For this car, a tyre was designed that not only coped with the above-mentioned weight, dimensions, and speed, but also gave the car safety, stability, and comfort. 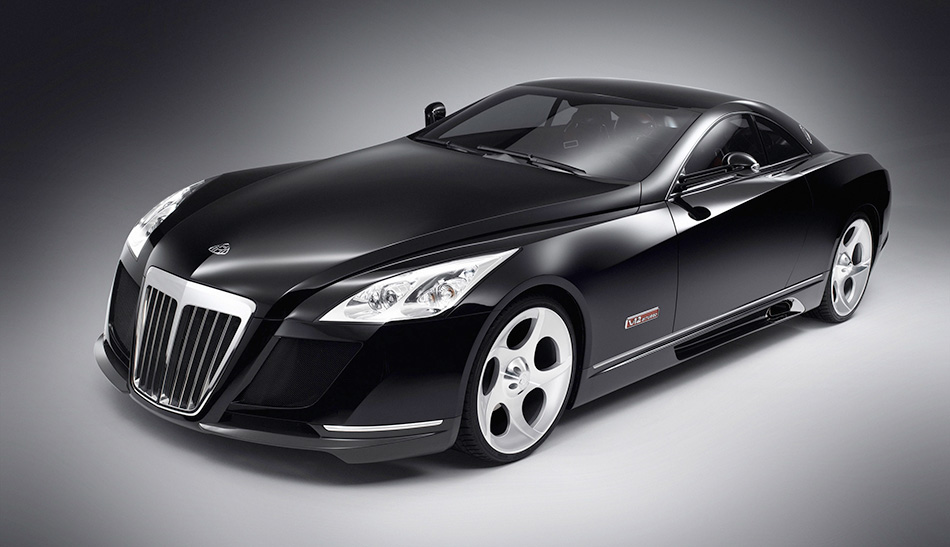 The project team started working on the Maybach Exelero in 2003. It consisted of Mercedes-Benz engineers, who assumed responsibility for the engineering, of designers headed by Prof. Harald Leschke as well as two professors and four students from the Transportation Design department of Pforzheim Technical College. Nine months later, the draft of one of the students was selected for realization from a line-up of promising design proposals. This student had succeeded in creating the most elegant symbiosis of the related form languages of past and present car generations. After the model-building stage, the car was set up by the renowned producer of vehicle studies, Stola, based in Turin/Italy. It was then that it was given its final name: Maybach Exelero. The denomination is an invented word formed from the Latin-Italian terms ex-cello/eccelso = sublime/illustrious/outstanding, and accelero = accelerated. The interior is dominated by materials such as natural leather, neoprene, coated perforated aluminium sheeting and high-sheen carbon-fibre surfaces in black and red. The car was completed in the spring of 2005 – a period of just 25 months had passed between idea and finish.

The Exelero was based on the Maybach 57. However, the twelve-cylinder engine used in the Maybach sedan was not powerful enough for the envisaged top speed, despite its two turbochargers. Therefore, displacement was enlarged from 5.6 to 5.9 litres, and turbocharging was optimised. As a result, a power output of just under 515 kW (700 hp) and torque of around 1,000 newton metres were measured on the test rig – enough power for the car to reach the targeted 350 km/h mark.

Fulda looks back on a long tradition of special cars for testing tyres and for introducing them to the public. The streamlined Maybach SW 38, designed in 1938 and supplied in 1939, was a response to technical developments in those days, i.e. to the cars' ever higher road speeds in the 1930s. Chassis and engine technologies, aerodynamically designed bodywork and the first motorways made high-speed driving possible. At the time, Fulda commissioned bodybuilder Dörr & Schreck in Frankfurt/Main with the manufacture of the test car – specifying a clear-cut condition: the car had to be capable of performing high-speed tests at over 200 km/h over longer periods of time. Dörr & Schreck accepted the challenge and chose Messrs. Maybach Motorenbau as cooperation partner for the project. With the support of Baron Reinhard Koenig-Fachsenfeld, an aerodynamicist renowned in professional circles, a streamlined three-seater based on the chassis of the Maybach SW 38 was created. The Fulda coupé with self-supporting bodywork and two-tone finish featured a long, downward-sloping rear end. Seen from above, the silhouette was a rectangle with rounded corners. Like the underfloor, the rear wheel arches were completely covered, and even the door handles were partly recessed.

To give the car a top speed of over 200 km/h, as demanded by Fulda, the engineers installed a powerful six-cylinder engine with 140 hp (103 kW). The top speed was equally made possible by an unusually low drag coefficient of cd = 0.25 (as opposed to 0.6 customary for contemporary series-production cars). Another pre-condition was that the chassis was not to weigh more than 1.6 tons. However, the car was used to a very limited extent due to the outbreak of the Second World War. It disappeared in the turmoil of war and has since been missing.