In the year of the 125th anniversary of the automobile Maybach is displaying the Edition 125! at the International Motor Show in Frankfurt. This unusual one-off piece presents exquisite new possibilities for individually styling the high-end saloons. The highlights include contour lighting and the laser-engraved light motif featuring the double-M in a curved triangle in the front armrest. The wide-ranging new individualisation options perfectly complement the confident air of the legendary Maybach saloons.

Maybach is constantly expanding its portfolio of high-quality equipment and appointments options. In the 125th anniversary year of the automobile the luxury brand is exhibiting a special one-off model, the Edition 125! at the International Motor Show in Frankfurt in honour of the ingenious designer Wilhelm Maybach. This high-end luxury saloon displays many familiar and new individualisation options which only Maybach customers can select. Highlights of the saloon painted in the newly created special colours Tahiti Black/ Patagonia Silver are lavish contour lighting and the laser-engraved light motif in the front armrest, which represents the alluring double-M in a curved triangle illuminated from inside. The other new features include a glove compartment lid embroidered with the signature of Wilhelm Maybach, silver-coloured topstitching, trim in silver carbon fibre/black piano lacquer, matt black 20-inch wheels with high-sheen spokes plus a newly styled radiator grille. 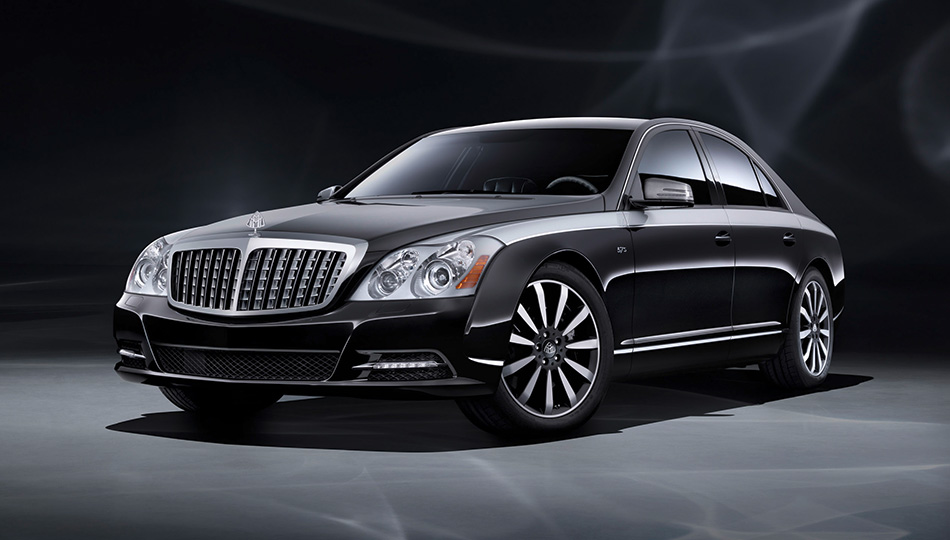 All the current Maybach saloons have a confident, superior appearance and are strikingly radiant. The exceptional status enjoyed by the high-end luxury saloons finds its main emphasis in the new dominant chrome radiator grille, which is meticulously produced in two different variants. In the Maybach 57 and 62 models it has 20 fine longitudinal bars, and in the Maybach 57 S and 62 S twelve solid double louvres and a "shadow strut" flag up the vehicle's tremendous power. Both arrow-shaped radiator grilles are also higher and boast significantly greater dimensions than before, and they have been assigned a more upright position.

The designers have elevated the modified bonnet and given it sharply defined contours. It has a contoured edge and appears distinctly arrow-shaped. A restyled, horizontally structured bumper trim gives the Maybach saloons an even broader look. Daytime driving lights featuring LED technology and bordered with a chrome insert have been integrated into the outer air intakes.

The new exterior mirrors with optimised aerodynamics for less driving noise harmonise with the striking front, whilst their large surface means improved vision. Dark red tail lights and chrome trim used on the handle in the boot lid lend the end section a powerful, distinguished look. This in turn is underlined by new high-sheen 21-spoke 19-inch wheels in titanium silver for the Maybach 57 and 62 models. The Maybach 57 S and 62 S models will in future be shod as standard with new 12-spoke 20-inch wheels in noble sterling silver. All models are available in the new Bahamas Blue paint.

The rear reclining seat which has only been available in the Maybach saloons with a long wheelbase up until now can, with immediate effect, also be installed on the front-passenger side in the rear of the Maybach 57 and 57 S models. At the same time Maybach has enhanced the craftsmanship of the seats for all models. The look of the seat upholstery layout has been refined and given additional piping. On request the piping can also be hand-braided or adorned with valuable SWAROVSKI® ELEMENTS. In the upper part of the seat backrest a redesigned badge in 925 sterling silver with "MAYBACH MANUFAKTUR" lettering is an impressive indication of the great love of detail and serves as a reminder of the prestigious environment in which one is travelling.

Maybach cuts an equally fine figure when it comes to the range of individualisation options available for the luxury saloons, which has been significantly extended. For the very first time there is an extremely high-quality flacon perfume atomiser available on request, having been developed exclusively by Maybach. Up until now it was reserved only for the special Maybach Zeppelin model, limited to just 100 units. As an option a large, high-resolution cinema screen with a 19-inch diagonal can now be fitted to the centre of the partition in the Maybach 62 models, as an alternative to the 9.5‑inch monitors in the rear available until now. If required Maybach will also fit the vehicles which have a partition – which, incidentally, can now also be personalised with motifs of the customer's choosing – with an overview camera, via which the rear passengers are able to keep an eye on the traffic in front of them without being seen themselves – even with an opaque partition window.

Thanks to an innovative WLAN router it is even possible to enjoy wireless internet access during the journey. This state-of-the-art connection uses the fast transmission standards HSDPA, UMTS and GSM/EDGE. A new mobile phone hands-free system with Bluetooth functionality is also available in the rear. And a newly developed DVD player in the rear now also reads extended DVD formats.

As one would expect, the Maybach Manufaktur showcases masterly handcraftsmanship with no compromises in the interior, where materials of the highest quality abound. There are three new interior appointments with different leather, carpet and headlining colours. New trim in selected dark brown bird's-eye maple, which can be combined with brilliant porcelain piano lacquer in the Maybach 57 S and 62 S, underline the regal ambience. As an alternative, customers can now choose from carbon-fibre trim elements with a sporty touch in various different colours, such as silver and red.