Furai is the sort of car that could only come from a company that incorporates the "Soul of a Sports Car" into everything it builds, but with an eye toward the future and the environment through the use of renewable fuels. Driving toward sustainability, Furai was initially tuned to operate on 100 percent ethanol fuel, the first time a racing three-rotor rotary engine has been fueled by ethanol. Research continues in earnest with partner BP into other renewable and future fuels, including ethanol gasoline blends like E10.

On any given weekend, there are more Mazdas and Mazda-powered cars road-raced in North America than any other brand of car. This is because every Mazda sedan, coupe and sports car really is developed with the highest possible dose of the company's trademark Zoom- Zoom - truly the Emotion of Motion. 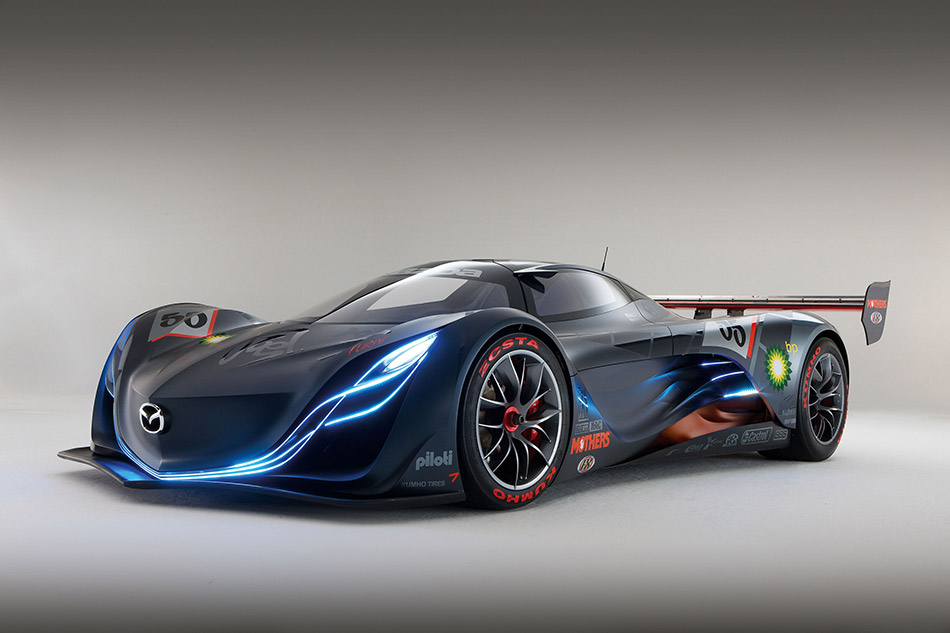 However, Zoom-Zoom is more than simply vehicle performance. The look and style that is Zoom-Zoom can best be seen in previous NAGARE-based efforts, including the Mazda Nagare concept that debuted at Los Angeles in 2006; Mazda Ryuga, which was first shown a year ago in Detroit; Mazda Hakaze, which appeared in Geneva last year; and Mazda Taiki, the star of the 2007 Tokyo Motor Show.

"Nagare" is how Mazda's future models will sustain the Zoom-Zoom spirit by exhibiting their strong affinity for motion.

Manufacturers commonly showcase design studies with little or no intention of actually using the theme presented. Mazda's approach is the opposite: All of the Nagare concepts, including Furai, help evolve this evocative surface language for future use. Every vehicle Mazda sells embodies the soul of a sports car to achieve a true Zoom-Zoom dynamic character. Nagare is how this celebration of motion will be portrayed on interior and exterior surfaces in future models. Instead of form following function, the two merge as one.

Franz von Holzhausen, Mazda North American Operations' (MNAO) Director of Design and the person who lead the team that created the Furai, explains the concept behind the concept, "We were looking for a way to bridge the gap between Mazda Motorsports and the production vehicles in our lineup. The mindsets of road-car and racing car fans are quite different, so the purpose of Furai is to find a meeting point for these disparate interests."

He continued, "Furai achieves this by purposely blurring boundaries that have traditionally distinguished the street from the track. Historically, there has been a gap between single-purpose racecars and street-legal models — commonly called supercars — that emulate the real racers on the road."

Track cars are, by their competitive nature, ill-suited for practical highway use, as well as generally far from road-legal. Some supercars visit the track on occasion, but they are primarily road cars not properly equipped for racing. The aim of Furai is to bridge this gap.

That said, Mazda neither intends to race Furai, nor is it a supercar the company plans to build and sell in the near future. Rather, Furai is a design study that lives between those extremes. Without the restrictions imposed by serial production models, and with the freedom of an autoshow environment, Mazda is using the opportunity to evolve the company's Nagare design theme one more step closer to reality.

Instead of mimicking racecar components and design elements in a road car - the strategy preferred by supercar manufacturers - the "Mazda way" was to begin this project with the real McCoy: a Courage C65 chassis that earned its stripes during two seasons of LMP-2 endurance racing in the American Le Mans Series (ALMS). This sports car was successfully campaigned under the MAZDASPEED Motorsports Development banner by B-K Motorsports during the 2005 and 2006 seasons. Drivers Jamie Bach, Guy Cosmo, Elliott Forbes-Robinson, and Raphael Matos piloted the car to one victory and a total of nine podium finishes in 15 ALMS events. B-K finished third in championship standings both years; Bach and Cosmo were co- Rookies of the Year in 2005.

"Anticipating future rules changes in the ALMS, we created a new closed cockpit which would be more appropriate for a future production model," said von Holzhausen. "The major element we did not change is the 450-horsepower RENESIS-based R20B three-rotor rotary engine that provides Furai ample Zoom-Zoom. The ultimate Mazda in our minds is rotary powered; as a company, we have no intention of abandoning that valuable asset. When people think of the very best sports cars in the world, the rotary powered Mazda RX-7 is always on that list."

The Furai concept serves as a turning point in the Nagare developmental process. While the four previous concept cars explored different ways to express Mazda's emerging design philosophy and to explore an aesthetic, this one is all about function - every last texture and detail serves some functional purpose. In essence, the Furai creative process boiled down to guiding air over and through the body in fruitful ways. To prove that this concept goes far beyond static aerodynamic analysis, Mazda's design, motorsports and R&D teams worked together to construct Furai as a 180-mph rolling laboratory to demonstrate its functional capabilities on demand.

While Furai strikes an incredibly strong presence, the real beauty of the project - and it's most valuable asset as a real-world test-bed - is in the details that von Holzhausen and his team incorporated:

The Mazda design and R&D teams worked closely with Swift Engineering to refine the aerodynamic characteristics, assuring that Furai remains glued to the ground at high speeds. Through its existing relationship with Swift Engineering, forged through development of the Mazda/Cosworth-powered Champ Car Atlantic chassis, the team used complex Computational Fluid Dynamics (CFD) software to tune various Nagare design elements to function at a high degree of efficiency. Drag, downforce, lift and overall esthetics were all key considerations.

Sourced straight from the race track, the Courage carbon-composite tub is essentially intact under the new Furai body, including the right-side driver's seat. Instead of the stark interior typical of race cars though, this cockpit is finished with more comfortable but still highly functional surfaces. An electronic display screen and shift paddles are built into the steering wheel.

In the chassis' original racing configuration, the passenger seat is filled with electronic gear, so those components were relocated elsewhere to provide adequate space for two occupants. The greenhouse is somewhat wider than the original cockpit to provide adequate head and shoulder room and suitable outward visibility. Doors attached with butterfly hinges provide a very efficient means of entering the cockpit. In this instance, the design team followed an approach that has proven very effective during years of endurance racing.

"One thing we learned from CFD studies is that we don't need much rear wing to balance the down force created by the front splitter and the Nagare features we've sculpted into the body" offered von Holzhausen. "Combustion air is provided by a variation of the Turbo Tongue device that Swift developed for Indy car use a decade ago. It rises slightly higher than the surrounding roof surface to ingest clean air above the boundary layer. Our final design works so well that we applied for a joint patent with Swift. Of course, it helps that it's a real piece of art, too, and one we had to incorporate into the design."

Irvine, Calif.-based Aria Group was responsible for creating new composite panels and they worked hand-in-hand with Mazda North American Operations' own in-house fabrication team to mate them to the Courage chassis. The dark matte finish with red and orange accents harkens back to the livery worn by Mazda's legendary 787B when it won the 24 Hours of Le Mans in 1991, making the company the first - and still only - Japanese company to ever win the endurance classic.

Furai not only probes future design possibilities, it also ventures ahead with alternative renewable fuels. Consistent with Mazda's recently announced "Sustainable Zoom-Zoom" initiatives, Furai's three-rotor powerplant has been tuned to run powerfully on ethanol (ethyl alcohol) and ethanol gasoline blends. There are exciting advances being made in renewable fuels, from current blends like E10 (10% ethanol and 90% gasoline) with research ongoing in making Ethanol from cellulostic materials, to future renewable gasoline components like Butanol, a higher order alcohol which is fungible with gasoline. The addition of these renewable components improves Mazda's understanding of how these fuels work with the company's technology. and reduces the consumption of fossil hydrocarbons and the emission of harmful greenhouse gasses.

John Doonan, Mazda's manager of motorsports team development, explains the thinking behind Furai's use of alternative renewable fuels: "One of our key technical partners in our motorsports activity — BP — helped facilitate our use of renewable fuels for this concept vehicle. Going forwards, we are working with BP to determine appropriate renewable fuels for the vehicle and potentially our team entry for the 2008 ALMS series. BP is a strong leader in the renewable fuels areas, recently announcing a $500M investment in the Energy Biosciences Institute, and we are proud to partner with them."

Doonan continued, "In 2007, ALMS required use of renewable fuels, so we're projecting ahead with this application to gain experience. BP has a very green focus in the marketplace, and it's Mazda's intention to sustain its Zoom-Zoom performance image on and off the racetrack. While Mazda's rotary has proven readily adaptable to various alternative fuels, including considerable work with hydrogen fuel, this is the first time it's been engineered for other renewable Ethanol blends."

Through the BP partnership, Furai has been specially tuned to operate on renewable fuels. BP engineers continue to work to optimize other fuels, including investigating new future renewable fuel components. This is Mazda's first experience with ethanol fuel in a three-rotor racing engine, and the results have been convincing that, once again, the Mazda rotary engine is unique in its ability to run well on multiple fuels.

Ethanol is derived from grains such as corn and wheat or soybeans. Corn, the predominant feedstock, is converted to ethanol in either a dry or wet milling process. Future advances for renewable gasoline components include utilizing a wide variety of cellulosic biomass feedstocks, including agricultural plant wastes (corn stover, cereal straws, sugarcane bagasse), plant wastes from industrial processes (sawdust, paper pulp) and energy crops grown specifically for fuel production, such as switchgrass.