For more than 20 years, the MX-5 Miata has offered sports car enthusiasts a pure, uncomplicated and fun-focused roadster at an attainable price. Sticking to that simple concept has made the MX-5 the most popular two-seat convertible sports car in the world with more than 900,000 units produced, qualifying it as a Guinness World Record holder. Making its global debut in 1989, the MX-5 has since received several facelifts, seen many limited and special edition versions, been named "Car of the Year" multiple times around the world and topped countless "Best Sports Car" lists. But its soul has always remained that of a pure sports car, dynamically engineered and tuned to produce driver happiness, whether on a short trip from point A to point B or on extensive S-curve searches. 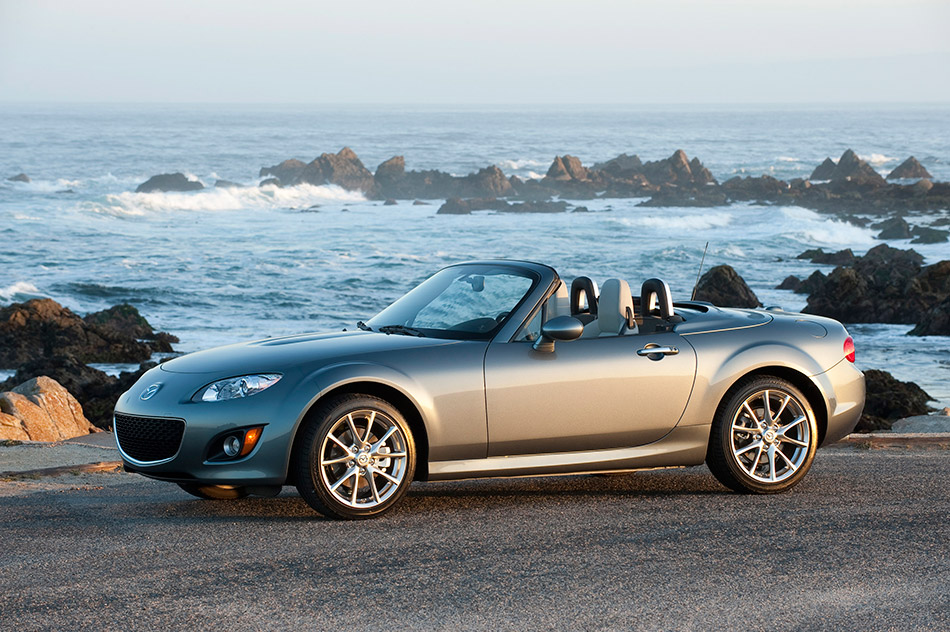 "As we head toward the next production milestone of one million units, Mazda is committed to further evolving the MX-5 Miata," said Seita Kanai, Mazda Motor Corporation (MC) senior managing executive officer, research and development. "We will refine its fun-to-drive character as well as further enhance its environmental and safety capabilities. In the years ahead, we will continue to cherish the MX-5 alongside its loyal fan base as the symbol of the Mazda brand."

This Zoom-Zoom driving experience evoked by the MX-5 is not lost on consumers and has always been within their reach with the roadster's affordable pricing. Substantially refreshed for 2009 and updated for 2010, MX-5 remains largely unchanged for the 2012 model year, continuing to stay true to the very essence of the "oneness of horse and rider" credo that has guided development of every generation of MX-5.

The heart of MX-5 remains a highly-responsive MZR-series 2.0-liter powerplant making 167 horsepower (158 horsepower for automatic transmission-equipped models). The sophisticated engine is light and compact, offering a strong performance, an inspiring exhaust note and, most important of all, tremendous responsiveness. Reacting to drive commands with lightning-quick reflexes and progressive power delivery are linear keys to MX-5's driving controls.

A classic sports car engine sound has always been a hallmark of the MX-5. The original 1.6-liter 1990 model was tuned to mimic the sound of dual-carbureted sports cars of the '60s. Key to a fuel-injected engine making that similar sound is careful tuning of intake resonance, and pointing the engine's air intake at the driver so that sound is delivered with maximum effect. While the first-generation MX-5 did just that, it drew in hot under-hood air from behind the radiator. Today's engine draws in cool air from the nose of the vehicle for better efficiency, but getting that classic induction sound to the driver now requires new technologies.

Since the third (and current) generation model was introduced for 2006, the lightweight plastic composite intake manifold itself has been designed to transmit certain frequencies that match the classic sports car sound profile while suppressing less ideal sounds. 2012 models with six-speed manual transmissions are equipped with an Induction Sound Enhancer (ISE). Made up of a series of tuned pipes and a passive resonance membrane, the ISE delivers the engine's natural induction sound to the cowl, just ahead of the windshield, so pleasing engine sounds can be delivered at a satisfying volume without resorting to simply being loud.

Standard equipment is a close-ratio five-speed manual transmission and an available six-speed manual gearbox, with gear ratios close-stacked to enhance the joy of driving. A Sport automatic transmission adds dimensions to the MX-5's personality. Six ratios are provided to improve acceleration, driving refinement and freeway comfort. Paddles mounted behind the steering wheel command upshifts while buttons positioned on the spokes are used for downshifts.

Coordinating engine torque with the shift sequence results in smooth, seamless and faster gear changes. The Sport AT-equipped car is a joy to drive, with gear ratios perfectly matched to the engine's horsepower and torque output.

A Style of Its Own

The MX-5's fun exterior design retains the iconic feel of the earlier generation models while simultaneously giving the vehicle a dynamic, modern style. The body is shaped to make the cockpit the widest portion of the car, deliver a roomier, safer design that still expresses the compact look of a lightweight sports car. Side surfaces are rounded, yet taut - like smooth skin over a toned, muscular body. Head and tail lamps are mounted inboard to reinforce the sense of compactness that is so central to the vehicle's design philosophy. Joining this modern shape are tail lamps and rearview mirror harkening back to the elliptical shape of the first-generation MX-5, a silhouette that could be mistaken for nothing else.

The front of the MX-5 features an aggressive face within a five-point grille and highly-sculpted triangular front fog lamp bezels. The design is functional as well. The bulge below the front fog lamps, the wide air deflectors ahead of the front tires, the side sills, the rounded lower corners of the rear bumper and even the taillights all contribute to a low coefficient of drag.

Virtually inventing the easy-to-operate soft top found on the original MX-5, the 2012 model continues to set the industry standard. Unlike competitor models, the soft top can be lowered or raised with one hand, from inside the vehicle, and requires no bulky or complicated snaps or external latches. The Z-fold design uses a simple, central latch handle that requires only a effortless wrist movement to stow.

Also industry-leading is the Power Retractable Hard Top (PRHT), which is available on Touring and Grand Touring models. The PRHT builds on the soft-top two-seater's zest for life by enhancing year-round comfort and security. Opening and closing cycles last only 12 seconds, making this the fastest power-operated retractable hard top in the U.S., and the only retractable hard top currently in the market that doesn't compromise trunk space. Like the soft top, the PRHT descends into the same storage well behind the seats, leaving the trunk area untouched.

The MX-5's interior design theme balances comfortable snugness below shoulder level with openness above to give the impression of riding in open air. The T-shaped instrument panel is consistent with Mazda's interior design DNA while the center console accentuates the backbone of the vehicle. Strong horizontal and vertical theme lines connote rigidity and sports car capability. The black center stack is as simple and functional as possible. The arched hood over the instrument cluster and four circular vents are part of the MX-5's cabin identity.

Wind in the hair is one thing, but no one enjoys cockpit turbulence and buffeting, especially on long drives. Small quarter windows block drafts between the windshield pillars and door mirrors into the cockpit. An aero board located between the seat back hoops in tall and perforated to slow down reverse-flow air that rushes into the cockpit.

Modeled for its Biggest Market

The MX-5 was conceived primarily for the U.S. and throughout the vehicle's history, North America has come through and remains the largest market for what has become the world's best-selling two-seat convertible.

The 2012 MX-5 is available in five exterior colors - Copper Red, Stormy Blue, Liquid Silver, Brilliant Black and True Red - and can be matched with either a black (cloth or leather) or dune beige (leather only) interior. Fuel economy is frugal at an EPA-rated 22 city/28 highway for Sport models (5MT) and 21 city/28 highway for Touring and Grand Touring models (all transmissions).

Race-Ready from the Showroom Floor

Too much weight is bad for athletes who must combine quick reaction times with equally strong bursts of energy at the drop of hat, and it's just the same for sports cars. Weight slows acceleration, lengthens braking distances, dulls handling and cripples fuel economy. Mazda engineers worked hard to make the MX-5 lightweight - all while building a roomier, safer car.

Weight-saving measurements include the use of an aluminum hood and trunk lid, aluminum foot control arms, aluminum rear uprights and rear calipers. The unibody makes widespread use of high-strength and ultra high-strength steel, boosting body strength while simultaneously cutting weight. The MZR 2.0-liter engine has an aluminum block and head, the exhaust manifold is crafted from lightweight tubular steel instead of cast iron, and the intake manifold and cam cover are made from lightweight composite plastic. With a curb weight that ranges from 2,447 lbs (Sport) to 2,619 lbs (Grand Touring with PRHT), the MX-5's nearly 50:50 weight distribution, combined with its track-proven suspension and responsive power, mean the rear-wheel-drive sports car is a lightweight only in terms of size, not road prowess.

When its strong body is coupled with standard safety features, the MX-5 is extremely light, roomy enough for larger adults and safe for the littlest passenger. All MX-5s are equipped with dual front airbags with a passenger deactivation switch, side impact airbags, side impact door beams, three-point safety belts with pretensioners and force limiters, anti-lock brakes (ABS) with Electronic Brakeforce Distribution (EBD), Dynamic Stability Control (DSC) with a Traction Control System (TCS) and a tire pressure monitoring system (TPMS).

Also, all Mazda vehicles come with the Mazda Certified Roadside Assistance Program. Using either the toll-free number or free Mazda Assist app for iOS- and Android-operated mobile devices, owners and their family members can contact roadside assistance 24 hours a day, 365 days a year throughout the United States and Canada. In addition, the New Vehicle Limited Warranty includes a comprehensive three-year/36,000-mile warranty, which covers every part of the vehicle except those subject to normal wear, a five-year/60,000-mile powertrain warranty and a five-year/unlimited-mileage corrosion warranty.