It was to be the perfect surprise: the 300 SL production sports car Mercedes-Benz presented at the International Motor Sports Show in New York on 6 Februar 1954 was a sensation. At its world première, the coupé with its characteristic gullwing doors made the hearts of experten and public skip a beat. Technical details such as its space frame and its extraordinary door design were without parangon among the sports cars of its day.

The bodywork with its flat, long bonnet and distinctive splash guards above the wheel arches, featured many elements of the W 194/11 prototype from 1953, for instance the typical powerdomes. And the family likeness extended to the area below the bonnet, too, for the W 198 I adopted the fuel direct injection of the prototype. In the 300 SL the 6-cylinder in-line engine had a nominal output of 215 bhp (158 kW) enabling a top speed of 260 km/h according to the relevant brochure. This value was calculated for an engine speed of 6500 rpm and a rear axle ratio of 1:3.25. In actual fact, though, the vehicle did not quite reach this value: on an official test drive carried out by the factory in August 1954 it reached a maximum speed of 247.5 km/h, averaged between outward and return legs, the best speed in one direction was 252 km/h. However: for a cultivated road-going sports car of the time these were outstanding values. 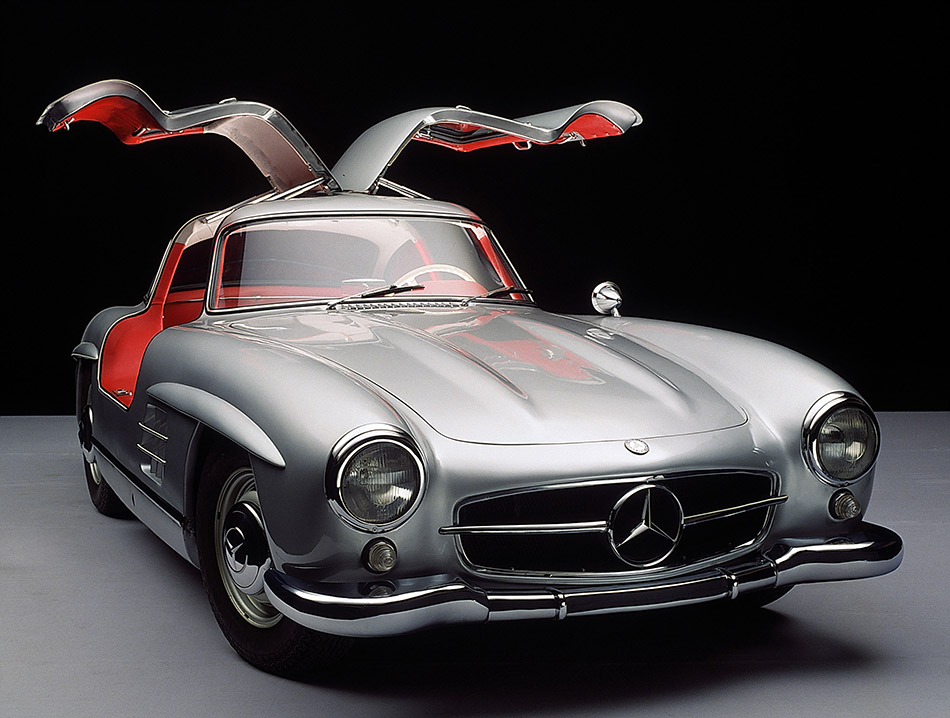 This exceptional driving performance was matched by an exceptional price, because in 1954 29,000 Marks was a fortune. The 190 SL Roadster, unveiled together with the 300 SL, cost 16,500 Marks, placing it in the upper price segment, too. For comparison: at that time a Mercedes-Benz 200 (W 180) luxury saloon with a six-cylinder in-line engine could be acquired for around 12,500 Marks. In the summer of 1954 production of the 300 SL started up. The production vehicle possessed a series of detail improvements, including a greater level of comfort, over the exhibition car.

It was only natural for the 300 SL to have its world première in New York, for it was Maximilian E. Hoffman – since January 1952 official importer for the Mercedes-Benz brand for the US market – who campaigned intensely for the construction of a production sports car. Apart from the series 180 and 300 Saloons, he was particularly interested in the 300 SL (W 194) racing sports car, whose great successes boosted the popularity of the Mercedes-Benz brand in the United States explosively. Hoffman saw assured sales prospects for a production version of the car. At the same time he broached the idea of a smaller SL roadster based on Type 180 – this was how the 190 SL came to be.

Daimler-Benz was fully taken up with design and development tasks, so that the Stuttgart-based company even cancelled its originally planned participation in sports car races in 1953. Because of this, Hoffman's demand for a 300 SL Sports Coupé was not exactly opportune, although it did have a certain attractiveness of its own, for a true sports car was still missing in Mercedes-Benz's portfolio. However, there were only a few months left before the New York Auto Show, which would be an excellent opportunity for the presentation of the new Mercedes-Benz passenger car programme. This lead the Board of Director to decide to turn the 300 SL racing car prototype developed for the 1953 season into a road-going version suitable for everyday use.

After the first tests, the press was beside itself. The German trade journal "auto, motor und sport" wrote: "Among the sports cars of our time, the Mercedes-Benz 300 SL is both the most refined and the most fascinating – a dream of a car." The British journal "AutoSport" enthused: "The Mercedes-Benz 300 SL is a car with a wonderful external appearance, coupled with virtually unbelievable performance. Its design and production quality border on perfection and the entire concept represents the uncompromising realisation of all the new ideas the car incorporates."

The hope of success in the United States market also became reality: the US journal Road & Track was equally full of praise: "When a comfortable interior combines with remarkably good handling, with almost terrifying road-holding, a light and at the same time precise steering and a performance that matches or even exceeds that of the best cars to date, then there's only one more thing to say: The sports car of the future has become reality."

The racing heritage of the 300 SL seduced renowned racing pilots and private drivers all over the world into entering the car in sports car races and rallies. In the 1955 Mille Miglia, the team of John Cooper Fitch and his co-pilot Kurt Gesell drove a production SL to superior victory in their category. Werner Engel won the European touring car championship in an SL in 1955, Walter Schock in 1956. The Liège–Rome–Liège marathon rally was won by Olivier Gendebien in 1955 and by Willy Mairesse in 1956. In the USA, Paul O'Shea clinched the American Sports Car Champion's title in Production Class D of the championship series organised by the Sports Car Club of America in 1955 and 1956.

A total of 30 series W 198 I vehicles with aluminium lightweight bodywork were made in 1955 and 1956. They bore their own specific vehicle identification numbers, except the first car of the series, which was given a steel sheet bodywork vehicle identification number. This aluminium version, 130 kilos lighter than the standard version, was not listed in the price lists but could be ordered just like a regular car. Customers with motor sport aspirations were among the main target groups for this lighter gullwing car.