Combining exclusivity with exceptional levels of dynamism, the Infiniti FX Vettel Edition is a production car with a unique position in the global automotive market: it was inspired by, and developed in conjunction with, the reigning Formula One World Champion.

The most powerful and expensive Infiniti ever made is the realisation of Sebastian Vettel's wish for an FX with even more focus and ability than standard, and endowed with a bespoke aerodynamic, aesthetic and technical nature that draws on Formula One practices. Crucially, the car had to achieve all this while keeping all driving elements in balance, preserving the sports car DNA at the heart of every FX.

"Vettel" badges show the world how satisfied Red Bull Racing's double World Champion is with the result, but they can only hint at his full involvement. In the journey from concept to production, Sebastian Vettel has been instrumental in the model's development and, as part of the test driving team, in providing the crucial feedback needed by the engineers to bring his sporting vision to life.

Sebastian Vettel continues to be central to the FX Vettel project by participating in the VIP hospitality for the 150 people around the world who will join him in this most exclusive of motoring clubs. 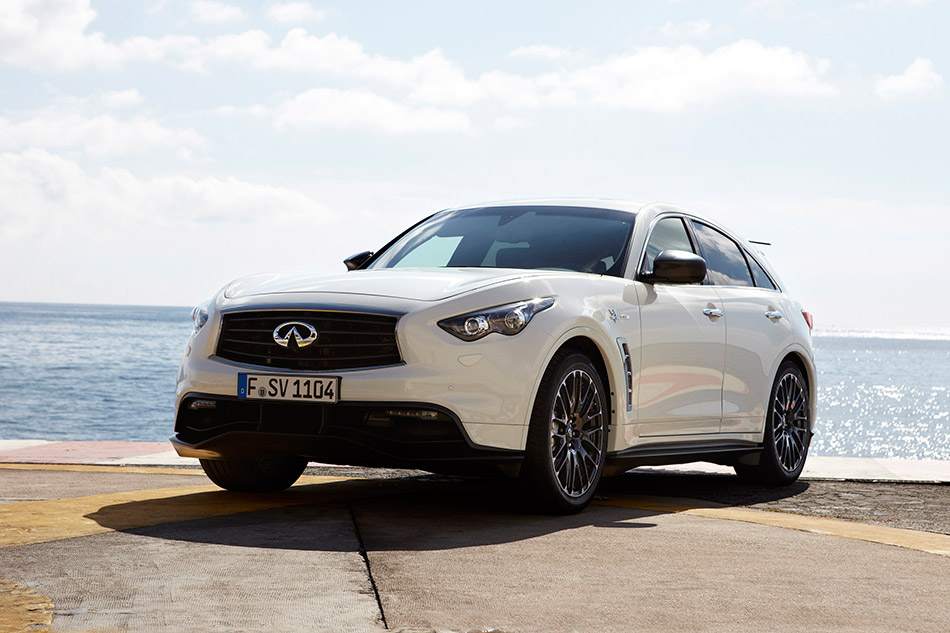 The money-can't-buy experiences may include VIP invitations to exclusive events, high performance driver training with star drivers, sessions in an F1 simulator, passenger rides in a three-seater F1 car, unique test drives and what promise to be memorable handover celebrations when the first cars are delivered, starting March 2013. Owners are able to track the production status of their cars on complimentary bespoke iPads - also useful for recording every highlight of their Infiniti FX Vettel Edition journey as the excitement unfolds.

Each Infiniti FX Vettel Edition is powered by a naturally-aspirated 420PS 5.0-litre V8 engine which offers balanced high performance throughout the speed range of up to 250 km/h (limited) and an acceleration time from zero to 100 km/h of 5.6 seconds.

Lighter and more aerodynamic, with more downforce at high speeds, the Infiniti FX Vettel Edition uses the same standard of carbon-fibre as the Infiniti-partnered Red Bull Racing Formula One cars, and an Alcantara®-trimmed cabin to Sebastian Vettel's design.

The Infiniti FX Vettel is available only in Moonlight White, and is priced from €120,000 (depending on country), with the carbon rear spoiler available at an extra cost.

Sitting at the summit of Infiniti's range, the strictly-limited production crossover represents the fulfilment of Sebastian Vettel's dream to turn his "company car" - an Infiniti FX50 S Premium - into an even more rewarding sports crossover with an extra emphasis on performance and handling, and with looks that take their cue from the world of Formula One.

Sebastian's idea came to life at the Geneva Motor Show in 2011 when in a classic motor industry "back of the envelope" moment he and Shiro Nakamura, Infiniti's Senior Vice President and Chief Creative Officer, sketched out the basis for what would become the Infiniti FX Vettel Edition.

Just six months later at the Frankfurt Motor Show of 2011 the FX Vettel concept had its world premiere to universal approval. It had been six months when Shiro Nakamura and Sebastian Vettel collaborated closely, defining the key changes that would mark the transformation from an already powerful and sporting SUV to a sports car SUV that could deliver everything the reigning Formula One World Champion wanted in a road car.

Infiniti is working with CRD (Car Research & Development, a member of the Brabus Group) in Germany to assemble the 150 Vettel Edition models. The first pre-production car made its dynamic debut, driven by Sebastian Vettel, at the Goodwood Festival of Speed in the UK in June. Since then Infiniti has made six more pilot models for testing and development work, prior to full production commencing in February 2013.

The first car is promised for the hands of the double World Champion; customer deliveries are due to begin in March 2013.

Exterior design merges the already dynamic form of the FX50 with elements of Sebastian Vettel's other company car, the Red Bull Racing RB8. F1-grade carbon-fibre replaces standard body sections to create the new look, one defined at the front by an entire new under-bumper section.

Inspired by the design of the RB8's front wing profile, the multi-layer spoiler saves weight, reduces drag and smoothes the airflow under the car, playing a key role in helping to balance downforce. Designed by Shiro Nakamura, the spoiler section presents perhaps the most cohesive example yet of how F1 design elements can enhance a production road car.

Carbon blades are fitted inside the Infiniti's signature double-arch grille, and carbon shells, profiled with the aerodynamic efficiency of a cycle racing helmet, are fitted over the mirrors. Carbon side skirts are installed, visually complementing the car's 20mm lower ride height, while the wheelarch mouldings are body colour instead of black. Uniquely in the European markets where it will be sold, the Vettel Edition is the only FX not to have roof rails.

Head-on, the Infiniti FX Vettel Edition presents a lower and even more purposeful stance, offering a new visual signature that is defined by a row of LED daytime running lights seamlessly incorporated in the new spoiler section. The lights include new LED foglights - the smallest ever homologated, and among the most powerful.

At the rear the (optional) roof wing is made of carbon-fibre and mounted on milled alloy supports, the wing's profile shaped for maximum aerodynamic efficiency. Ditto the rear diffuser, which defines the car's look from the rear with twin exhaust pipes flanking one of the Infiniti FX Vettel Edition's most evocative features: the rear foglight in the form of an F1 car's centre rain light. Attention to detail means it is clear-lensed and made up of 15 red LEDs, all exactly like an F1 car's light. Alas, regulations mean it is not allowed to flash…

All the body-shaping work has been inspired by the aerodynamics of the Red Bull Racing F1 car. With the carbon body additions including rear spoiler, the car boasts 30% more downforce than the standard car, as well as a reduction in drag of 5%.

The wheel design was chosen primarily for strength and light weight. Each of the forged alloy rims from BBS® weighs 3.5kg less than the standard car's wheels, making a significant positive impact on the car's unsprung weight - to the benefit of driving dynamics including steering behaviour and handling. Finely spoked and finished in black, the wheels are 21-inches, like the standard car's, and are shod with 265/45 tyres.

Each of the 150 models is distinguished by a trio of special Vettel badges, two on the flanks and one on the tailgate. Each badge comprises seven components which are put in place using a special template. The first was affixed at Tochigi in Japan in early October by Sebastian Vettel when he visited the FX production to see "his" car being made.

There is one Vettel badge on the inside: it is inlaid into a carbon-fibre panel on the centre console. Behind the cover is the glowing blue-rimmed push button that electrically opens the exhaust flaps - the vFX Vettel Edition driver's guarantee of V8 aural excitement.

Carbon covers the centre stack and is additionally used on the door trims and above the glovebox. The technical feel is enhanced by Alcantara® replacing the leather on the centre sections of the seats. The front seats, with 14-way electric adjustment (including adjustable thigh and backrest bolsters) offer the ideal cornering support such a car needs. Alcantara® is also used on the A and B pillars and the rooflining. The steering wheel and gear selector are swathed in leather. Purple stitching is used throughout - a uniquely Infiniti touch.

The enhancements are not at the expense of the FX's trademark luxury or standard features. With plenty of legroom for up to five people and a 410-litre boot, the FX Vettel Edition can double up as a limousine or load carrier when required - part of the reason Sebastian Vettel gives for the FX fitting his lifestyle so well. A power tailgate, with programmable height, is one of a number of recent additional features on all FX models. 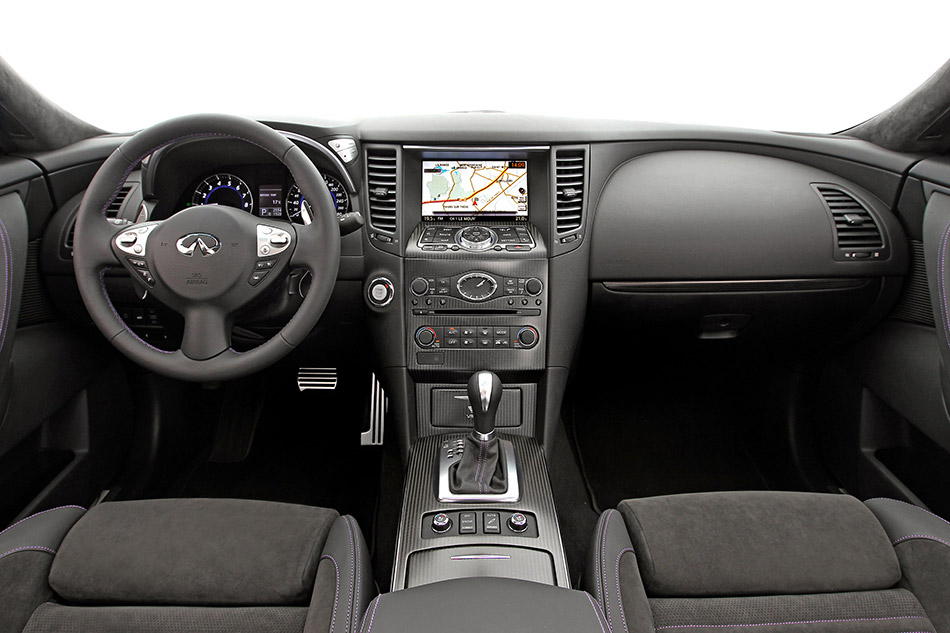 The muscular 5.0-litre V8, featuring VVEL (variable valve lift and timing) - Infiniti's guarantee of power with maximum efficiency - develops 390PS in standard form, delivered to Infiniti's intelligent torque-sensing all-wheel drive system via a 7-speed adaptive shift automatic transmission with solid magnesium gearshift paddles. For the FX Vettel Edition, power is increased to 420PS thanks to changes that include a new exhaust system. Torque also benefits: up to 520Nm from an already impressive 500Nm.

The exhaust pipe with optimized flow features an exhaust flap system, operated from a button on the dashboard that boosts power and efficiency at the same time as enriching the drive with the highest calibre of V8 burble. The extra aural stimulation is noticed only when the engine is under load - or when in manual mode and the transmission blips the throttle for downchanges - and for normal cruising the car retains all the refinement of the standard model.

The new body profile and lowered stance bring aerodynamic improvements that work with suspension changes to endow an already agile and responsive car with a new higher level of ability at all speeds. Where grip, precision, balance and traction are concerned, the Infiniti FX Vettel Edition could be a sports car.

Sport springs and 20mm taken out of the ride height are the keys to unlocking the extra ability in the FM (front-midship) chassis with its near perfect weight distribution, low centre of gravity and features that include Continuous Damping Control (CDC) shock absorbers and, for agility with supreme high-speed stability, Rear Active Steering (RAS).

Proving the excellence of the FX50 in standard form, little else had to be changed to suit the more dynamic character of the FX Vettel Edition. In the braking department, ventilated discs and 4-piston opposed front/2-piston opposed rear callipers offer exceptional stopping power. In Vettel Edition form, the five-star EuroNCAP FX is naturally fitted with the whole suite of Infiniti's advanced electronic safety systems.

Infiniti FX Vettel production is limited to 150 editions worldwide. Fifty cars are for Western Europe, 50 for Russia and 50 for the Middle East. Production is due to start on 1 February 2013 in a new assembly hall, currently under construction, in Bottrop, Germany. All the cars will be complete by mid June.

Each Infiniti FX Vettel Edition requires 320 man-hours to build by a team of 25 craftsmen, with all the work done by hand - with help from the occasional laser. That is used to perforate the Alcantara® so that the front seats' cooling function remains; only lasers provided the necessary accuracy. Further illustrating the exceptional attention to detail, special thread that is an exact match for Infiniti purple had to be imported from Japan for use in the car's distinctive stitching in the retrimmed cabin.

The Infiniti FX Vettel Edition body is transformed by 13 pieces of light but extremely strong carbon-fibre, the same grade and the result of the same "Prepreg"-carbonprocess as that used by the Red Bull Racing F1 team. Each piece is hand-crafted and finished with 12 coats before assembly.

The Infiniti FX Vettel Edition has been extensively tested in Japan and Germany. Infiniti engineers and the CRD development team have racked up 13,000 miles in each pre-production model, mostly on autobahns, including drives on test tracks like in Papenburg with its re-creation of many of the Hockenheim F1 circuit's corners. Each of the 150 cars will be subject to a intense final test drive before being approved for delivery.

VIP drive events continue to play an important role in the FX Vettel Edition program, consistent with Infiniti's ethos of hospitality. The most recent was at Le Castellet circuit in France where Sebastian Vettel demonstrated the car for an invited audience that included many of the people who have already put their names down to buy it. Many more such events are planned, all part of a money-can't-buy experience that ownership of the Infiniti FX Vettel Edition unlocks.