In September 1979, Daimler-Benz presented a new S-Class generation at the IAA in Frankfurt. The range of models available in the W 126 series was comprised initially of seven vehicles: Choice was from four engines (from the 2.8-liter six-cylinder carburettor unit with 115 kW/156 hp to the 5.0-liter V8 light-alloy engine with direct fuel injection and 176 kW/240 hp) and two body variants – in addition to the normal version, a lengthened variant, as had traditionally been the case with premium-segment saloons for generations. In this case, lengthening of the wheelbase by 140 millimetres was more apparent than otherwise and as usual the extra space served exclusively to increase legroom in the rear and the entry width for the rear doors.

In addition to improving ride comfort and safety, development of the new model series focused on decreasing energy consumption. The use of weight-reducing materials and an aerodynamic body optimized in the wind tunnel (cd= 0.36, compared with cd= 0.41 in the W 116 series) helped the new S-Class achieve a ten-percent reduction in fuel over its predecessor models. The two eight-cylinder engines of the predecessor series were replaced with two redesigned units with larger displacement and light-alloy crankcase. The 5.0-liter engine, which replaced the 4.5-liter cast iron unit, was already familiar as the power unit from the 450 SLC 5.0, while the 3.8-liter light-alloy engine was developed based on the long-serving 3.5-liter V8 with cast iron block. With both higher output and reduced weight, the new V8 engines could now achieve improved performance while at the same time using less fuel. The carburettor and injection versions of the 2.8-liter six-cylinder remained in the range unchanged. 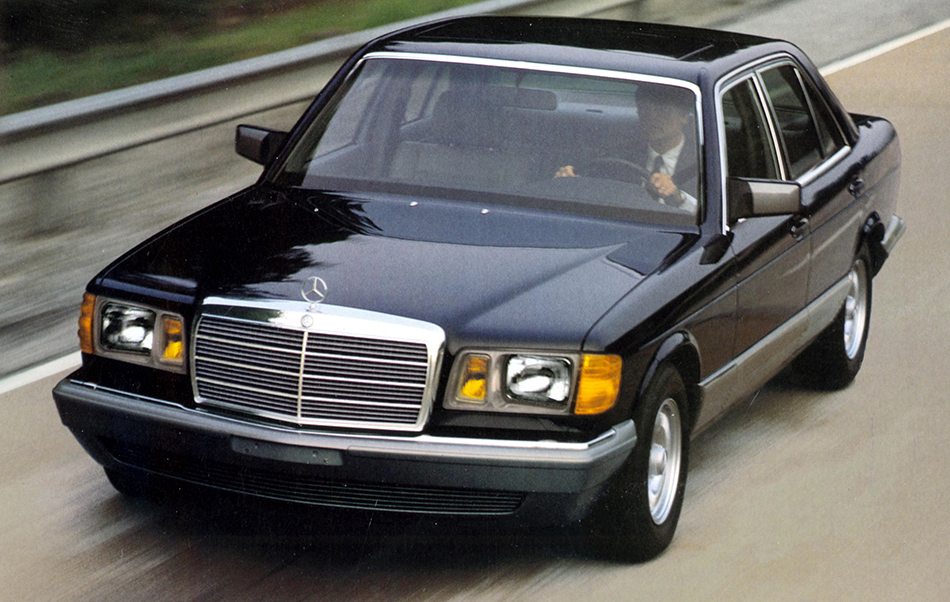 The W 126 series also saw development of a diesel version for export to the USA. Like its predecessors, the 300 SD Turbodiesel offered a turbocharged 3.0-liter five-cylinder engine, though with output now increased by ten hp (7.4 kW) to 125 hp (92 kW).

Chassis design was essentially the same as for predecessor models. The new S-Class saloons also featured a diagonal swing-axle at the rear and double-wishbone front suspension with zero-offset steering. The 5.0-litre models were again fitted with the coupled-link axle.

The body design incorporated state-of-the-art findings in safety research. Thanks to its new design principles the passenger compartment was now able to withstand the so-called "offset crash" unscathed at a speed of 55 km/h. The W 126-series saloons were the first production cars worldwide to meet the criteria of the frontal offset crash.

Many of the characteristic design elements of the S-Class are to be found beneath the waistline. For the first time, a Mercedes-Benz passenger car had no bumper bars in the classical sense, having instead generously proportioned plastic-coated bumpers that were seamlessly integrated into the car's front and rear aprons. Broad lateral protective strips made of plastic created a visual link between front and rear aprons, positioned at bumper height between the wheel arches.

A coupe joins the range

At the IAA in Frankfurt of fall 1981, two years after the debut of the W 126 series, an elegant coupe was added to the family, available only with eight-cylinder engines. Both V8 units underwent comprehensive revision as part of the recently initiated "Mercedes-Benz Energy Concept", a program geared to reducing fuel consumption and harmful emissions. In addition to an increase in compression, the list of improvements included camshafts with modified valve timing, air-bathed injection valves and electronic idle speed control. Camshafts with modified valve timing enabled maximum torque to be achieved at a lower engine speed and in the case of the 3.8-liter engine torque was even increased. This unit was subjected to particularly thorough revision: In order to achieve a more favourable volume-to-surface ratio, the bore was reduced and the stroke increased. The modified 3.8-liter V8 thus benefited from a slightly larger displacement. But by way of compensation for their significantly better fuel economy, the two eight-cylinder units were obliged to accept a minor drop in output. In both cases, rear axle ratios were tuned to meet the modified characteristics of the engines and were significantly longer. And the two six-cylinder units also saw a whole series of minor modifications that likewise led to fuel economies, even if these were less dramatic. These measures did not affect power output.

Four years after the launch of the Energy Concept the company carried out a comprehensive model refinement package, so that in September 1985, once again at the IAA in Frankfurt, it was able to introduce a completely revised S-Class line-up. Visual aspects were subjected to moderate revision; first and foremost this affected the bumpers and protective side moulding, but also the wheels, which were changed from 14 to 15 inches. This also brought with it a safety element, since it allowed larger brake discs to be fitted. Top priority, however, was give to the restructuring of the engine range.

Two newly-designed six-cylinder units, which had been premiered nine months earlier in the mid-range W 124 series, now replaced the trusty 2.8-liter M 110 engine. In the place of the carburettor version came a 2.6-liter direct injection unit, while the parallel-developed 3.0-liter unit became successor to the injection variant of the M 110. A new addition to the range was the 4.2-liter V8 engine, developed by increasing the bore of the 3.8-liter unit and now fitted to the S-Class saloon, the SEC coupe and the SL. The 5.0-liter engine was also modified. Now equipped with an electronic ignition system and the electro-mechanically controlled Bosch "KE Jetronic" injection system, it generated an output of 180 kW (245 hp).

The most spectacular innovation in the engine range was a 5.6-liter eight-cylinder unit, which was developed by lengthening the stroke of the 5.0-liter V8 and which unleashed an output of 200 kW (272 hp). If required, an even more highly compressed version was also available that delivered a mighty 221 kW (300 hp), although it was not possible to combine this unit with a closed-loop emission control system. But even without catalytic converter this so-called ECE version met emissions standards set down by the Economic Commission for Europe. The models fitted with this engine variant – the 560 SEL and 560 SEC – were in their day the most powerful Mercedes-Benz production cars ever built.

With the introduction of the new model range, the diesel model – which was still reserved exclusively for US export – was replaced by a modified variant. The new 300 SDL was presented with the additional space of the long version and featured an entirely new design of engine. This was based on the familiar 3.0-liter six-cylinder unit from the mid-range W 124 series, although this too was equipped with a turbocharger. The six-cylinder turbodiesel now delivered 110 kW (150 hp) – 44 kW (60 hp) more than the basic version without supercharger and almost 22 kW (30 hp) more than the five-cylinder engine of the predecessor model.

As was expected, the running gear of the facelifted models displayed no fundamental modifications. Nevertheless, the rear axle design was modified in a few details in order to improve ride comfort and reduce engine noise. In addition, all models in the W 126 series were now fitted with 15-inch wheels and larger brakes to match. The design of the optional light-alloy wheels – these were only standard equipment on the 560 SEL and 560 SEC – was updated to match those of the compact-class and mid-range model series.

The other stylistic modifications carried out on the improved models of the W 126 series not only served to update the design, but were also integrated for specific technical reasons. By lowering the aprons it was possible to further reduce front axle lift forces and improve airflow at the rear. This also had the effect of further enhancing directional stability and road adhesion when moving at speed, an aspect of considerable importance with respect to the performance of the new top-of-the-range 560 SEL.

The lateral protective strips were now smooth in design rather than grooved, and like the bumper system they reached down lower and included additional trim on the frame side members. As the 5.6-liter models came with wider 215/65 VR 15 tires as standard, unlike their lower-powered sister models, front apron and fender beading were modified in shape in order to create the necessary lateral clearance for the front wheels.

In September 1987, when the S-Class encountered an unusually chilly easterly wind in the form of the BMW 750 i, higher-performance variants of all V8 engines were introduced. Compression ratios in all cases were increased to 10:1, and additional measures were taken to improve performance by between six and ten percent depending on the model. The effect was even clearer in the case of the variants with catalytic converters: By optimizing the emission control equipment the designers succeeded in significantly reducing power loss due to the catalytic converter. The ECE version of the 5.6-liter V8 was discontinued without a replacement, since as a result of the treatment to increase output the catalytic converter retrofit version was now also capable of developing 221 kW (300 hp).

At the Paris Motor Show in September 1988, the model range was expanded to include the 560 SE from the W 126 series, thus making the 5.6-liter engine available in a saloon with conventional wheelbase. 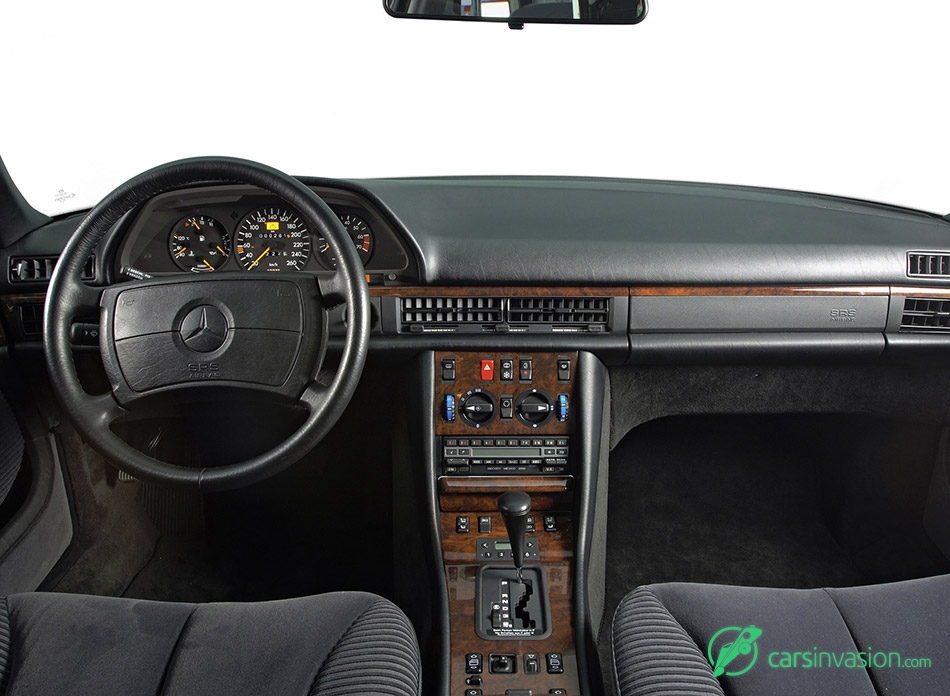 From June 1989 a new variant with diesel engine was produced, although this too was only available in the USA. Production of the previous 300 SDL had already come to an end in September 1987. The 350 SDL model had a new 3.5-liter six-cylinder engine that had been developed by increasing the bore and stroke of the tried-and-tested 3.0-liter unit. The new turbodiesel was designed more for torque than output and, with exhaust gas recirculation and oxidation catalyst, generated 10 kW (14 hp) less than its predecessor in spite of the larger displacement. But the 350 SDL's 100 kW (136 hp) was more than adequate, especially given the speed limits that applied throughout the USA. Maximum torque was increased by almost 15 percent and was reached at just 2000/min. In June 1990 the 350 SD with a conventional wheelbase was introduced to go alongside the 350 SDL.

As was the case with the predecessor series W 116, the eight-cylinder W 126 models were also available as armoured variants. Protection design had been further perfected after intensive development work and a total of 1,465 units were produced. Two 500 SEL models are of particularly interest here, both with a wheelbase extended by 200 millimetres and roof raised by 30 millimetres. The first of these was built in January 1983 and served as an additional representational vehicle in the company's own car pool. The second was built on commission from the Vatican for the Holy Father and handed over to Pope John Paul II in August 1985.

As successors to the W 126 series, eight W 140 series saloons were introduced at the Geneva Motor Show in March 1991. Although the new models went into production only a month later, the plant continued to turn out saloons of the 126 series for export for a while. Production of most variants came to an end between August and October 1991, although the last few armoured models did not come off the production line until April 1992. During the entire 12-year production period a total of 818,036 saloons left the production lines in Sindelfingen, 97,546 of them with diesel engines. That made the W 126 the most successful premium-class series in the history of the company.