‘Rethinking the car' was the motto adopted by Mercedes-Benz when it presented its Vision A 93 concept car at the Frankfurt Motor Show 1993. A compact, front-wheel drive vehicle, Vision A 93 was a completely new departure for the brand. And Mercedes-Benz made it clear that such a concept could well end up as part of its future model range. The reaction was instantaneous. Was this really supposed to be a Mercedes-Benz? It was left to the show-goers to decide. In the event their verdict was unusually favourable, with 80 per cent approving of a small Mercedes-Benz along the lines of Vision A 93. The concept car then drew more praise when it went on show with a few minor changes at the 1994 Geneva Motor Show, this time under the new name ‘Studie A'. For the American magazine ‘Motor Week' it was ‘Best Concept Car 1994'. By this time the matter had been settled and the Board of Management had given the go-ahead for production. The A-Class arrived on the market in 1998 and, despite initial problems, became a huge success story for the company. In 2004, a second generation, the W 169, took to the road. 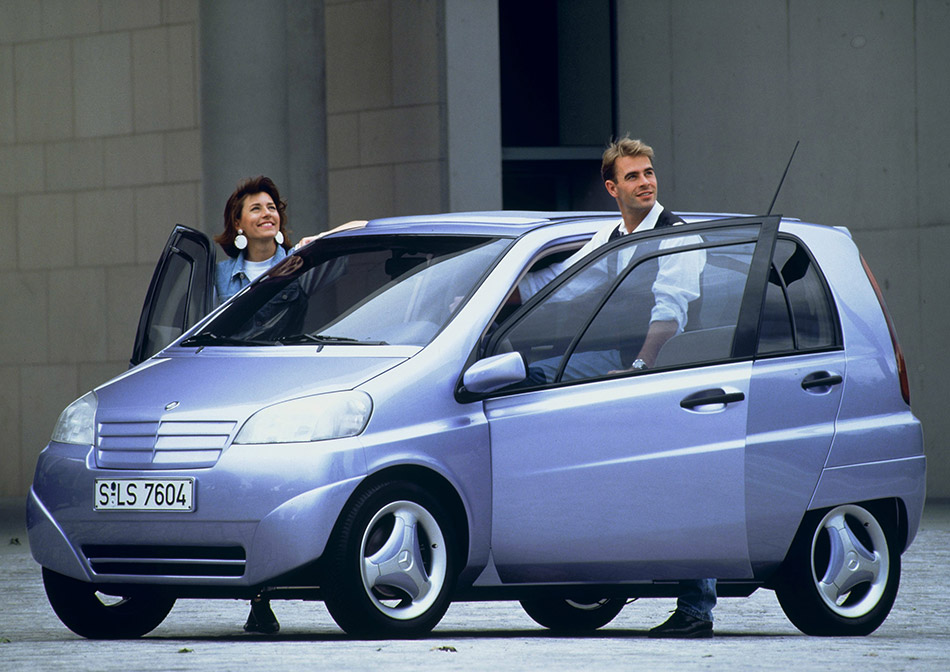 Following closely in the tracks of the ‘urban and short-distance vehicle' (NAFA, Nahverkehrs-Fahrzeug) concept of 1982 and the F 100 research vehicle of 1991, Vision A 93 introduced numerous ideas which were new to the automotive industry. That's hardly surprising given the ambitious objectives the engineers had set themselves in their design specifications. They included attractive design, subcompact exterior dimensions, a spacious interior, high everyday practicality and interior adaptability, highest standards of all-round safety conforming to typical Mercedes-Benz standards, low-pollutant, fuel-efficient engines and scope for alternative propulsion technologies.

All these objectives were met. Vision A 93 and the subsequent production model, the A-Class, can be credited with having had an important impact on the compact car, which underwent extensive changes following its appearance. ‘Vision A 93 will redefine the whole concept of the compact car,' predicted Jürgen Hubbert, Head of the Mercedes-Benz Passenger Car Division at the time, at its unveiling. ‘It proves that it is possible to translate the traditional Mercedes qualities like safety, comfort and reliability to a considerably smaller format, thereby securing urban mobility into the future.' And Dr. Dieter Zetsche, then Board of Management member responsible for Passenger Car Development, added: ‘Vision A 93 inaugurates a new era in automotive development. Mercedes-Benz is the first vehicle manufacturer to come up with a drivable near-production compact car concept which resolves the conflict between minimum overall length and maximum safety. Vision A 93 brings together both aspects into a single format which also offers the typical Mercedes qualities.'

Unusual challenges – Vision A 93 was to be small but at the same time spacious – called for unusual solutions. And that's exactly what the Mercedes engineers came up with when they developed the ‘ sandwich floor ' . In Vision A 93 the engine and transmission formed a compact unit which sat mainly underneath rather than in front of the occupants – a solution which also helped to maximise interior space. The distance between the driver or front passenger and the rear-seat passengers was 82.5 centimetres. That was the kind of figure previously only associated with upper mid-range models, as the press information was quick to point out. The concept vehicle was just 3.35 metres long, and the first version of the production vehicle, the short-wheelbase A-Class, measured just 3.60 metres. Another benefit of the sandwich floor was the high seating position, which gave a better view and added to the sense of safety.

The sandwich principle also allowed Vision A 93 to meet the same high standards as other Mercedes-Benz models on safety. In a frontal collision, the engine was shunted out of the way under the floor, thus preventing intrusion into the passenger compartment. This is an ideal solution for a vehicle with a short front section and therefore a short crumple zone. In other respects too, crash safety conformed to Mercedes-Benz standards. Further safety features included full-size driver's and front passenger's airbags, belt tensioners, large side impact protectors in the doors and an integrated child seat in the rear.

On styling, the Vision A 93 engineers were faced with a creative challenge. The unusual proportions – short and tall – made coming up with an aesthetically pleasing overall design rather tricky. At the same time, although this was intended to be a small car it was not supposed to look small. But the designers proved equal to the challenge. What they did was to develop an ‘integral' shape with an appearance similar to that of a people carrier. The windshield was positioned well to the front, with a high roof and a level floor. The short front end was skilfully integrated in the overall design.

The then Mercedes-Benz Design Chief Bruno Sacco described the aim as follows: ‘The combination of compact exterior dimensions, a high frame/floor and a spacious interior is a new one for Mercedes-Benz, and results in unusual proportions. By incorporating large window areas and a lower waistline, we have been able to tweak these proportions so that the Vision A appears larger at first sight than it actually is.

Nevertheless a variety of telltale Mercedes features convey a sense of safety, elegance and soundness, and make this more than just a compact vehicle. Together with the innovative engineering they make Vision A every inch a genuine Mercedes-Benz. The styling sets trends rather than following them, blazing a trail for future generations of urban and short-distance vehicles.'

A further important feature of Vision A 93 was environment-friendly design, for example as regards the drivetrain. Three versions were presented. Two 1.2 litre, three-cylinder internal combustion engines – a direct-injection diesel engine (44 kW/60 hp) and a petrol engine (55 kW/75 hp) – offered excellent fuel efficiency and lowest possible emissions. They were combined with a continuously variable transmission (CVT), which brought further benefits for economy. At the same time a further version was presented which featured a 40 kW/54 hp electric induction motor, whose battery gave a range of 150 kilometres in urban operation. Also, as the design specifications had envisaged, Vision A was well-suited for other types of alternative propulsion as well. Since 1997, Mercedes-Benz has been using the A-Class in fuel cell trials. This had been planned from the outset, and is mentioned in the original Vision A 93 press kit. Another environmental feature was the use of natural materials in the interior like flax and wool, along with new types of materials which were designed for recyclability.

Vision A 93 also explored the use of aluminium, with an all-aluminium body structure consisting of high-strength extrusions. This brought weight savings of approximately 70 kilograms compared with a similar body made of sheet steel. The petrol-engined Vision A weighed just 715 kilograms, the diesel version just 735 kilograms. The electric version, at approximately 1,000 kilograms, was no heavyweight either, despite the extra weight of the battery.

As Vision A and the A-Class demonstrate, even for an unusual design like this the timeframe from concept to production can be quite short. The new compact model proved something else as well: that unusual concepts will always find a place on the market provided they are well thought-out and genuinely focused on future needs.