After four years in production and around a million vehicles sold, Mercedes-Benz is presenting the new generation of its world-beating E-Class. Some 2000 parts in the E-Class are new or further developments. The Saloon and Estate boast new bodystyling, which is even more dynamic, poised and assured than before. The E-Class is once again setting the benchmark as the technology trendsetter. No other car in this market segment can match the range of safety innovations including PRE-SAFE®, Intelligent Light System, NECK-PRO head restraints and adaptive brake lights. These extensive safety features make the E-Class the safest car in its class. The DIRECT CONTROL package, with more direct steering and a retuned suspension, and six new or enhanced engines take agility and driving pleasure to new heights. Maintaining the same level of fuel economy, these engines develop up to 26 percent more output and 18 percent more torque. The prices for the four and six-cylinder models remain unchanged despite the more extensive standard specification.

The E-Class was the No. 1 archetypal executive saloon in Western Europe in 2005, accounting for 30 percent of the market. In Germany 38 percent of all buyers of premium models chose the E-Class Saloon, helping maintain the Saloon's position as German market leader for four years running. Worldwide Mercedes-Benz has sold around a million vehicles from the current E-Class line-up since spring 2002 - 860,000 Saloons and 140,000 Estates. 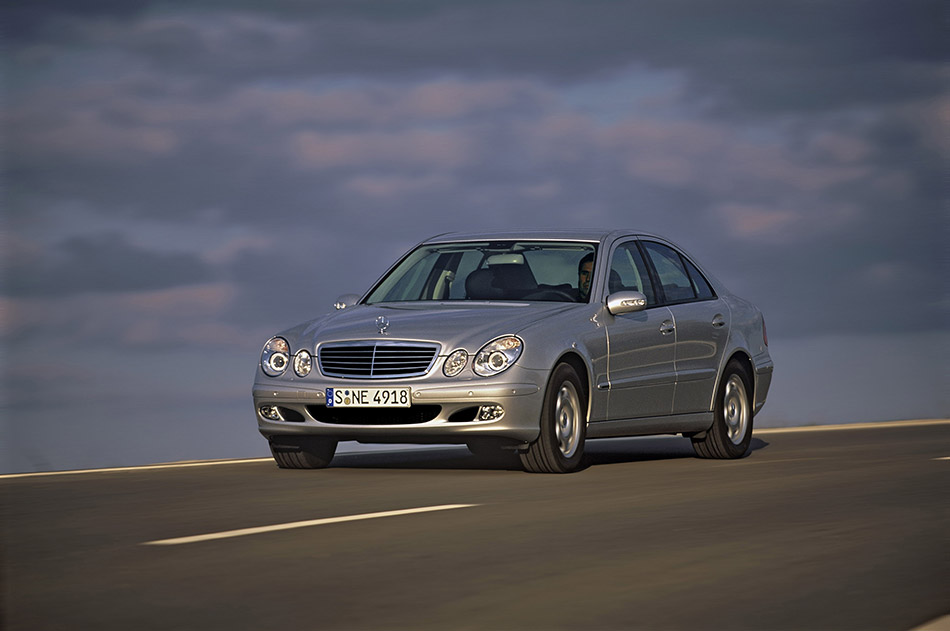 For over 60 years the E-Class and its predecessors have been the "heart" of Mercedes-Benz, representing basic brand values like safety, comfort, innovation, economy and quality. Since 1946 Mercedes-Benz has delivered some ten million luxury sedans to customers all over the world.

In June 2006 the E-Class will be unveiled with an even more dynamic concept, additional pioneering innovations and an upgraded standard specification.

A revamped front-end design reflects the dynamism, power, poise and assurance of the new generation E-Class. The bumper and radiator grille feature a pronounced V-shape, which epitomises power and forward motion. Mercedes Benz has enhanced the familiar twin-headlamp face of the E-Class by adding transparent louvres to the top section of the headlamps, producing a striking light effect when switched on. And for the first time white LEDs have been used as parking lights. Mercedes-Benz has further accentuated the dynamic appearance of the E Class on all model variants with side skirts and rear bumper in the AVANTGARDE design.

Inside, the new generation model differs from the outgoing model with new eye-catching colours, a new four-spoke steering wheel featuring elliptical thumb-operated buttons and a new control unit for the standard-fit THERMATIC automatic climate control. The Mercedes designers have also redefined the coordinated colour schemes, upholstery and materials; for the AVANTGARDE line in particular there are two new colours (cognac brown and sahara beige), which add an extra touch of refinement in conjunction with the black roof lining.

Safety: setting the standards in the premium segment with PRE-SAFE® and other innovations

Pioneering innovations help the E-Class continue to set the pace of passenger car safety in its market segment: Saloon and Estate are equipped as standard with the anticipatory PRE-SAFE® system whose "reflexes" respond before an impending collision by activating protection measures for the driver and front passenger. As a result, the seatbelt and airbag provide maximum protection in the event of a collision. PRE-SAFE®, a world first which went into series production in the S-Class in 2002 and since then has received numerous international awards, heralds the start of a new era in vehicle safety. No other premium-class model can offer this kind of anticipatory protection system.

The standard-fit NECK-PRO head restraints on the E-Class are equally unique. During a rear impact the sensor-controlled head restraints are moved forward to provide protection for the driver's and front passenger's heads within milliseconds. The crash-responsive head restraints prevent the upper spinal column from bending as a result of the accident, reducing the risk of whiplash injuries, one of the most common accident injuries costing around eight billion euros annually in the European Union.

Mercedes-Benz is fitting the new generation E-Class with flashing brake lights to prevent rear-end collisions. They warn the drivers behind more effectively than conventional brake lights when there is a risk of an accident. Tests conducted by Mercedes engineers show that the drivers' braking reaction time can be shortened on average by up to 0.2 seconds if a flashing warning light is used during emergency braking. As a result, the braking distance can be reduced by 5.50 metres at 100 km/h.

Mercedes-Benz has also consistently fine-tuned the occupant safety features on the E-Class. The Saloon and Estate meet the most stringent international crash standards such as the U.S. 80 km/h rear impact test or the new U.S. side crash test, which simulates a collision with a heavy off-road vehicle. To date, the E-Class has completed some 330 crash tests as part of ongoing improvements to vehicle safety.

The new generation E-Class is the first vehicle to feature adaptive headlamps, which respond to the prevailing driving and weather conditions providing a significant improvement in driving safety. The Intelligent Light System, available as an option for the Saloon and Estate, is based on the powerful bi-xenon headlamps and includes five different lighting functions: the new country mode provides brighter, further illumination of the offside verge than the previous low-beam headlamps. Here the driver's range of vision is increased by around ten metres, which allows him to recognise other road users or obstacles earlier in the dark. The motorway mode, activated automatically at speeds above 90 km/h, produces an even light cone that extends to a range of up to 120 metres, illuminating the entire road width. In the centre of this light cone the driver can see around 50 metres further. Thanks to the enhanced fog lamps, also part of the new Intelligent Light System, Mercedes-Benz has also improved orientation in fog whilst reducing backglare.

The engineers in Sindelfingen have further developed and improved the Active Light System, which Mercedes-Benz unveiled in the E-Class in spring 2003. Another component of the Intelligent Light System is the cornering light function, which provides enhanced safety when turning at intersections or taking bends slowly.

Six of the 10 engines in the new generation E-Class are new or further developments. They provide up to 60 kW/82 hp more output and up to 70 Nm more torque. Nonetheless the fuel consumption figures remain on a par with the exemplary level of the outgoing models: one in three Mercedes models sporting an "E" on the model badge uses less than eight litres of fuel per 100 kilometres; the average fuel consumption of all body and drive variants in the line-up from the E 200 CDI to the E 500 is just nine litres per 100 kilometres. As such, the E Class will continue to build on one of its outstanding features: economy.

The Mercedes engineers have optimised the four-cylinder diesel engines in the E 200 CDI and E 220 CDI right down to the last detail. Over 90 components in the CDI engines are new or further developments. All these measures add up to a substantial advance in terms of output, torque and smoother running. While fuel consumption remains consistently low at just 6.3 litres per 100 kilometres, the output of the E 200 CDI has been increased by 10 kW/14 hp to 100 kW/136 hp. Maximum torque has been increased from 270 to 340 Nm.

Balancer shafts in the crankcase, standard specification also on the E 200 CDI, provide the sort of smooth-running characteristics more readily associated with a six-cylinder engine.

In the USA the E-Class in the guise of the E 320 CDI since 2004 is the first diesel model in the premium-class segment in the USA. From model year 2007 Mercedes-Benz intends to launch the first diesel production vehicle in the USA with the trailblazing BLUETEC technology, which will provide further remarkable reductions in nitrogen oxide emissions. The future E 320 BLUETEC will be the world's cleanest diesel, using 20 to 40 percent less fuel than comparable petrol-engined vehicles. In Europe Mercedes-Benz plans to launch BLUETEC in a passenger car model by 2008.

When it came to the petrol engines, the Mercedes engines paid particular attention to the four and eight-cylinder variants. The four-cylinder engine in the E 200 KOMPRESSOR delivers 12.5 percent more output than before: 135 kW/184 hp. At the same time, maximum torque has been increased to 250 Nm.

From mid-2006, the E-Class engine range will be headed by the newly developed 5.5-litre eight-cylinder engine from the S-Class with an output of 285 kW/388 hp. Compared with the previous V8, the new engine delivers 26 percent more output. At 530 Nm the torque also comfortably exceeds the maximum for the preceding engine by around 15 percent. The new E 500 delivers the performance profile of a sports car: the Saloon accelerates from 0 to 100 km/h in just 5.3 seconds, 0.7 seconds faster than the previous E 500.

The new E 63 AMG from the Mercedes-AMG stable is fitted with a naturally aspirated V8 engine delivering 378 kW/514 hp and maximum torque of 630 Nm. The E 63 AMG is the most powerful E-Class of all times.

The new generation of the successful Mercedes model series looks more dynamic, delivers more power and also offers even more agile handling. DIRECT CONTROL makes this possible: with this standard-fit package the Mercedes engineers have made remarkable progress in terms of handling dynamics, without compromising the combination of safety and long-distance comfort, the consistent hallmark of the E-Class Saloon and Estate.

The ADAPTIVE BRAKE system is taken from the new Mercedes-Benz S-Class and provides new safety and comfort features thanks to the electronic control of the hydraulic dual-circuit brakes. An automatic tyre pressure loss warning system also forms part of the extended standard equipment on the E-Class.