Mercedes-Benz scored a perfect hit with the SLS AMG. The sports car developed by the high-performance label AMG is clearly an homage to its legendary 300 SL-ancestor from the late 1950s and the early 1960s.

As a Gran-Turismo-Coupé or a Roadster alike, the SLS reflects its characteristic proportions and design features, such as the slightly forward-inclined grille, the incredibly long motor cowl, the upwards curving winged doors (in the coupé) and the rounded rear with flat tail lights. All of this is presented in a modern interpretation. With the retro/modern style mix, the SLS AMG secures its status as a legend even during its lifetime.

Since every legend must be exclusive to a degree as well, the last hour of the current SLS has already come. At the moment, the sports first presented at the IAA in Frankfurt in September 2009, available for sale since March 2010 and sold more than 5,000 times is ending with the "SLS AMG GT Final Edition" special model, limited to only 350 cars. 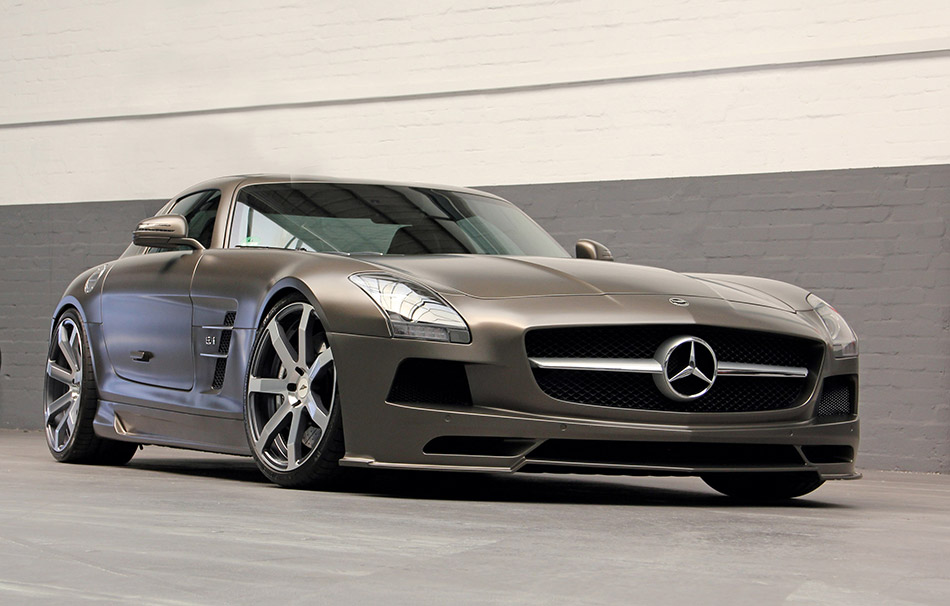 In light of this myth, even the refiners of DD customers from Hamburg, known for their usually rather extroverted style, were comparatively restrained in their modifications to the SLS AMG coupé shown here. The body of this sleek Swabian car was refined with a body kit carefully sharpening its looks without influencing the vehicle's character. The aerodynamics updates are made up of a front bumper with a suggestion of a cup spoiler, side sills and a tail apron characterised by its diffusor.

Matching the car body modification, DD Customs also gave the SLS AMG a refined as well as masculine wheel/tyre combination. In accordance with the factory version of this sports car, DD Customs also relied on a combination of different wheel rim diameters, installing the "Challenge" design from the portfolio of the Swiss rim producer Corniche Sports Wheels in 9x20 inches for the front and 10.5x21 inches for the rear axle. Particularly at the rear axle, the rims made from a single piece and characterised by seven solid spokes present their apparent concave shape, thus reflecting the trend of current wheel rim fashion. The Challenge wheel rims were combined with Michelin Pilot Sport tyres with a good grip, sized 265/30R20 and 295/25R21 respectively.

Extreme lowering and a noticeably even more dynamic driving behaviour as compared to the serial vehicle, while still retaining suitability for everyday use – this split is mastered well by the version 3 undercarriage from KW automotive. The coilover suspension not only has push-and-pull stage dampenings that can be adjusted independently of each other to permit individual setup according to any driver's personal tested, but is also combined with the KW Hydraulic Lift System, offering a brief increase of the vehicle's ground clearance by up to 40 millimetres on the push of a button. This makes speed bumpers, uneven roads, construction sites, a well as multi-storey car parks and the entrance for underground parking garages less horrifying.

DD Customs mostly left the 6.2 litres V8-motor in its technical serial condition. A new sports exhaust from the car, however, gives the freely extracting high-speed eight-ender a surprising variation of voice by the push of a button thanks to flap control by wireless remote: from an unobtrusive grumble to a splitting growl, the DD Custom-SLS offers the entire goosebump bandwidth across several octaves.