Rising temperatures call for a retractable roof, and for the first time in its three-generation history the high performance Audi S3 now has an answer to that call. The all-new 300PS S3 Cabriolet - the first ever soft-top version of the acclaimed high performance compact - is available to order now priced from £38,910 OTR, and is set to arrive with UK customers from September.

At the same time, the TDI arm of the open-air A3 range has also been bolstered by a muscular 184PS 2.0-litre TDI engine which is notable as the first in the history of the A3 Cabriolet ever to be offered with the option of quattro all-wheel-drive. Providing a highly desirable combination of strong performance and 65mpg-plus economy potential, the A3 Cabriolet 2.0 TDI 184PS joins the range priced from £29,735 OTR, and takes to our roads from October.

Common to both is of course a soft but extremely hard-wearing and exceptionally sound-absorbent acoustic soft-top with three-layer inner padding. This is stretched over a lightweight kinematic mechanism made of magnesium-steel which opens them up to the elements fully automatically in a little under 18 seconds at speeds of up to 31mph. 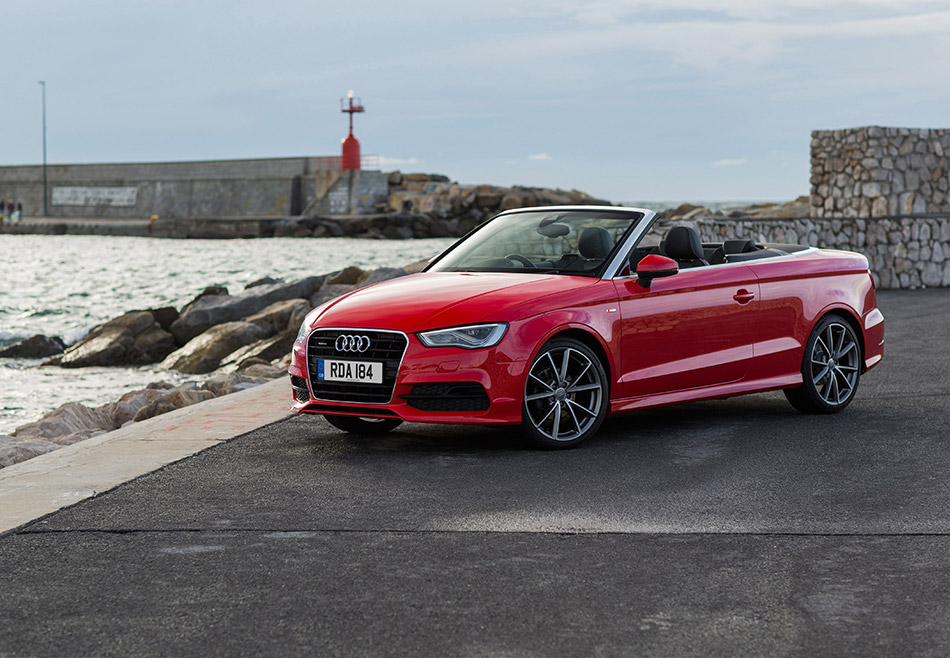 Beneath the bonnet of the trailblazing S3 is the acclaimed EU6-compliant 2.0 TFSI engine, linked exclusively here to six-speed S tronic transmission and apportioning its power four ways via the multi-plate clutch-based quattro all-wheel-drive system. Its substantial 300 PS power peak is available between 5,500 and 6,200rpm and peak torque of 380Nm is on tap from 1,800-5,500rpm, so a 5.4-second 0-62mph sprint and a governed 155mph top speed are well within its grasp. Combined fuel consumption stands at an impressive 39.8mpg, corresponding to CO2 emissions of 165g/km.

The S3 Cabriolet's 19-inch alloy wheels amply fill the arches helped by sports suspension which lowers the body by 25mm over its A3 counterpart, and the added tautness and composure it provides is boosted by standard Audi Magnetic Ride adaptive damping. Continuously analysing the driver's style and the condition of the road, the system can adjust the damping forces applied by its magnetorheological fluid-filled shock absorbers within milliseconds. It offers three modes – Auto, Dynamic and Comfort – accessible via the Audi drive select system which is also fitted to this version as standard.

Inside, the S3 Cabriolet benefits from a standard flat-bottomed three spoke multi-function steering wheel wrapped in leather and pedals in brushed stainless steel. Grey instrument dials with white needles embellish the instrument cluster and a boost gauge is integrated into the rev counter. The heated, S embossed front seats are upholstered in Fine Nappa leather with contrasting silver stitching.

An array of customisation options can be selected from the options list, from the stunning Sepang blue, pearl effect and Panther black, crystal effect exterior colours to the Parade red design package, which lines the upper seat shoulders in Parade red velvet and the door trim inserts in black velvet. Contrasting red stitching also extends to the seats, leather steering wheel, gear lever and gaitor, and the floor mats are finished with Parade red piping. Striking red brake calipers can also complete the exterior enhancements.

All-wheel-drive debut for the A3 Cabriolet

For drivers who prefer diesel but also like their A3 Cabriolet to pack a punch, the 184 PS version of the 2.0 TDI engine has just supplemented the existing 150PS 2.0 TDI. The new performance flagship it creates in the TDI range is also the first A3 Cabriolet to offer the option of quattro all-wheel-drive. The new unit is available in conjunction with either Sport or S line specification, and with either six-speed manual transmission and front-wheel-drive or the six-speed S tronic twin-clutch transmission and quattro.

In manual, front-wheel-drive form the more powerful 2.0 TDI can return an impressive 65.7mpg on the ECE combined cycle, while emitting just 114 grams of CO2 per kilometre. Top speed is 150mph and the 0-62 dash takes just 7.9 seconds. In the version combining S tronic transmission with quattro drive the 0-62mph time falls to 7.6 seconds, and the top speed to 147mph, while combined MPG and CO2 stand at 56.5 and 132g/km respectively.