Of the strictly limited edition SLS special edition "Black Series", Mercedes Benz produced only 60 pieces so that only selected customers will enjoy the pleasure of this dream sports car. SGA Aerodynamics now offers a body kit, with which every person will be able to fulfil his/her personal dream and visually elevate his/her SLS to the "Black Series" level!

In the process, the body kit strongly follows the visual line of the legendary SLS AMG "Black Series". During the presentation last year, it constituted the link between the road SLS and the racing version SLS AMG GT3. Accordingly, the technical equipment of the "Black Series" was, above all else, innovative. However the visual appearance was also completely re-designed and intensified with broad jaws, air inlets and outlets as well as carbon flaps. Lovers of this visual appearance will not find a way around the new body kit of SGA! 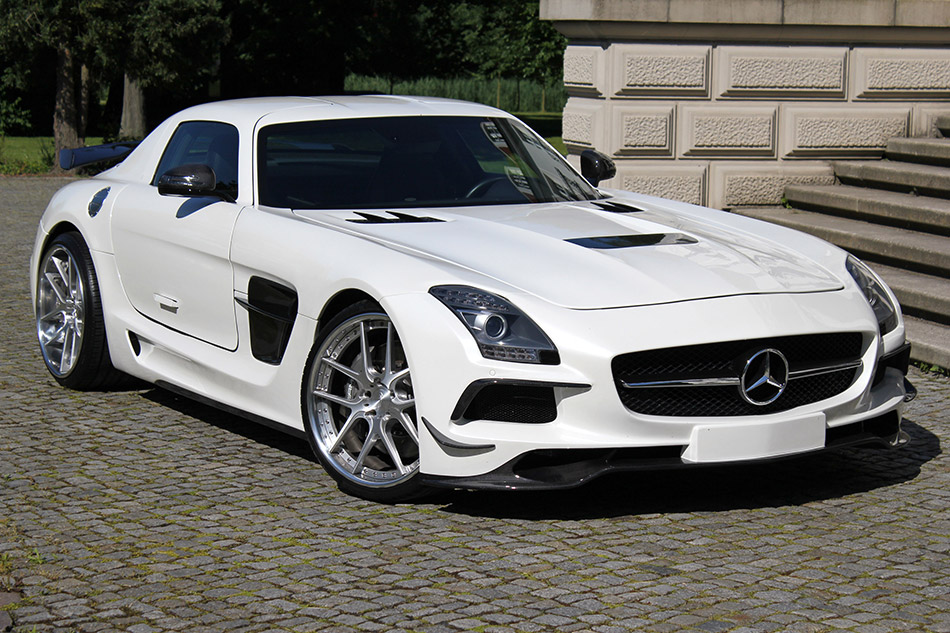 The front stands out for the two-layer spoiler that is deeply drawn down and framed by the carbon fibre flaps. The engine hood is also completely new and houses the typical air outlet. The broad side skirts on the side with their air inlets are framed by broader wheel houses. The front mudguards carry extensive applications made of sichtcarbon while the tank cover was modelled into the rear enlargements. Carbon mirror caps serve as a further boost to the visual appearance. Finally, there is a protruding rear apron with lateral gills resting on the rear. The big diffuser, which equally has a double layer is made up of carbon fiber and is penetrated by the original black series exhaust end pipes. A huge, adjustable carbon rear wing, which – to a very specific extent – puts the crown on the entire package, is enthroned one further layer upwards. The innocent painting in exclusive diamond-white underscores the carbon fiber structural components and creates a beautiful contrast.

The sports exhaust system that was newly developed by the partner MAE Design has an electronic valve control system and thus facilitates the setting of the acoustic pattern from the driver's seat. While only a comforting humming in noticed in normal operation and the drift towards the destination occurs in as comfortable a manner as possible, a single touch of the sports button of the remote control is sufficient to unleash the vicious sound of the eight cylinder car in full force.

Classy rims of the cooperation partner MAE Design rotate under the broad jaws of the wide body kit. The wheels of the forged series are mounted on the front axle in the dimensions 9 x 21 inches and with tires of size 245/30. On the rear axle, the three-part forged wheels with their five broad double spokes are of the size 12.5 x 21 inches and are clearly in concave form. The exceedingly opulent tires bear the designation 305/25 ZR 21 and owe this to the immense torque of the large volume eight cylinder beneath the long engine hood.