For more than a century, Daytona has been the motor sports Mecca of the USA. The famous long-distance classic, the 24 hours of Daytona, the NAS-CAR race in the pasta pot and the legendary stories about the early days of stock car sports in the times of the prohibition are located there. When the production, sale and shipping of alcoholic beverages for human enjoyment was prohibited, pilots smuggled the illegal substance across the USA in their tuned vehicles. At the same time, these hobby pilots liked to meet at Dayto-na beach at night for forbidden raves. Bill France Sr. was the first one who held a race on a blocked area of Daytona Beach in 1938. The winner would receive a box of cigars or a bottle of good whiskey. This first race led to the most successful racing series in the world after World War II: NASCAR – National Association of Stock Car Racing. 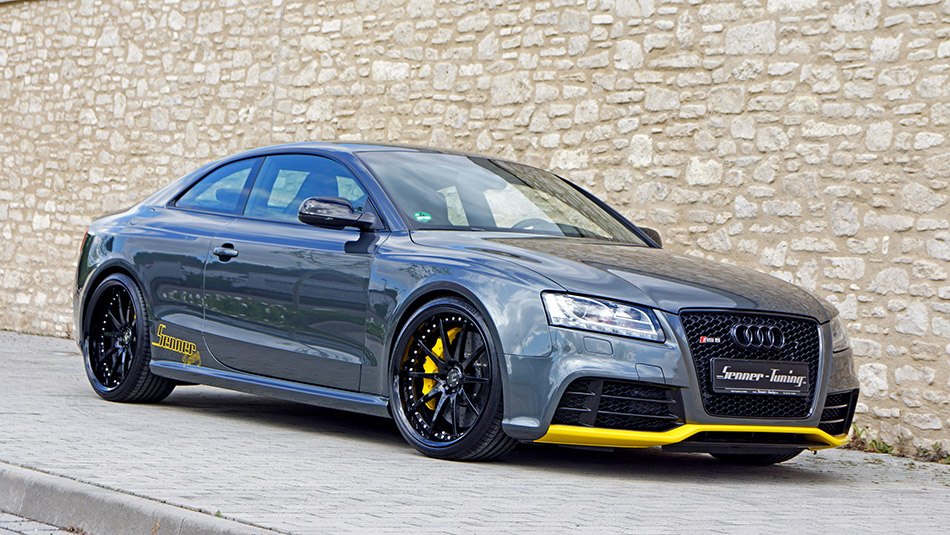 The Audi RS5 Coupé presented here, converted by Senner Tuning, would be loved by the fans in Daytona as well. Why? Because its cowl hides a classic booming V8-motor with a displacement of 4.2 litres and 450 serial PS. The Americans would like to double these last two parameters: a dis-placement of 4.2 litres looks more like small-car stuff to the sports car own-ers there! Still: even without increasing displacement, Senner Tuning's revi-sion of the motor software and the open sports air filter inserts increased the power. All in all, 504 horse power and a maximum torque of 478 Nm are now pulling on the drive shafts of the RS5 – painted in the Audi colour "Day-tona grey". To permit perfect conversion of output into drive, the tuners from Ingelheim gave the RS5 a Bilstein B16 PSS10-overcoil suspension in which the push and pull stage dampening can be adjusted separately. At the same time, the DRC- & RC function of the serial undercarriage was deactivated when the new one was installed. At the four ends of the sports undercar-riage, fine Competec C.01 three-part wheels are turning on star hubs and outer rim beds made in high-gloss black. The front has a 9.5x20 size with a bed of 2.5 inches and the rear a 10.5x20 size with a bed of 3.5 inches. These rim formats fill the wheel arches of the RS5 coupé perfectly. By the way, the wheels were covered with Continental Sport Contact 5P-tyres in the 255/30R20 and 295/25R20 formats.

The exhaust is treated by the in-house sports exhaust system with pre-muffler and backpressure-optimised flap control. Three different modes are available: travelling, sports and racing. The individual modes can even be called on the MMI-display in the cockpit. The serial chrome end pipe covers were replaced against glossy black pendants at Senner Tuning.

The coupé's car body was also modified slightly, including signal yellow car body additions, chrome edgings covered in glossy black film around the widows and side mirrors painted black. The rear spoiler and the Audi rings at the front and rear are now black as well. Finally, the black grille from the optional Audi appearance package is noticeable. Senner Tuning indicates the price for conversion of this exclusive RS5 coupé to be at approx. 23,550.00 Euro.