The spontaneous power delivery and precise handling of the MINI  all-wheel drive system ALL4 is now available in two more models: ALL4 will be available for the MINI Cooper Countryman and the MINI Cooper Paceman from July 2013. This increases the number of all-wheel versions within the MINI model range to ten models. The new models are also fitted with 6-speed manual transmission as standard, with 6-speed automatic transmission available as an option.

With the enhanced traction, driving stability and ability the permanent all-wheel drive system helps the driver stay in control while driving on snow, sand or slippery surfaces, as well offering extra grip on twisty roads.  ALL4 is based on an electromagnetic centre differential and distributes drive force at continuously variable levels between the front and rear axle. Its electronic control system is integrated directly in the DSC control unit (Dynamic Stability Control), enabling it to direct drive torque quickly and precisely to where it can be most effectively transformed into propulsion. 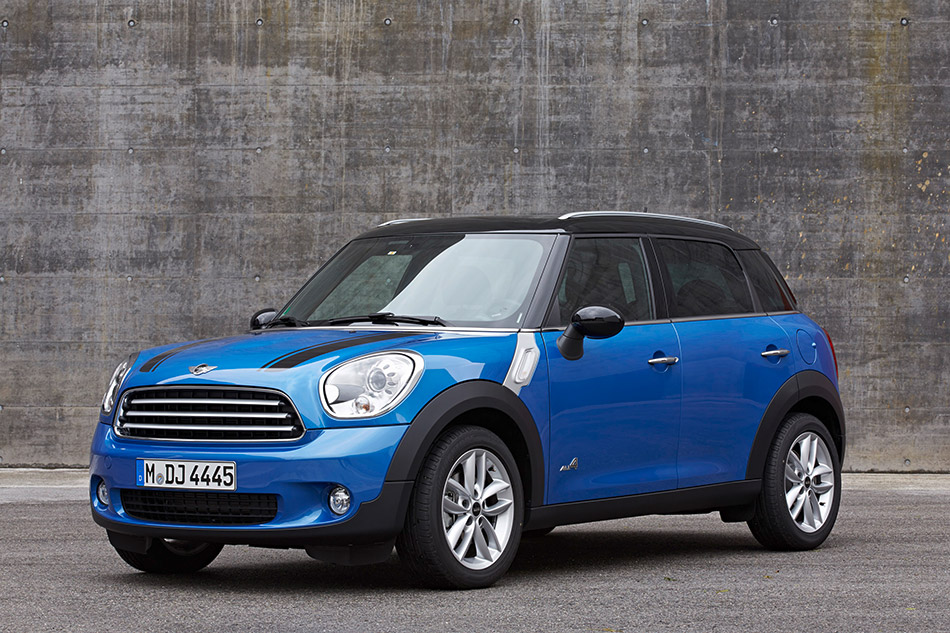 In the new models MINI Cooper Countryman ALL4 and MINI Cooper Paceman ALL4, the all-wheel drive system distributes the power of a 1.6-litre 4-cylinder engine with an output of 90 kW/122 bhp between the front and rear wheels. Spontaneous forward thrust is guaranteed by the engine's maximum torque of 160 Newton metres (190 Nm with automatic transmission), at an engine speed of 4,250 rpm.

As a result, the MINI Cooper Countryman ALL4 sprints from 0 to 100 km/h in 11.9 seconds (automatic: 11.7 seconds). The top speed is 184 km/h (182 km/h). Due to the high level of efficiency of both engine and drivetrain as well as extensive MINIMALISM technology, the boost in driving fun goes hand in hand with low levels of fuel consumption and emissions. The MINI Countryman ALL4 has an average fuel consumption of 6.9 litres per 100 kilometres (automatic: 7.5 litres) on the EU test cycle and CO2 emissions of 167 (175) grams per kilometre.

The relation between driving fun and fuel consumption is equally impressive in the MINI Cooper Paceman ALL4. This model takes 11.8 seconds (automatic: 11.6 seconds) to accelerate from standing to 100 km/h and attains a top speed of 185 (183) km/h. Its fuel consumption and CO2 emission levels on the EU test cycle are the same as those of the MINI Cooper Countryman ALL4.