Two years after the launch of the Phantom and its rapid establishment as the worldwide market-leading super-luxury saloon, Rolls-Royce is pleased to announce a new Phantom with an extended wheelbase. This new longer Rolls-Royce Phantom promises additional interior space for the rear passengers while maintaining the elegant look of the standard Phantom, its first-class driving performance and the comfort of front-seat occupants.

An extra 250 mm has been added to the standard length Phantom, behind the B-pillar, to create a motor car with an even more generously proportioned rear passenger compartment. Coach doors open to 80 degrees, offering exceptionally graceful egress and ingress. The extra space lends itself perfectly to the addition of Bespoke features, limited only by the imagination of the customer. 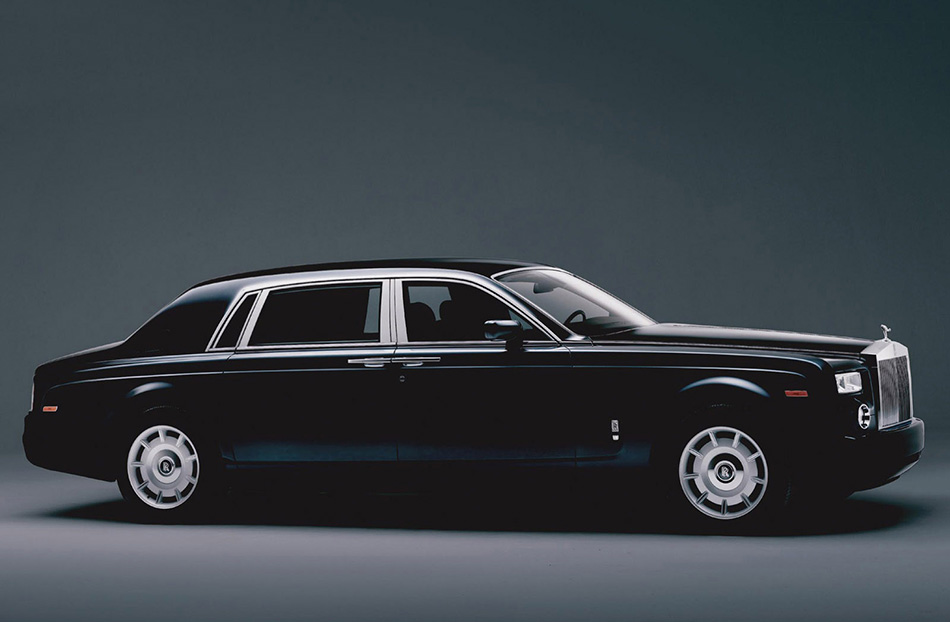 An extended-wheelbase motor car was planned in the early days of the Rolls-Royce Phantom project. Indeed, an aluminium space frame chassis was chosen precisely because it lends itself to structural adaptation with relative ease. This ability to create "coach-worked" models, to meet the individual needs and desires of Rolls-Royce customers, is something that has been central to the marque throughout its 100-year history. The standard Phantom body is already the largest automotive aluminium space frame ever constructed while the new extended wheelbase model adds nearly 10 inches.

The extra length with this new motor car is achieved simply by using longer extrusions in the construction of the body. Conventional extended-wheelbase cars are often built by cutting them and welding in extra metal – not so with Rolls-Royce. As a result of this approach, none of the Phantom's torsional rigidity is lost, so the outstanding dynamic performance and driving refinement of the standard length motor car are maintained.

The Phantom is already known the world over for giving the most luxurious of rides, worthy of the "magic carpet" description so often coined for the sensation of traveling in a Rolls-Royce. Sure enough, to ride in or drive a new extended Phantom is to experience extraordinary levels of refinement. Extraneous noise is reduced to a whisper and the super-strong chassis is almost totally free of vibration.

Aluminium roof and rear door panels are the only new exterior body parts: the longer Phantom shares all of its other major chassis and drive-train components with the standard motor car. The added weight of this extended model is minimal – just 75 kg more – so there is no need to make any changes to chassis or suspension systems.

All the Phantom chassis and body components are painstakingly hand-welded by a highly skilled team of specialists. Such is the level of craftsmanship involved that every technician is required to complete a series of tests each day before starting work, to ensure he meets the very highest quality standards that Rolls-Royce demands. Each piece of aluminium extrusion is placed on a precision jig before being welded by hand, allowing fine adjustments to be made by the technician. Every dimension of the body is checked by laser, to ensure it is built with total accuracy to a tolerance of less than half a millimetre – a remarkable figure for a car that is more than six metres long.

Power continues to be provided by the same highly acclaimed 6.75-litre, 48-valve, 453 bhp, 720 Nm V12 engine that was developed for the standard Phantom. Because the weight gain of the new extended wheelbase Phantom over the standard motor car is negligible, there is very little impact on performance or fuel economy. Driver and passengers can still enjoy the effortless and relentless urge of the engine from tick-over, riding on a wave of seemingly bottomless torque. At just 1000 rpm the Rolls-Royce V12 develops 560 Nm of torque – enough to waft the longer Phantom quickly yet silently to 60 mph in just 5.9 seconds and on to a limited top speed of 149 mph.

Rolls-Royce chief designer Ian Cameron was responsible for the interior and exterior look of the extended Phantom. "The challenge was to create a longer, more spacious motor car without compromising the elegant lines of the original. We found that adding 250 mm to the overall length of the Phantom gave an extremely well proportioned exterior form, while adding significantly to the amount of space in the rear passenger compartment." The measure of the design team's success is that, unless the two Phantoms are viewed alongside each other, it is not easy to tell which is the extended version.

The rakish looks of the original are retained on the new model. With an elegant swathe line that runs along the body, rising as it nears the front wings, the Phantom has the look of a motor launch at speed – a look which is the antithesis of modern "wedge" car design.

All of the extra 250 mm (10 inches) is added behind the B-pillar, so the rear-hinged coach doors are 250 mm longer as well. They open to 80 degrees, giving exceptionally easy access to the rear compartment. Once inside, of course, rear passengers have the luxury of the additional legroom.

An important benefit of this extra space in the rear is that it provides additional scope for adding personalised Bespoke features to the motor car. Bespoke is the name Rolls-Royce gives to its program of designing and building special items to meet specific customer requirements and has been offered by Rolls-Royce Motor Cars since the Goodwood era began in January 2003. It's a tradition that stretches back throughout the marque's 100-year history, however. From the early coach-built bodies, Bespoke is a word synonymous with Rolls-Royce. Customers do not order a Rolls-Royce, they commission it, just as they would a yacht or a piece of art.

All manner of features can be specified for the Phantom, including fridges, drinks cabinets, cigar humidors, special audio-visual systems and additional seating. The extra space in the extended version also allows for a division wall, for those rear passengers that require increased privacy. Hand-built from the finest materials, the division wall exudes all of the quality expected of a Rolls-Royce interior. The standard panel is finished using matching wood veneers and leather trim in two finishes. As well as turning the rear passenger space into a completely private environment, the division wall can be made to house a variety of additional Bespoke features.

Rolls-Royce anticipates that the new extended wheelbase Phantom will sell in relatively small numbers to discerning customers with a specific need for such a spacious motor car. Customers in the Middle East and the Asia Pacific region have already shown particular interest in an extended-wheelbase model and it is in these two areas that the motor car will be first be launched.