Soft top season is here and with both the MINI Convertible and the MINI Roadster to choose from, it's a tough decision - but the search for wind-in-your-hair driving fun ends here. Both models combine the irresistible charm of the premium British brand and thrilling go-kart feeling with made-to-measure open-top enjoyment.

The classic Mini didn't officially get its first open top until it was 34 years old. The convertible version of the revolutionary car joined the model range exactly 20 years ago, with a limited run of just 1,000. In 2004 open top enthusiasts welcomed arrival of the MINI Convertible with its hallmark proportions and design features, and an electro-hydraulically powered roof mechanism. The MINI Convertible swiftly established itself as a market leader and retains pole postion in its segment. Hot on its wheels is the sixth unique model in the MINI line-up, the Roadster. With the Roadster MINI continues to rewrite the rulebook; this is the first open-topped two-seater in the company's history. The cutting-edge design is typically MINI – an authentic re-interpretation of a classic motoring concept. This latest model offers the fun of driving a taut-handling roadster, with all the character of MINI. And being built at Plant Oxford means it can justifiably claim to be a spiritual successor to the traditional British roadsters of old.

Which of the two sun-seekers offers the more appealing open-top driving experience is entirely a matter for the individual to decide. The driver of a MINI Convertible can share the joys of summer travel with up to three passengers while in the MINI Roadster, the suntan and windswept hair are strictly for two. In terms of speedy access to the open fresh air the MINI Convertible can be partially opened - up to 40 centimetres - at the press of a button and fully opened in just 15 seconds. Only the MINI Roadster has the faster alternative here, activated manually. The soft top is unfolded and locked into place behind the seats in a single operation. There is also an optional semi-automatic open and close mechanism which simply requires the roof to be released and secured at the windscreen frame.

There are no compromises in either model when it comes to safety. Two rollover bars made of polished stainless steel behind the seats along with an extremely rigid windscreen frame form a stable passenger cell in the MINI Roadster. Accident protection is based on the same principle in the MINI Convertible, too, though here the single-section rollover bar springs up automatically behind the headrests at the rear from idle position.

This also enables the use of a large through-load opening between the luggage and passenger section, giving the MINI Convertible additional versatility.    With all seats in use, it has a storage volume of 125 litres with the top open and 170 litres when it is closed. Here the MINI Roadster wins hands-down with a transport capacity of 240 litres - impressively generous for this category of vehicle. However, things are a little different when the split rear seatback in the MINI Convertible is folded down. This increases its maximum load volume to 660 litres.

In both models, a light soft top and additional body reinforcements ensure a high degree of torsional stiffness and a low centre of gravity, making for increased agility when cornering at speed. The MINI Roadster is a tad more radical when it comes to combating the airstream. Its A-columns have a greater tilt angle, and from a speed of 80 km/h the active rear spoiler automatically extends to optimise aerodynamic balance. 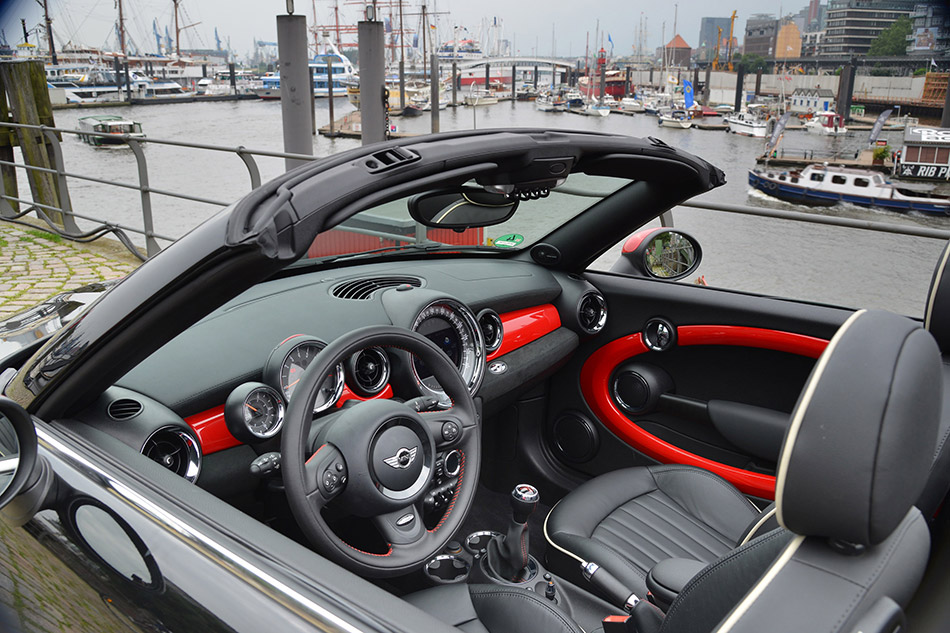