Sculpted using materials processed as little as possible, this supercar has been created by enthusiasts who have drawn their inspiration from the world of competition. With its V8 engine in a central rear position, the Peugeot Onyx Concept propels its admirers into a world of high performance, controlled in all circumstances thanks to intuitive instruments and controls. In addition to its stunning aesthetics, it explores new 'raw' materials, to take efficiency to another level.

A passion for innovation has never ceased to find its expression over the 202 year history of Peugeot, one of the oldest marques in the motor industry. Furthermore, it is the only one to offer a comprehensive range of personal means of transport: bicycles, scooters, cars and light utility vehicles. The Peugeot Onyx Concept Bike and Onyx Concept Scooter are also expressed with this vision of the future and will preview on Peugeot's stand at the 2012 Paris Motor Show.

"Onyx has the strength of a supercar, with extremely aerodynamic lines. It is made unique by its sculpted, chiselled style and by the innovative materials and structure." Gilles Vidal, Peugeot Style Director 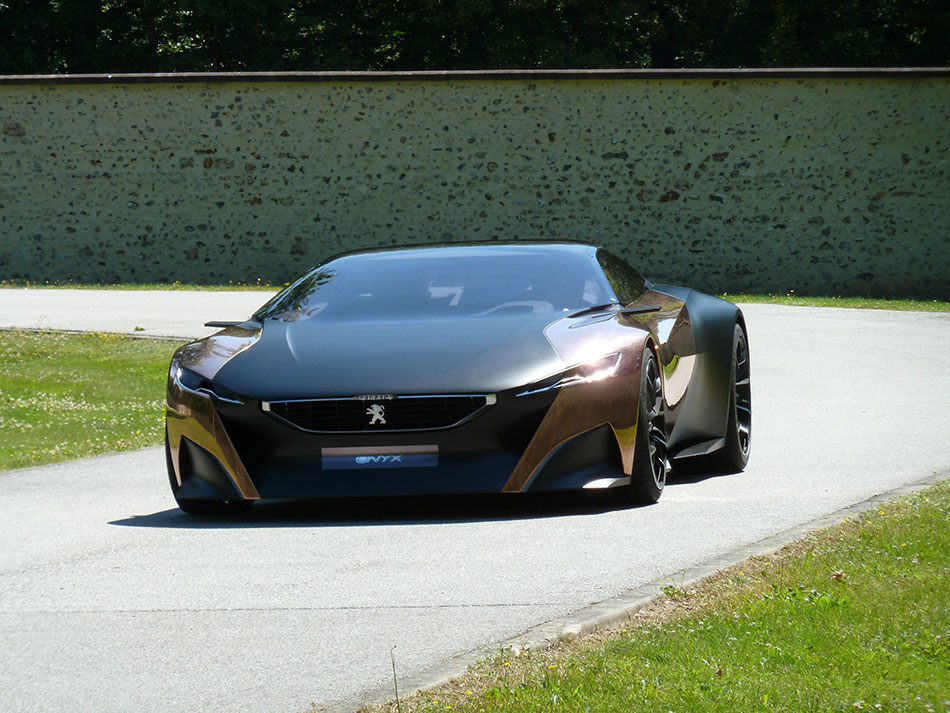 A radical silhouette... an intense emotion from the first glance

The sharp bodywork calls out with the striking contrast of its materials and colours. Fashioned by hand by a master craftsman, the wings and doors are pure copper sheet. A polished mirror, this metal does not need to resort to tricks to protect itself. So, its appearance will change over time, gaining a patina. The Onyx is alive! As for the other panels of the bodywork, these are carbon fibre, painted matt black.

Slicing through the air with finesse, the front face unites the vertical grille and full LED lamps, tapered, their surface area reduced to a minimum. The flow then separates; some penetrates into the heart of the vehicle, flowing inside the bodywork and the structure to supply the engine with air. The remainder of the flow spreads, skimming along the sides and the 'double-bubble' roof. Finishing off the Peugeot Onyx Concept with beauty, the rear lamps adopt a light signature with three claws now characteristic of Peugeot. They also support small spoilers which direct the upper and side flows. These reunite as far as possible from the bodywork to reduce drag. With a Cd of 0.30, the aerodynamic impact of the Onyx is inversely proportional to its visual impact.

A link between experience and the future, the Peugeot Onyx Concept incorporates the present by paying tribute to the RCZ through its 'double-bubble' roof and aluminium arches. With complete transparency, revealing the carbon fibre structure and the passenger compartment, the windows and roof are made of PMMA (PolyMethyl MethAcrylate). Enclosing the cocoon, they guarantee the occupants' optimum protection due to its ultra-resistant structure.

"The silhouette of the Onyx is sculpted softly, sensuously, but it is also alive and technological. From the first sketches I wanted to create a showcase for technological excellence and craftsmanship by combining elements demonstrating high aerodynamic performance, Black Diamond lamps and copper bodywork panels fashioned by hand." Sandeep Bhambra, Onyx Exterior Stylist

The chassis of the car is an innovative component, developed with the expertise of Peugeot Sport and the Group's Research and Development Department. In monolithic carbon, this central structure consists of only 12 parts. It incorporates the front and rear chassis legs, which makes it possible to eliminate the connected plates. The torsional stiffness and weight of the structure is optimised, at barely 100kg.

Bolted onto the carbon fibre shell, the 3.7-litre V8 hybrid HDi FAP engine and the suspension bear all the experience of Peugeot Sport, acquired and confirmed on tracks all over the world. Cooled by ducts which begin at the roof via NACA take-offs, the V8 transmits its 600bhp to the rear wheels via a six-speed sequential gearbox. This power ideally exploits compact proportions: 4.65m long, 2.20m wide, 1.13m high and of only 1100kg. Fitted with tyres specially developed by Michelin, 275/30 at the front and 345/30 at the rear, the 20" wheels see their hub retained on the structure by a double wishbone and an in-board controlled suspension, both at the front and at the rear.

Intelligent, the HYbrid4 technology recovers the kinetic energy which is usually lost during braking. Stored in lithium-ion batteries, this energy is then delivered automatically on acceleration, boosting the power by an additional 80bhp. The management of this function is transparent to the driver, as is that of the engine which has represented a real challenge. In fact, the engine designers had to make suitable for the road, an engine which, in competition, operates in an extreme range.

With less than 2kg per horsepower, the Onyx achieves high performance without altering the purity and elegance of its style. To obtain this result, the Peugeot Onyx Concept is fitted with a flat carbon fibre floor, which creates a powerful ground effect. So, the aerodynamic components could be limited to a strict minimum, by means of extensions of the carbon fibre structure and the moving spoiler which loads the rear suspension during braking. Braking is provided by four carbon discs, 380mm at the front and 355mm at the rear.

Innovative instruments and controls for a unique experience

The doors, the interface between the bodywork and the passenger compartment, offer easy access thanks to their two-movement kinematics. On opening, the outer copper skin separates from the door inner panel and moves laterally by a few centimetres before pivoting around its axis of rotation.

The passenger compartment is bathed with natural light, from floor to roof. Like the bodywork, it has the minimum amount of material retaining only that necessary to make the components and retain them. The result is an uncluttered passenger compartment, in close proximity to the occupants.

"We sought materials fit for a supercar, then they presented themselves of their own accord by their obvious suitability. Carbon for high performance, copper and glass for tradition, felt and paper, natural and used every day."

Made of felt, compressed and stretched, the passenger compartment is formed as a one-piece pod, with no stitching or joins. It creates a real cocoon around the occupants and fitted into the carbon structure, visible in places, fulfils the functions carried out in the past by several components: soundproofing, floor, upper console, roof, bucket seats.

The occupants become one with a uniform part, which also reduces weight. Their sporting comfort has been incorporated with the insertion of foam, under the felt, in the areas of contact with the body.

Warm and soft, the felt originates from an ancestral tradition. Obtained from boiled wool, with intertwined fibres, this material is fully recyclable and provides excellent thermal insulation. In addition, it improves the quality of the surrounding air by dehumidifying it.

"For the interior, I was inspired by an everyday object, the egg box. With remarkable economy of material, it protects very fragile items. I adapted the concept into an intuitive space, with a minimum of connected parts, to become one with the car." Julien Cueff, Onyx Interior Stylist 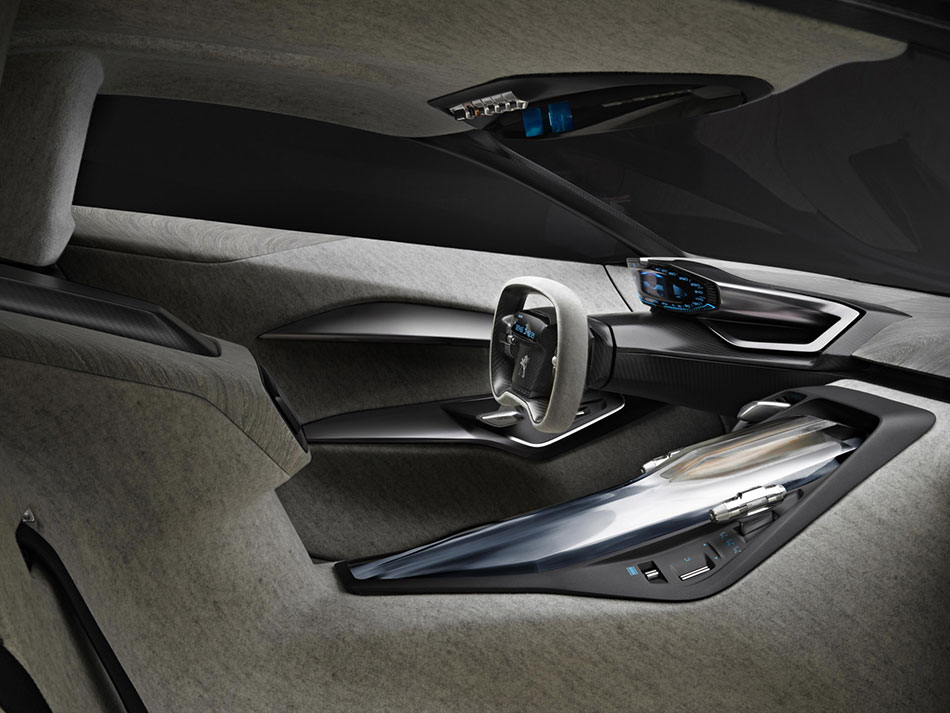 On board, the driver finds each control without having to take his eyes off the road. The small steering wheel with felt rim falls naturally into the driver's hands and gives an immediate feeling of agility. On its carbon hub the aluminium controls operate the functions of the Onyx, while paddles control the gearbox.

The dashboard is made of a new type of "wood", Newspaper Wood. It is produced from used newspapers, assembled and compressed to create new 'logs' from which the parts are made. The illusion is perfect, with grains which run across the surface. On closer inspection it reveals the secret with the appearance of printed characters.

A panel of aluminium toggle switches is installed in the roof, including the engine starting switch. Immediately behind this, a strip displays the images from the rear view cameras: two located in the mirrors, the third, panoramic, in the rear capping.

Also made from Newspaper Wood, the console features a unique fuel indicator, shaped from blown-glass by a master craftsman. This fuel chamber, displays the level of fuel visible against finely chiselled indication marks. Also, diffused in the passenger compartment by its vents, the fragrance reproduces the essence of the materials used. Finally, the console houses the dual-zone air conditioning controls, with an aluminium bar with a milled detail finish.

Peugeot Onyx Concept, like its accomplished Peugeot Concept predecessors, exudes the skills of the talented engineers and designers, introducing new techniques and innovative materials to produce a stylish design with extreme performance that inspires excitement and desirability, while providing a glimpse of the theme of thinking with the future in mind.