The countdown is on in Brazil and soccer fans are gearing up for the biggest global sporting event of the year. Jerseys and flags are in huge demand but one question remains: what will be the car of choice for celebrating fans from mid June? MINI is sure to strike from outside the box with its homage to the beautiful game: the MINI Paceman GoalCooper.

This top international player is based on the MINI John Cooper Works Paceman, and is equipped with all it takes to make it from the group stages through to the final.  The MINI Design Team captained by Oliviero Weilinho combined the colours green, blue and yellow to come up with the exclusive Danielson multi-coloured exterior line, giving MINI an early 1:0 lead. 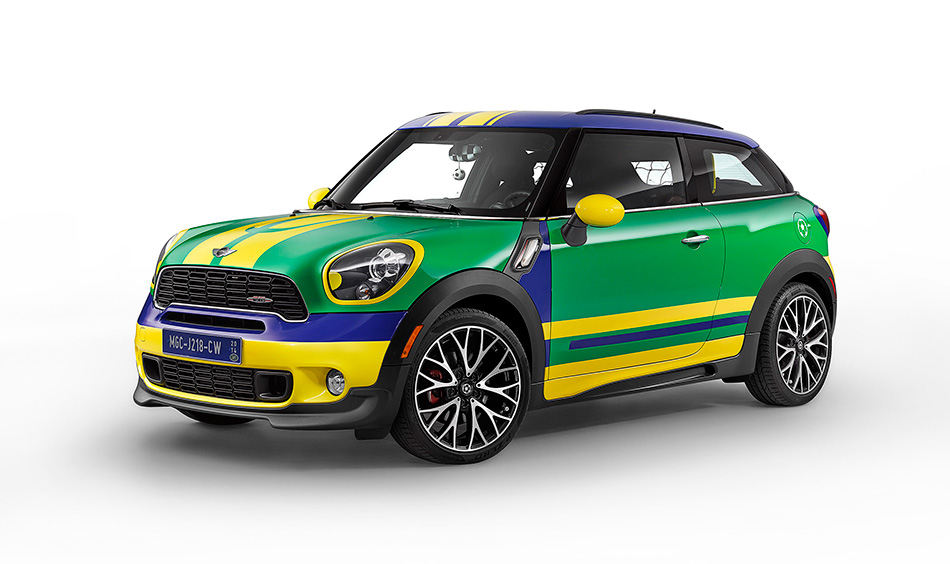 The interior kit is far from off-side, astro turf floor mats in Brasileiro Green and the "floodlights" in the shape of a MINI LED interior lighting package give a stadium like feel. With this equipment aboard the MINI Paceman GoalCooper will set off "Mexican waves" on all four seats.  It is match-fit when it comes to reliving controversial referee decisions and glorious goals via live web stream.  A universal holder for smartphones and a rear holder for the Apple iPad will ensure comfortable viewing on the rear seat terraces. For relieving pre-match tension or enjoying some half-time downtime the MINI Paceman GoalCooper features a miniature table football set mounted on the Center Rail.

The MINI Paceman GoalCooper is fully equipped for training between matches. The rear seatbacks can be folded over to turn the boot, which is fully clad in AstroTurf, into a football goal. The net is attached behind the front seats.  The MINI Paceman GoalCooper has a top defence line-up making it very difficult for any striker to score. As soon as the Park Distance Control (PDC) sensors, in conjunction with the interior monitoring sensors of the alarm system, register a shot on goal, the electric tailgate is operated, instantly closing the tailgate, reflecting the ball and keeping the box clean.

If a player successfully puts one past the ‘keeper', he can share his success immediately with other MINI drivers.  When the final whistle has been blown after 90 minutes the score is transmitted to the iPad in the MINI via a special MINI Paceman GoalCooper MINI Connected App. Thanks to intelligent connectivity the results can be compared online with other registered users at any time. The table is updated every day and at the end of the tournament the MINI Community World Champion will lift the trophy.

The new star of the MINI Team will be officially presented on 1 April 2014. All details regarding transfer fees and contract periods will remain strictly confidential until then.