Back in 1974, five-cylinder diesel engines were nothing new – they were used in trucks and stationary applications. Their introduction in passenger cars, however, hit the headlines. With this engine, Mercedes-Benz reacted to the performance limit reached with four-cylinder passenger car engines: restricted space conditions in the engine compartment did not allow any more horsepower to be squeezed out of the maximum displacement. A six-cylinder (tested by Mercedes-Benz) would have been too long, too heavy and too expensive, and five cylinders appeared to be the best compromise. And so, the engineers developed the OM 617 five-cylinder in-line engine on the basis of the tried-and-tested 2.4 liter unit. 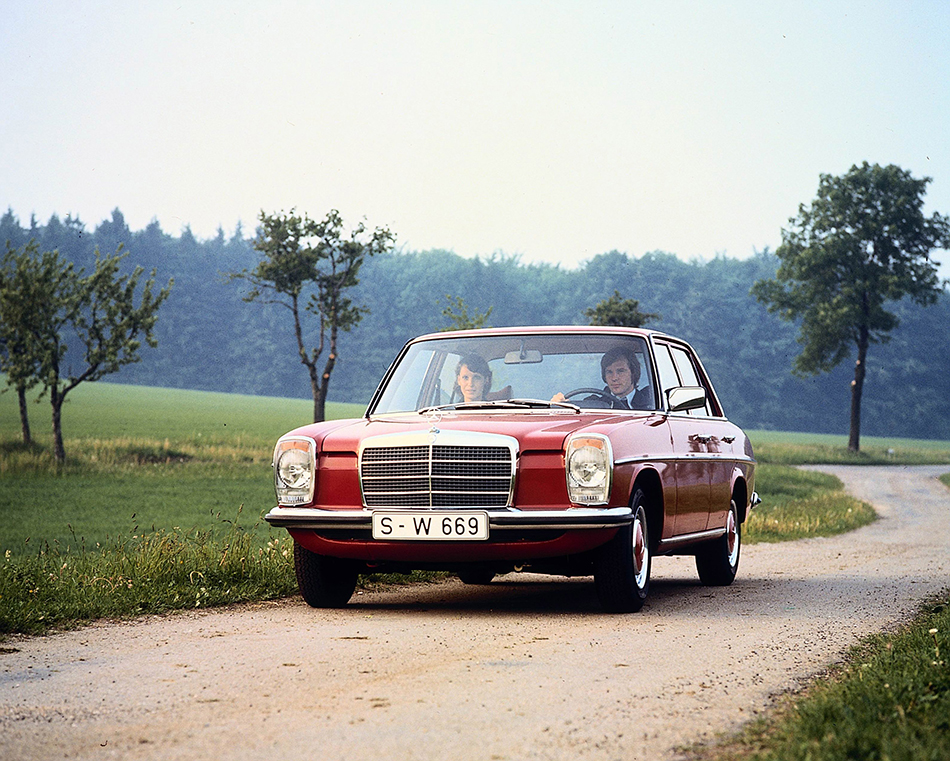 The proven features of the 2.4 liter engine were retained, but the five-cylinder was given a new Bosch injection pump which was connected to the engine's oil circuit by means of oil ducts and was therefore maintenance-free. A mechanical governor replaced the pneumatic governor customarily used in the smaller diesel models. This enhanced ride comfort: in the 240 D 3.0 with manual transmission, load changes were hardly noticeable, and with automatic transmission, gear-changes in the part-load range were much smoother.

A pneumatic instead of the 2.4 liter engine's mechanical shut-off unit was used, meaning that the new engine could be switched off by means of the ignition key. The engine of the 240 D 3.0 was also started by turning the ignition key and not, as before, by pulling a lever – another comfort-enhancing development. What was an all-out novelty at the time is a matter of course in present-day diesel-engined cars: turning the ignition key into drive position initiates the pre-glowing process, and a control light in the instrument cluster comes on. Once this goes out again, the engine can be switched on by means of the key.

The new engine accelerated the car from standstill to 100 km/h in 19.9 seconds and gave it a top speed of 148 km/h (with automatic transmission: 20.8 seconds / 143 km/h). At the time of its launch, the 240 D 3.0 was thus the diesel passenger car with the world's most dynamic acceleration and highest speed. A press release prophesied that "its refinement, smooth-running characteristics and economic efficiency (10.8 liters of diesel on 100 kilometers) will attract a new, large group of customers to the latest Mercedes diesel." As a consequence, the car prepared the ground for the success the diesel engine enjoys today. And here's another prophetic comment from the press release: "Driving diesel-engined cars has become even more attractive with the 240 D 3.0."

Mercedes-Benz used the five-cylinder diesel in other vehicles as well, for instance in light vans and, from 1978, in the 300 SD S-Class (W 116 series) for export to America; in that car, the engine with exhaust gas turbocharger developed 111 hp (82 kW) at 4200/min.

The C 111-IID experimental car caused a sensation. For testing the high-performance diesel engine, it was equipped with turbocharger and intercooler and developed 190 hp in this sports car. On the test track in Nardo/Italy, the C 111-IID put in a convincing performance by reaching spectacular speeds in June 1976. Four drivers established a total of 16 world records in 60 hours – 13 of these applied to diesel-engined vehicles and three to motor vehicles in general, irrespective of the type of engine. The average speed in this dynamic test was 252 km/h – and Mercedes-Benz proved that the diesel also has sprinter qualities.