The larger, more powerful 2005 Nissan Frontier pickup, which is offered in both King Cab and Crew Cab body configurations, has more than a passing resemblance to the recently introduced Nissan Titan full-size pickup. Along with its modern, rugged styling, the all-new Frontier – which goes on sale at Nissan dealers nationwide in winter 2004 – shares a number of significant features with Titan, including its rugged suspension design, innovative spray-in bedliner, Utili-track™ bed channel tie-down system and fully boxed, all-steel frame based on the Titan platform.

"The award-winning Titan sets the standard for innovation in pickup design, regardless of size – which, in turn, set the tone for the creation of the 2005 Frontier," said Mark McNabb, vice president and general manager, Nissan Division, Nissan North America, Inc. "With the debut of the all-new Frontier, we're solidifying Nissan's truck presence in both the full-size and compact truck segments – essentially giving buyers the same tough truck in large and extra large."

The 2005 Frontier will be offered in both King Cab and Crew Cab body styles and in 4x2 and 4x4 driveline configurations. The new Frontier, like the previous generations, will be assembled at Nissan's manufacturing facility in Smyrna, Tennessee. 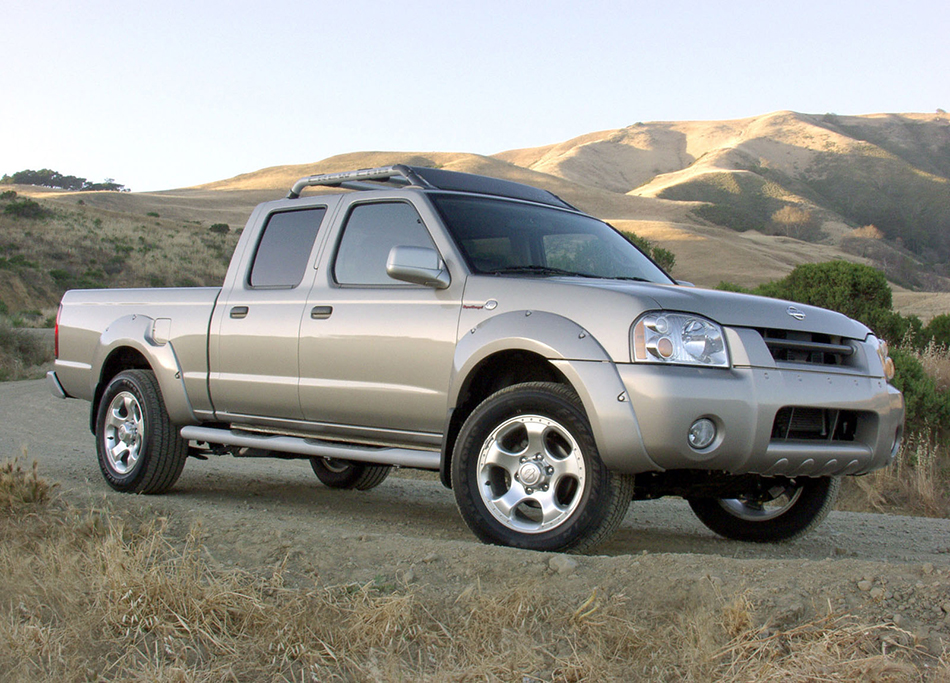 While the key word in conceiving the 2005 Frontier was "more" – as in more power, more size, more off-road capability, more towing and cargo hauling capacity, more comfort and utility – the key to bringing concept to reality was the adoption of the Titan's all-new "F-Alpha" platform.

Starting with strong, fully boxed frame rails, the new "F-Alpha" platform provides a rugged foundation on which to build. The 2005 Frontier's wheelbase is 9.8 inches longer than the current Frontier, which helps enhance ride comfort and stability. The overall length of 205.5 inches is larger than the current model (+2.6 inches King Cab, + 5.6 inches Crew Cab), though it remains a perfect "activity size" for buyers who don't need a true full-size pickup. Width and height measurements are also increased with the new design.

The Frontier, like Titan, is also expected to provide exceptional acceleration, towing capacity and all-around off-roading ability, due in large measure to its powerful new engine – a 4.0-liter DOHC V6 producing 250-plus horsepower and 270-plus lb-ft of torque (final figures will be announced closer to production). These figures represent increases of 70 horsepower and 68 lb-ft of torque over those of the current normally aspirated 3.3-liter V6-equipped Frontier.

The new 4.0-liter V6, based on the award-winning Nissan VQ engine series used in the 350Z, Maxima, Altima, Murano and Quest, is specifically tuned for the unique demands of truck use, while at the same time offering excellent fuel efficiency and smooth operation.

A 2.5-liter DOHC inline 4-cylinder engine will also be available on the base Frontier King Cab model.

The new Frontier will be offered with a choice of transmissions – an advanced 5-speed automatic or a 6-speed manual transmission. Frontier 4x4 models include a shift-on-the-fly 4-wheel drive system with 2WD/4H/4LO modes operated by an electronically controlled part-time transfer case. In addition, a new advanced off-road traction system will be available with 4x4 models, along with performance gas shocks and alloy wheels with off-road performance tires. Overall off-road capability has been substantially enhanced in virtually every aspect.

The Frontier is offered with a range of available wheels and tires, including 17-inch wheels with 265/65R17 tires.

The Frontier's maximum towing capacity is rated at more than 5,500-plus pounds.

"With increases in all critical exterior and interior dimensions, it is easy to see that with this generation Frontier has grown up," said McNabb. "The new Frontier also projects a more modern, rugged truck look and feel, both inside and out, with a robust, athletic style and intelligent-utility design features."

Like Titan, the 2005 Frontier offers new levels of innovation in areas where it matters most to truck owners, including the bed. Both the Frontier King Cab and Crew Cab models offer an available high-utility bed that includes a factory-applied spray-in bedliner and the new Utili-track tie-down system first introduced on Titan.

The Utili-track system provides ultimate cargo hauling flexibility through the use of five special "C" cross-section rails mounted in the bed (two channels in the bed floor, and one each on the bed side rails and the bed header panel). Removable utility cleats slide into the channels, providing a wide range of attaching points for securing cargo. In addition to the tie-down cleats, a full range of accessories will be offered for use with the channel system, including bed dividers, sliding cargo trays, modular storage units and bike racks.

"The interior of the new Frontier, again following the high design standards set by the Titan, serves as a catalyst for active lives. It is both purpose-built and no-nonsense, yet at the same time offers the innovative, intuitive functionality and comfort that has been missing in the segment," said McNabb.