Huey Lewis once sang "It's hip to be square." Few believed him. Mathletes wax poetic about the superior geometric efficiencies of a cube in terms of volume v. surface area. And get little respect. Cavemen discovered that a round stone rolls better than a square one. And, as a consequence, gave birth to the traffic jam. In 1998, Nissan introduced the original cube, an aptly named box-on-wheels, to minor consumer interest. Perhaps, like homo erectus, the cube was simply ahead of its time.

But times change, and so did the cube. In 2002, an all-new second generation Nissan cube was introduced in the Japanese market. More spacious inside, more glass outside, more power under the hood and, more importantly, a few more angles and curved surface details added to its compact, slab-sided exterior. Quintessentially Japanese, this new cube took Tokyo by storm. A pocket-sized fun-and-function cocktail mixing the charm of Godzilla and the wit of Mothra, buyers were smitten. And so, it turns out, Huey was right after all.

Like the Nissan GT-R before it, the Nissan cube soon found an audience outside of Japan – not in person, but through its exposure in fashion and automotive magazines, videos and on the Web. 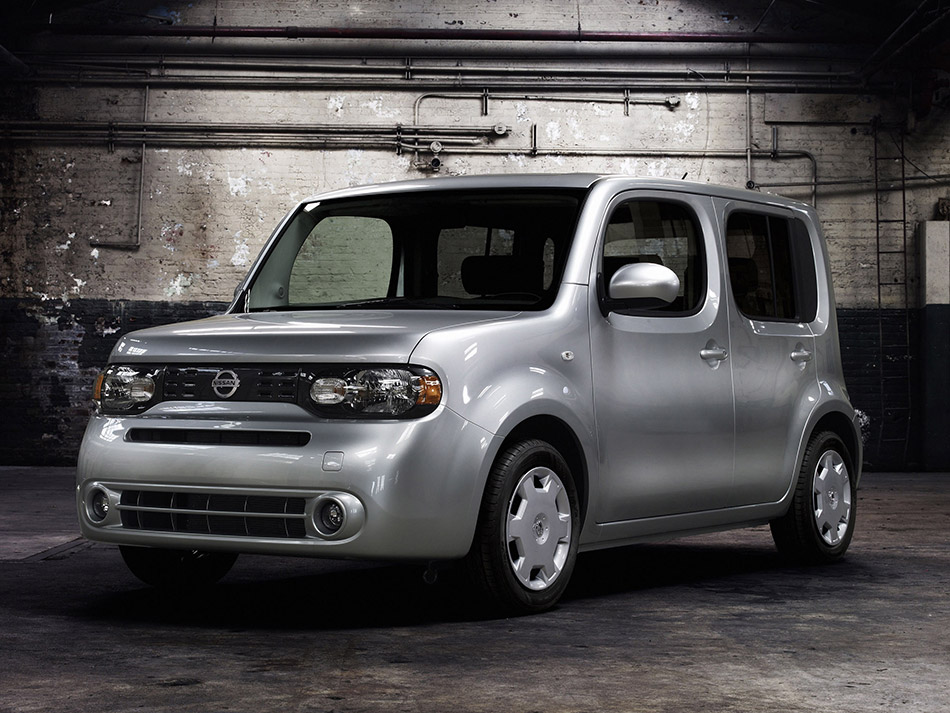 Reboot to today, more than 10 years since its original appearance, and the Nissan cube is ready to meet the world in person, coming to America in spring 2009 in an all-new, dramatically rethought third generation design that is clever, quirky, witty, fun and uniquely functional. And still totally square.

More than just unique geometry, however, the new 2009 Nissan cube is also conceived as a totally different take on an automobile – a car that doesn't want to be defined as car. "With its unique blend of fashion and function, cube imagines a life less ordinary," said Al Castignetti, vice president and general manager, Nissan Division, Nissan North America, Inc. (NNA). "Cube is as much of a Mobile Device as it is an automobile, something that enhances life like people's digital devices do. Cube is a vehicle that people of all ages can fall in love with, even when they don't love cars."

Though its uniquely styled, asymmetrical body makes a standout statement against the backdrop of today's look-alike entry-level vehicles, cube presents a range of strong rational arguments for purchase as well.

"The new Nissan cube is not, by any measure, a pure ‘youth car,' though it especially meets the needs of young adults' lives in the sense that it is social, expressive and practical," said Castignetti. "And like many entry-level vehicles, cube will be purchased by young consumers with the help or influence of their parents. We believe the combination of value, fuel economy and safety will be especially reassuring to parents involved in such decisions."

A "Bulldog in Sunglasses"

The all-new 2009 Nissan cube builds on the previous generation cube's non-traditional design with an improved stance and an added sense of dynamic movement. With cube's long wheelbase relative to its overall length (a 99.6-inch wheelbase against a 156.7-inch overall length) and wide track, the wheels, in effect, are pushed out to each corner – providing exceptional space utilization and a confident-looking stance that has been compared to a "bulldog in sunglasses."

"The designers, engineers and planners' effort and passion in creating the next generation cube was unheard of – perhaps only exceeded in recent memory by that of the Nissan GT-R development team," said Castignetti. "They were constantly drawing, cartooning, adding thoughts and ideas, which is how the image of the bulldog emerged and evolved. This was not a traditional development process."

Along with its stance, the "incognito canine" look is aided by the wide headlights and grille treatment, the small but substantial body proportions and the short "tail" section. In the rear, the bar-type taillights reinforce the wide, anchored feel. The cube's creators also sought to maintain a sense of "pure design," reducing the number of character lines to give simplicity and freshness to the styling.

Another unique aspect of the cube's exterior is the greenhouse. The A-pillars are positioned far outward and relatively upright, giving a wider range of forward visibility. The front door windows utilize a "photo frame" design patterned after a personal photo frame, while the asymmetrical wraparound side/rear window creates enhanced rear diagonal visibility for lane changes and reverse parking.

"The ‘geometric circle shape in the square' rear window is cube's signature," said Castignetti. "Though there are D-pillars on both sides of the cube, the visual effect of the narrower passenger-side pillar is quite remarkable in the overall appearance, a look aided by the asymmetrical back door."

Unlike typical top-hinged or clamshell-style utility rear doors, cube features an easy-access refrigerator-style opening, which makes it possible to open or close it even if parked tight against other cars in parallel parking spaces or when backed in against a wall or other obstacle.

The back door opens fully when space allows for loading groceries, luggage or large-sized objects – or to a limited-access position (about eight inches) when space is restricted for retrieving or loading a backpack or other small objects. The one-hand door handle operation is designed for easy use, even while carrying things in the other hand or arm.

The centerpiece of the new cube's universal appeal is its "social space" – the surprisingly roomy interior that offers room for five in a lounge-like comfort. "Cube is not wasteful in terms of its footprint, carbon or physical. It creates a third space, in addition to home and school, for interacting with friends. It's a space that is highly changeable and adaptable to owners' evolving lives, with plenty of room for personalization," said Castignetti.

Cube's clever, inspired and surprisingly open occupant space was conceived with a "Jacuzzi Curve" layout and "floating meter pod" driver's area. It combines "casual lounge"-style passenger seating with a relaxed driving experience. The interactive interior is anchored by its curve-themed architecture, such as the subtle wavy shaping of the instrument panel, door panels, seat shapes, armrests and the iconic circular/oval shapes of elements ranging from air conditioning vents, door pulls and climate controls.

"In some ways, the cube is like the big cardboard appliance boxes you used to play in as a kid – they could be clubhouses, race cars, forts, whatever your mood and imagination wanted at the time," said Castignetti. "The new cube's interior leaves room for imagination and personalization, yet also starts with a solid functional purpose." Cube's stress-free driving experience is the result of a number of factors: an extremely tight 33.4-foot curb-to-curb turning radius, a tall seating position made possible by the tall body height, an extremely short hood "invisible length" (the area of the hood panel that the driver is unable to see) and the good rear visibility for parking and backing up.

"Our studies show that one of the most stressful aspects for young or inexperienced drivers is parking, particularly parallel parking," said Castignetti. "Cube is extremely adaptable to parking environments in terms of its compact exterior dimensions, good visibility and easy steering."

Other interior features include the "floating pod" instrument panel with asymmetrical light blue and white gauges, which are designed to make it easier to distinguish between the speedometer and the tachometer. The gauge needles "sweep" when the engine is started to add a sense of flair, while the gradation effect gives a natural ambience similar to the glow of the white moon and the blue earth. Sub-gauges are concentrated for enhanced visibility. The three-spoke steering wheel is available with leather wrapping and steering wheel-mounted audio controls.

Convenient storage spaces and cup/bottle holders are abundant throughout the cube interior – including six cupholders (instrument panel, front center console and rear armrests) and five bottle holders (door panels and center console). There are also detachable multi-hooks for holding bags or hats, which can be moved from place to place – including the instrument panel and rear passenger doors.

The "shelf expression" concept features two "shelves" located on top center and passenger side of the instrument panel. Not designed for holding objects when the cube is in motion, they provide convenient spaces for placing keys, cell phones or digital music players when the vehicle is parked. Cube's "Front Door Bungees," another clever cube accessory item, are colorful rubber straps (red, yellow, orange or gray) that slip into cutouts on the door armrests to secure items such as maps, nametags, photos, towels or small stuffed animals.

"The interior concept is really about the cube conforming to the users' needs, rather than the other way around – you can put your favorite items anywhere you want, not where the vehicle tells you to," said Castignetti. "The designers demanded that every aspect of the cube interior be delightful, as well as functional."

The cube interior design also incorporates a series of subtle "Water Drop" concentric circles, inspired by nature and the calming way that ripples move outward from a drop in water. The circles can be seen in items ranging from the roof headliner to the cupholders to the climate control design.

A Wide Range of Available Features

"The cube interior is a great example of how an inexpensive, high value vehicle can be done well – quality design, quality materials and the features and equipment that the user needs with room for personalization, rather than forced customization," said Castignetti.

Just as cube has its own unique take on styling and interior design, the engineering team took a fresh approach to performance – creating a vehicle that is easy to drive and easy to handle in traffic.

The MR18DE engine, also utilized in the popular Nissan Versa, is designed to be powerful and responsive, while also delivering excellent fuel economy. Fuel economy is projected to be 30 miles per gallon Highway (actual EPA fuel economy unavailable at this time).

The Xtronic CVT, unlike conventional stepped gear automatics, operates as essentially "one gear" through use of a belt and two pulleys. By infinitely varying the working diameters of the two pulleys, the transmission eliminates the "steps" between gears, resulting in a smoother, more efficient operation by keeping the engine in its optimum power range under a variety of driving and load conditions.

"The cube has a strong power-to-weight ratio, which combined with the advanced CVT, gives it a surprisingly spirited driving feel. Throw in the small turning radius, good outward visibility and the smooth suspension feel and you have the perfect formula for navigating through traffic with confidence and ease," said Castignetti.

The cube 1.8 Kr!m was developed by Nissan North America's Specialty Vehicle team, a recently formed group responsible for the customization and conversion of future Nissan models, including NISMO and Kr!m executions. Kr!m model executions will convey bold, intriguing style while offering the convenience and assurance of a full factory warranty.

The 2009 Nissan cube goes on sale in early May at Nissan dealers nationwide.

Three Accessory Packages are also available, which combine a number of popular features: the Interior Designer Package, Interior Illumination Package and the Ginormous Package with both exterior and interior personalization parts and equipment.

"We know that self-expression is important to many potential cube buyers, so we've provided the canvas and accessories to help with personalization," said Castignetti. "With an abundance of personality right off the assembly line, cube allows buyers to add a few accessories, many accessories or none at all and still make a strong personal statement."