The Nissan Qazana made its first ever appearance at the 2009 Geneva Motor Show. Inspired by a simple desire to have fun behind the wheel, Qazana shows that mind-numbing motoring could be a thing of the past.

Officially it's a showcar, a study into how a small car of the future could look. But with the announcement that a small crossover - a baby brother to Qashqai - will be built at the company's Sunderland factory in the UK, Qazana's significance should not be underestimated.

"The Qazana concept is an intelligent, all-wheel drive crossover which is masculine, agile, lean, and designed for the tough city streets. Our team at Nissan Design Europe in London realised this image with the motif of a modern day beach buggy and four-seat motor-bike," explains Atsushi Maeda, Studio Chief Designer, Nissan Design Europe.

According to Matt Weaver, project lead designer at NDE, Qazana was designed to be sophisticated but fun. "It's a hugely optimistic car, which is no bad thing in these difficult times. Had it been created in the 1960s, it would have counted camper vans, bikes and buggies as its rivals. Infused with that same spirit, there's nothing quite like it available today." 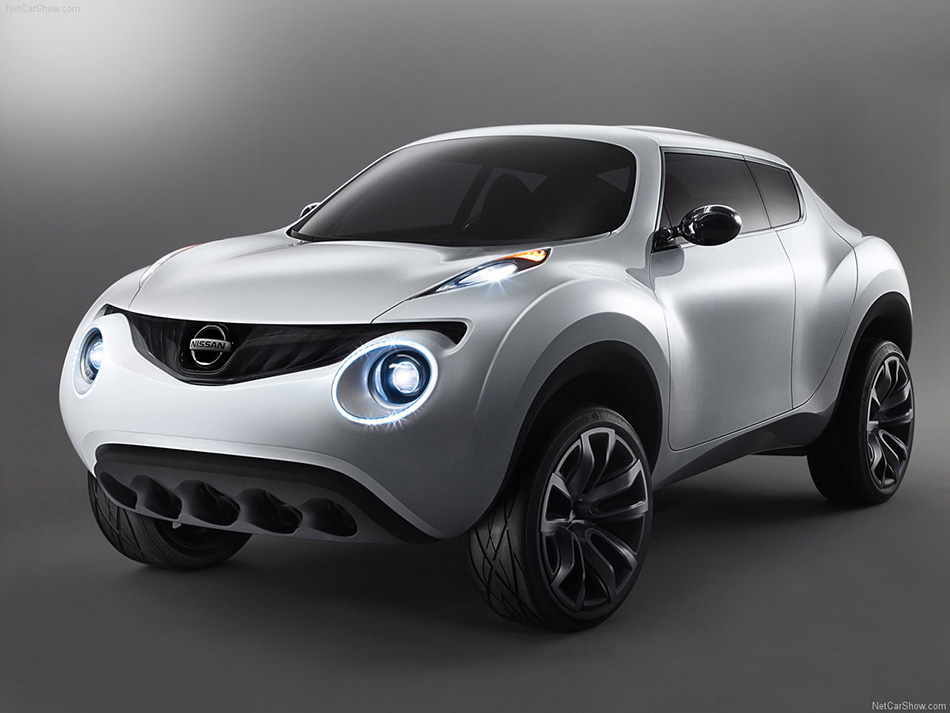 In the same way that Nissan re-wrote the rule-book when it introduced Qashqai two years ago, so Qazana is ready to do it again. By approaching the small car market from a totally different direction, Qazana invigorates, stimulates and rejuvenates the traditional town runabout.

Compact overall dimensions (4060mm in length, 1570mm tall, 1780 wide and a wheelbase of 2530mm) mean Qazana would be ideally suited to the urban environment. Yet its advanced specification and energetic styling suggest an ability that goes far beyond the city walls.

By mixing SUV and sports car styling cues, NDE's design team has created a highly individual Crossover quite unlike anything else on the road. The tall stance, truncated rear styling and short front and rear overhangs underscore its feeling of robustness and strength, but the low roof line, assertive side window graphic and broad shoulders hint at a sporting ability absent in traditional all-wheel drives.

At the same time, rounded elements - notably the wheel arches and bonnet - evoke a friendly ambiance and provide a link with existing Nissan Crossovers. Indeed, Qazana has the signature Crossover design detail in the rising window line at the rear, also found on Murano and Qashqai.

Says Weaver: "Qazana follows in Qashqai's wheel tracks by challenging convention. Externally Qazana adds a number of existing Nissan design cues - including a variation on the 'boomerang' rear light theme from 370Z - to a highly distinctive shape that's unlike anything else in the company's current design portfolio."

The profile is dominated by the prominent wheel arches and by the body's high waistline, which combine to give an impression of strength and which contrast vividly with the slim side windows. Echoing a style first seen on Mixim, Nissan's high performance electric coupé concept shown at the 2007 Frankfurt Show, the glasshouse resembles a crash helmet visor.

Although it appears at first glance to be a two-door coupé, Qazana has a further pair of rear-hinged half doors to ease access to the rear compartment. All the doors are electrically operated and for safety reasons the rear pair can only be activated once the fronts have been opened. With no conventional B-pillar, access to the interior couldn't be easier.

One notable feature of the roof-line is the virtually straight cant rail above the doors which adds further to the strength of the profile. The roof itself has a pair of thin glass inserts running the full length of the roof which allow slithers of natural light into the cabin.

This contrast between sporty performance and all-terrain potential is underlined by the Venturi-style skid plate at the rear of the vehicle, Qazana's extended ground clearance and the soft rubber spats which edge the wheel arches and help to disguise the vehicle's long suspension travel. The graphite coloured spats contrast vividly with the bold exterior colour, a unique shade called White Titanium, and the strikingly styled 20 inch black chrome alloy wheels.

The car's face is dominated by four headlamps. Two lower circular lamps set within the bumper contrast with a pair of daylight running strips mounted high on the wings on either side of the bonnet: the look is of a rally car preparing for a night stage.

While the full width grille, dominated by Nissan's centrally mounted badge, is an interpretation of current Nissan styling, its construction is not. A one-piece acrylic moulding, no cooling air can pass through the grille. Instead, the lower portion of the bumper, finished in a contrasting graphite colour, is dominated by a number of large holes for air to reach the radiator. See-through acrylic mouldings are also used for the door mirrors.

The interior has been designed as an extension of the exterior thanks to a clever interplay between hard and soft materials. Rather than being completely enveloped in leather for example, elements of the lightweight carbon fibre seat structure are on permanent view, appearing to have 'broken through' the covering. The centre portion of the backrests features a mesh material, allowing fresh air to circulate around the occupants.

Like the seats, the metal sections of the centre console seem to have forced their way through the leather covering while the internal door-frame is part exposed so that the door pull appears to be hewn from solid metal.

Adding further to the mechanical feel of the interior, the shape of the centre console and armrest has been inspired by the fuel tank and seat of a sports motocycle. Paul Ray, senior interior designer at NDE, is a keen rider. "I enjoy the sensation of being at one with my bike and wanted to capture that feeling in Qazana," he says.

"The way the structure appears through the fabric of the interior also reflects motorcycle design and construction."

Accentuating the practical side of the car, Qazana has 'floating' seats centrally mounted over a one-piece rubberised floor covering, creating an openness in the cockpit. Grooves cut in the flooring are replicated on the seats themselves.

The dashboard is dominated by a centrally mounted screen. As well as doubling as a navigation display, it will deliver vital information relating to Nissan's next generation fully electronic ALL MODE four-wheel drive with torque vectoring system and other advanced technical processes found on board, including integrated communications systems. Using an intuitive touch-screen interface, the driver will be able to adjust the air-conditioning and other key vehicle settings.