For this year's Los Angeles Auto Show Volkswagen has produced a Beetle Study that's aimed directly at the needs of sport-oriented people. It's name tells you where it's most at home: Dune. With all four wheels driven by a high-torque V5 engine, this particular New Beetle will take you on after the road has come to an end for the conventional on-road automobile.

The variable roof is a sure way of identifying the Dune. Light passes through the plastic material and creates a warm yellow glow under the soft top - a sense of sailing in the sun. And with the roof open, the Dune gives you a very special kind of open-air feeling.

The basic New Beetle shape has been retained ? what better starting point could one have? At the front, the radiator grille also acts as an underride guard and is something the standard model doesn't have. It's made of aluminum and serves as a particularly strong front bumper. The matching center section of the bumper at the back is also made of aluminum. 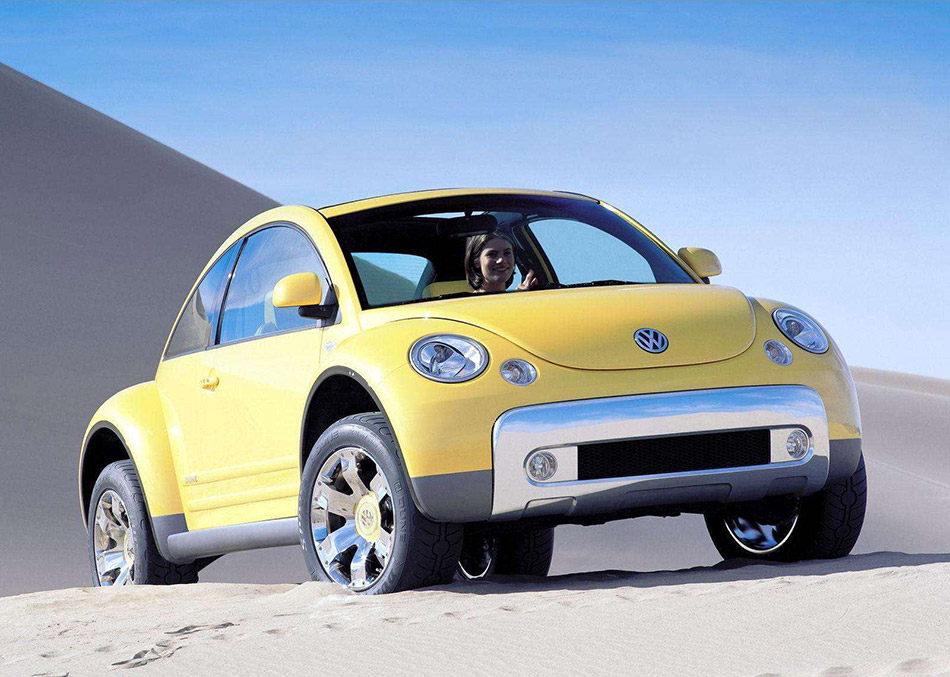 See the Dune from the side and you can't help admiring the six-spoke, 18-inch alloy wheels with their special size235/60 R 18 tires.

The trunk has a whole series of talents as well as its strength and good looks. The entire load surface is lined with aluminum.

The designers have applied aluminum sheet to the backs of the individual rear seats as well. Fold them over and you get an even larger, uninterrupted load platform.

Many features of the concept study's instruments differ from the production car. Take the new central instrument for example. Where in the standard New Beetle a single circular dial provides the main information, there are three in this unit. In the center the instrument cluster is dominated by a new navigation system. It's a compass of above-average intelligence that will certainly tell you the way back to civilization if you should get lost for some reason. Two more displays indicate the tilt and roll angles reached by the body.

The concept car is powered by a 2.3-liter V5 engine and drives all four wheels by the well-known 4Motion system, through a six-speed manual-shift gearbox.

Variable-height air suspension means that the Dune's driver can match the ride height to all kinds of terrain. The suspension has three pre-programmed height settings and a total adjustment range of 120 millimeters.