Forty years ago, in October 1969, the Datsun 240Z arrived in North America, heralding a new era in sports car design. The new import from Japan was a revelation – offering the performance of a Porsche, the looks of a Jaguar and the price and reliability of, well, a Nissan. It was an affordable sports car that could be driven every day and was accessible to anyone with the $3,626 base price.

And though the price of a new Z® might have changed a little in the past 40 years, its unmatched value, style, performance and segment leadership remains stronger than ever. To celebrate, Nissan has created a special, limited production version of the 2010 Nissan 370Z Coupe, the 370Z 40th Anniversary Edition. It will be available at select Nissan dealers nationwide beginning in spring 2010. 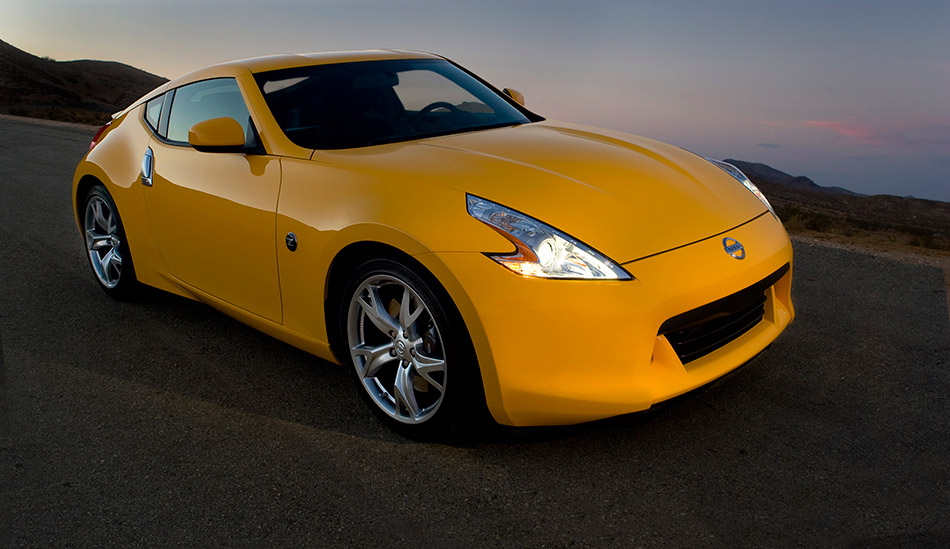 Other changes for the 2010 model year 370Z Coupe are minimal. Following the total redesign of the iconic Z® for the 2009 model year, the enhancements include revised Navigation Package contents, the addition of heated mirrors and in-cabin microfilter and one new exterior color, Black Cherry.

"With the introduction of the totally new 370Z last year, Z® solidified its position as one of the most desirable sports cars on the planet at any price – as it has for the previous four decades," said Al Castignetti, vice president and general manager, Nissan Division, Nissan North America, Inc. "Just as the original 240Z design still looks remarkably fresh today, we think this current generation 370Z is also destined to endure for many years to come."

In addition to the 2010 Nissan 370Z Coupe, an open-air 370Z Roadster and 350-horsepower NISMO 370Z are also available as (full information on both models available separately – see Nissannews.com).

A Sculptural Yet Functional Exterior Design

The 2010 370Z's dynamic styling offers dual benefits – an aggressive appearance and a light, highly rigid structure for enhanced performance. The 370Z Coupe's wheelbase is nearly four inches shorter than the previous generation Z® (100.4 inches versus 104.3 inches), accomplished by moving the rear wheels forward in the 2nd generation FM platform, while overall length is reduced by 2.7 inches (167.1 inches versus 169.8 inches). At the same time, the overall width been increased by 1.3 inches, the rear track by 2.2 inches and overall height reduced by 0.3 inches, giving the 370Z a much more aggressive stance.

The Z® features aluminum door panels, along with an all-aluminum hood (the previous aluminum hood design utilized steel reinforcements) and an aluminum hatch. At the same time, the body structure was extensively revised for this generation design, improving front body torsion rigidity by 30 percent; a new front suspension cradle to reduce front body lateral bending; new rear structural reinforcements; and an underbody "V-bar" to help reduce rear lateral bending. Other enhancements include the use of a carbon fiber composite radiator housing and strengthening of the rear fender and hatch areas.

The 370Z taut exterior design incorporates intentional 240Z styling cues, a sleek aerodynamic shape, a "dynamic motion" feel with a dramatic cantilevered roof and a "low visual gravity." The coefficient of drag is 0.30 (0.29 with the Sport Package), the same as the previous generation 350Z Coupe. The 370Z also maintains the previous generation's zero front lift and zero rear lift when equipped with the rear spoiler, thanks to extensive aerodynamics efforts – including an "inverse area" front bumper design which smoothes the flow of air to the sides of the vehicle, while the rear design maximizes the control of air flow from the roof to the rear hatch. In addition, the front overhang was extended 1.2 inches and more than 200 rear quarter panel patterns were made and wind tunnel tested to counter the negative aerodynamic effects of shortening the wheelbase (versus the 350Z).

One of the most distinctive features of the bold exterior design is the headlight/taillight treatment, which features a fierce "boomerang" shape. High Intensity Discharge (HID) bi-functional xenon headlights with auto on/off feature are standard.

The hood's deep character lines continue over the windshield into the cantilevered roof design. The intense broad-shouldered rear shape is highlighted by the integration of the boomerang taillights and wide, flared rear fenders.

The 370Z's sleek silhouette is defined by its upswept quarter window design that is echoed by the dynamic upward curvature in the lower rocker panel and the sense of the taut sheet metal molding itself around the wheels and frame. Attention to detail and functionality is evident throughout the exterior design, including the addition of a flashing (repeater lamp) side marker lamp/emblem.

A Cockpit Equipped To Make Car and Driver Feel Like One

The interior design of the 2010 370Z Coupe continues the Z® tradition of enhancing driving pleasure, no matter what the road or traffic conditions offer. The traditional 2-seat layout is built around a deeply scooped instrument panel with a full-length center console separating the driver and passenger's seat. In the rear is an open cargo area with enhanced storage and accessibility. The design focus incorporates a "layer concept," with an information layer, an operation layer and a holding layer.

The information layer provides enhanced visibility with easy access to all key data. The gauges are once again attached to the steering column, so the driver doesn't have to choose between the perfect steering wheel position and visibility of the gauges. The large upper steering wheel opening in front of the gauges is designed to provide a good view of the readouts. Gauge size was increased over the previous generation design, including a 15 percent increase in the tachometer, and the gauge angle was adjusted for improved readability.

The instrument panel retains the traditional 3-pod cluster with oil temperature, voltmeter and clock, while the speedometer and tachometer include an "initial sweep" function, coming alive when the Z® is first started.

The operation layer includes the steering wheel, shifter and switchgear. The steering wheel is an "oval" 3-spoke design, which offers baseball-style stitching and large thumb grips and palm rest areas for improved feel on long drives. The surface of the leather-wrapped wheel is "shaved" to provide a more kidney-like shape to better fit in the hand. The shifter was also redesigned versus the previous generation, with the manual transmission shifter padded in different areas to improve the accuracy of diagonal shifts and to feel softer in the hand for forward and backward motions.

The holding layer includes the seats, knee pads and door trim support. The driver's seat is uniquely different from the passenger's seat, with lower seat cushion cut-outs on the sides where the thighs rest – allowing the driver to push on the pedals without the seat fighting them. The seat also features an improved frame that helps it to better hold the driver in place during cornering.

The door armrests have been designed to provide extra support when cornering and the kneepads are better integrated to help the driver maintain the proper position while cornering.

In addition, the available aluminum-trimmed pedals utilize rubber insert material to improve grip. The accelerator pedal is floor-mounted (versus hanging) to provide better contact with the foot, less effort to operate and easier pedal-to-pedal foot/heel movement. The brake pedal is a variable ratio design with enhanced rigidity and easy operation.

Interior packaging is also enhanced from the previous generation, including the removal of the rear strut brace (replaced with less intrusive structural reinforcements) and by adding a new "shelf" area behind the seats, creating an ideal area for storing briefcases. A retractable cover is standard on the 370Z Touring model. 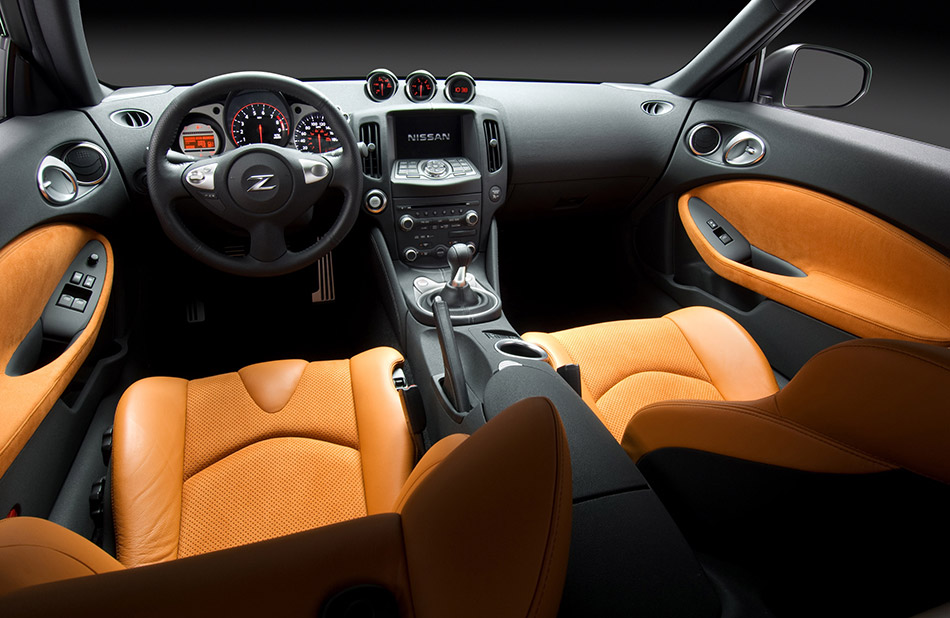 Taking Performance To A New Level

Many aspects of a sports car's performance come down to the simple formulation of power-to-weight. The 370Z represents a major achievement on both sides of the equation versus the previous generation 350Z – with a net weight reduction of 95 pounds (Nissan 370Z versus the comparable 350Z Enthusiast model) and a power increase of 26 horsepower. In addition, the center of gravity was lowered through use of a lower engine positioning (-0.6 inches) and lower driver hip point (-0.4 inches). Rotating mass was reduced with a shorter carbon-fiber composite driveshaft.

Key to the enhanced performance is the VVEL system, which is able to optimize intake valve open/close movements, allowing the needed air to be sent promptly to the combustion chamber at the precisely optimized time. Since the VVEL system can adjust to open the valves slightly, it improves fuel efficiency by reducing camshaft friction and fuel waste. It also provides cleaner emissions by allowing for quicker warm-up of the catalyst and by stabilizing combustion when the engine is cool.

The engine is backed by a choice of two advanced transmissions, both designed to improve driver performance. The close-ratio 6-speed manual includes an available synchronized downshift rev matching system, which allows drivers of any skill level to experience professional-like gear shift performance. The SynchroRev Match™ function automatically controls and adjusts engine speed when shifting to the exact speed of the next gear position, essentially "blipping" the throttle to smooth out any up/down shifts. This not only allows the driver to focus more on braking and steering, it improves vehicle balance and smoothness by reducing the typical "shock" when the clutch is engaged. The system can be deactivated with a button next to the shifter for drivers who prefer less vehicle intervention. The SynchroRev Match™ system is offered as part of the optional Sport Package.

Overall shift feeling has also been improved, with reduced vibration and noise (accomplished through improved lubrication) and a modification to the lever angle of the short-throw shifter.

The 370Z's 7-speed automatic with Downshift Rev Matching (DRM) and Adaptive Shift Control (ASC) is designed to offer quick, manual-like shifting when operated in manual mode with a target time of 0.5 seconds between shifts. Drivers can use the standard paddle shifters or the shift lever. With optimized torque converter lock-up logic, the new 7-speed automatic feels more direct, like a manual transmission. The 7-speed's wide gear ratios offer improved fuel efficiency (versus the previous 5-speed), while the Adaptive Shift Control is designed to adjust to the driver's driving style.

Fuel economy is rated at 18 mpg City/26mpg Highway for both the 7-speed automatic and 6-speed manual transmissions.

The previous generation Z®'s suspension has also been rethought to reduce weight, improve strength and improve camber change and lateral displacement. The double-wishbone front suspension (replacing the lower multi-link setup in the 350Z) uses lighter forged aluminum arms and a lightweight rigid aluminum-alloy cradle, along with a lighter stabilizer bar with a 35 percent improved lever ratio.

The 4-link rear suspension is also stiffer and lighter, with the rear cradle entirely integrated into a single part (no welding). "High response" shock absorbers are utilized on each corner, with ride comfort improved through reduced shock friction.

Steering is provided by a vehicle-speed-sensitive power-assisted rack-and-pinion design that provides improved response. Unwanted steering kickback and vibrations are reduced through use of a solenoid valve that acts like a damper when there is a harsh impact load. The standard Vehicle Dynamic Control (VDC) system has also been revised with new electronic hardware and all-new logic (versus the 350Z).

Finally, the 40th Anniversary Package, with its long list of exclusive content, will be available in limited numbers beginning in spring 2010.