Now in its third year of availability in the North American market, the Nissan GT-R enters the 2011 model year with a number of enhancements and a simplified model lineup. The previous GT-R base model has been eliminated, leaving the GT-R Premium as the only available 2011 model. The 2011 GT-R will be available through nearly 700 official "GT-R certified" Nissan dealers across the United States beginning in March 2010.

Enhancements for 2011 include slightly darker wheel center caps, double clear coat on the front and rear fascias and the addition of rear cooling ducts to improve cooling performance around the rear floor area. The suspension has been retuned and the rear bushing strengthened to enhance ride comfort while still maintaining the GT-R's outstanding handling. In addition, auto on/off headlights and speed-sensitive windshield wipers are now standard, along with a USB iPod® interface, Streaming Audio via Bluetooth® and DVD playback. The navigation system now includes XM NavTraffic® and NavWeather™ capability, along with premium points-of-interest (POI) information. 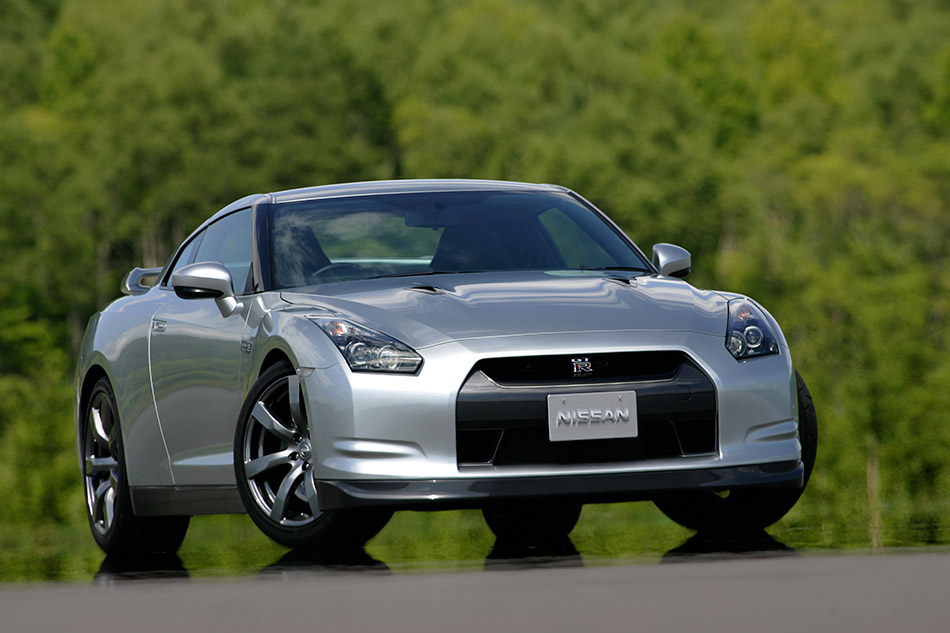 The Nissan GT-R is a multi-dimensional performance machine that lives up to the concept of "the ultimate supercar that can be driven by anyone, anytime, anywhere." It is built on an exclusive Premium Midship platform created expressly for use with the GT-R.

The Premium Midship platform enables the use of a world's first independent rear transaxle ATTESA E-TS all-wheel drive system, which optimizes weight distribution and handling capability. This layout places the transmission, transfer case and final drive at the rear of the vehicle, without the use of traditional torque tubes, allowing the suspension to operate independently and optimizing tire grip at each corner.

The VR38DETT is backed by an advanced paddle-shifted sequential 6-speed dual clutch transmission, which can be driver selected to shift at race car-like speeds. The sequential-shifting transaxle features separate wet clutches for the odd (1,3,5) and even (2,4,6) gears and pre-selects the next highest and next lowest gear for immediate shifts. It also features Hill Start Assist for easy starts on uphill inclines.

Contributing to overall vehicle balance and low center of gravity, the unique offset input and reaction shaft design of the rear transaxle enables a shorter design profile versus a typical manual transmission, moving the concentration of powertrain weight lower in the vehicle.

Putting the power to the ground is an electronically controlled ATTESA E-TS all-wheel-drive system specifically developed for GT-R. The rear drive-biased system can vary torque split from 0:100 to 50:50 depending on speed, lateral acceleration, steering angles, tire slip, road surface and yaw rate. Of note is a special GT-R-specific yaw-rate feedback control, which measures the differences between the target yaw rate calculated from steering angle and actual yaw rate detected by the yaw-rate sensor and G sensor to adjust torque bias.

The Nissan GT-R's dramatic styling remains unchanged for 2011, again following the "function over form" theory. Every styling aspect, from the overall design to the smallest details, is created to maximize the vehicle's driving experience – as well as suggest GT-R's "supercar" level of performance. Utilizing advanced aerodynamics, GT-R's aggressive styling evokes the lines of a well-trained athlete, combining strong character lines with smooth and solid areas.

The body features a low coefficient of drag of 0.27 while achieving high front and rear downforce, providing stability and handling performance in a wide range of driving conditions.

GT-R's front fenders express power and stability, while the "aero-blades" on the fenders' leading edges provide optimum airflow around the tires and along the body. The vents in the fenders' trailing edges assists in providing front downforce and optimizing side air flow. The aggressive front end, with a large hood bulge and single central air intake, provides a sophisticated style as well as undisturbed airflow for power and cooling. The "super wide beam" headlights feature three additional sub-reflectors (compared to conventional lights) to give a wide illumination spread. An auto on/off feature has been added for 2011, along with standard speed-sensitive windshield wipers.

The Nissan GT-R's four-passenger cabin features a sloping "aero blade canopy" roofline and curved C-pillar "sword edge," which expresses the distinctive GT-R identity, as well as facilitating air flow around the rear of the vehicle. The signature rear view of the GT-R is provided by its hallmark four-ring taillights, while air flow above and below the vehicle is managed by the functional rear carbon fiber underbody diffuser, rear spoiler and large, integrated quad exhaust tips.

GT-R's advanced technology is present even in the vehicle's paint, which utilizes a durable anti-chip paint and "double clear coat" process. Five exterior colors are offered for 2011, including a special seven-coat Super Silver paint color treatment includes a polished front bumper. The Super Silver paint is baked five times and is hand-polished by craftsman. Front and rear fascias receive double clear coat for 2011.

An Interior Suitable for Daily Driving or Supercar Duties

Key to the Nissan GT-R's usability as both a daily driver and a high-performance machine is its interior, which is designed to balance functionality and comfort. It provides comfortable four-passenger seating and trunk capacity of two golf bags or suitcases.

Sculpted performance bucket seats give the driver and passenger a comfortable driving experience, and soft pads are utilized on the dash in front of the passenger and both doors to give an extra level of comfort. The rear transaxle layout of GT-R, with a flat floor and narrow center tunnel, allows GT-R to have an optimal driving position. 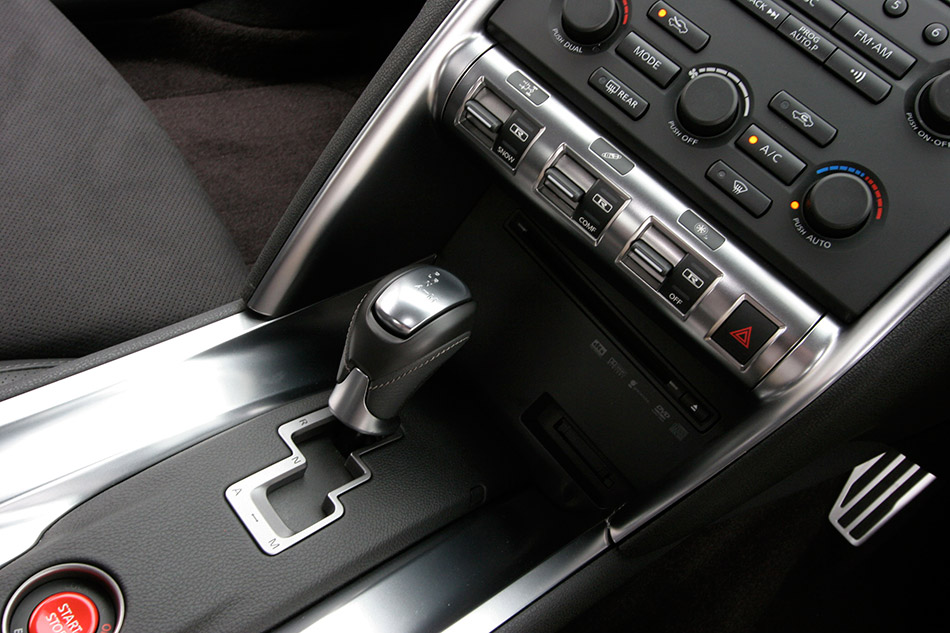 A cockpit-style instrument panel surrounds the driver, with all meters and multi-function meter at a uniform height to minimize the driver's head movement. A large center-mounted tachometer, with gear display on its upper right, as well as the easy-to-read graphics of the display, gives the driver instant detailed information, essential for the performance nature of the GT-R.

Functional style is also evident in GT-R's interior – each meter features a dial plate design that evokes the idea of engaged gears, as well as a three-dimensional metal-like ring, suggesting the multi-dimensional performance of GT-R. A large, metallic-framed center console features an ergonomically designed shift lever and a red "engine start" button.

The centerpiece of the instrument panel is a video game-inspired multi-function display. Eleven pages of information are available on this system, including mechanical and driving information, acceleration, brake pedal pressure, steering angle and a recording function with playback. Additional on-screen information includes a Navigation system, an entertainment system with a Music Box Hard Drive and DVD playback capability and Bluetooth® Hands-free Phone System. For 2011 the navigation system receives XM NavTraffic® with Real-Time Traffic Information and NavWeather™ capabilities.

All 2011 GT-R models include a specially designed 11-speaker Bose® audio system features two forward-facing woofers in the rear center armrest area. Rigid aluminum die cast panel-mounting of all speakers allowed Bose® engineers to perfect the acoustical performance of the GT-R sound system. Streaming Audio via Bluetooth® has been added for 2011.

The Nissan GT-R is sold and serviced through nearly 7000 Nissan dealers that have attained "GT-R Certification" status by meeting a number of strict sales, service and facilities commitments – including dedicating a master technician to GT-R service, special training for service managers and technicians, and designating dealer principals, executive managers and general managers as the primary communicators and negotiators in sales transactions. The names and locations of local GT-R Certified Nissan dealers are available to consumers on NissanUSA.com.