The all-new vehicle design sheds 500 pounds of mass compared to the outgoing model yet maintains the Pathfinder's SUV-ruggedness while delivering up to 26 miles per gallon on the highway. With its blend of capability, including class-leading standard towing capacity of 5000 pounds, and modern amenities, such as a class-exclusive Around View™ Monitor, the 2013 Pathfinder is the next-generation SUV. 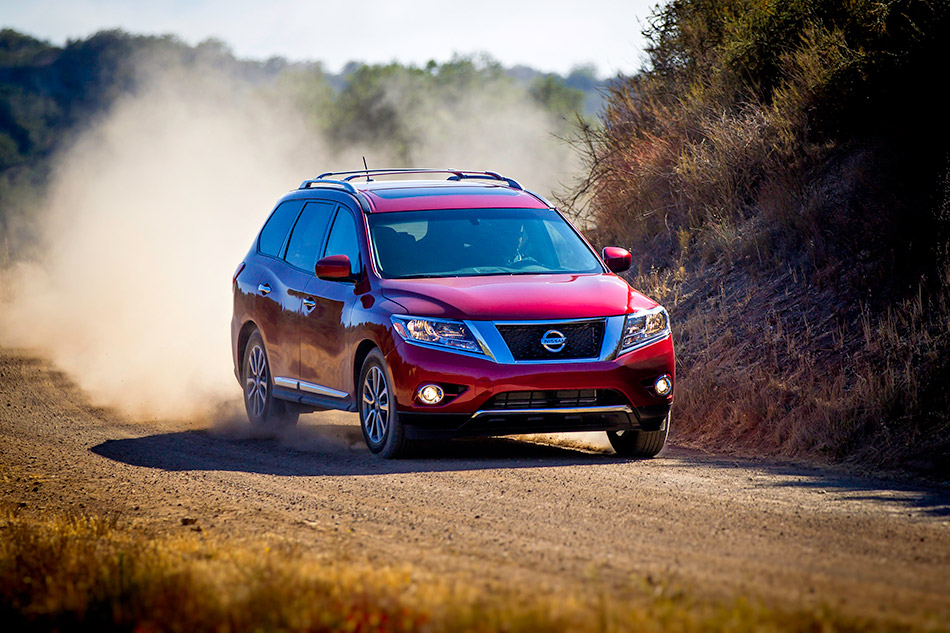 "Unveiling our next-generation Pathfinder is a major follow-up to the introduction of the all-new Altima sedan," said Al Castignetti, vice president and general manager, Nissan Division, Nissan North America, Inc. "With its bold new design, best-in-class fuel economy and family adventure capabilities, our dealers can't wait to share this new model with customers in their showrooms."

City, highway and combined average fuel economy numbers are 20 (City), 26 (Highway) and 22 (Combined) mpg for the FWD version and 19 (City), 25 (Highway) and 21 (Combined) mpg for the 4WD version. This significant increase over both the outgoing model's fuel economy as well as that of the competition was achieved primarily through a new, aerodynamic vehicle design, 500 pounds of weight reduction, reduced engine friction and the application of a class-exclusive, next generation Xtronic CVT®.

Also playing a significant role in the Pathfinder's excellent fuel economy is the fact that it is now one of the lightest vehicles in its segment, with the FWD model tipping the scales at a mere 4149 pounds. Even the 4WD Pathfinder weighs only 4290 pounds.

Nissan teased the new Pathfinder earlier this year, showing a concept exterior design model in January. Today marks the first official look at the production model, which goes on sale nationwide this fall.

Truck-based SUV sales peaked in the mid-2000s and have declined steadily as consumer demands shifted to more refined, fuel efficient crossover SUVs. The 2013 Pathfinder is built with unibody construction, vastly reducing its weight by eliminating the fuel-penalizing mass of a traditional SUV's truck-based frame. In addition to making the Pathfinder a lighter vehicle, the new unibody chassis design increases Pathfinder's structural rigidity over the previous model. This improves ride and handling, while reducing overall noise, vibration and harshness, delivering an outstanding mix of responsiveness, refinement and ride comfort. The Pathfinder's rigid platform is also key to maintaining the trailer-towing capability expected from an SUV – the vehicle has a standard towing capacity of 5000 pounds, which is the best standard towing capacity in the segment.**

"It's no secret that the industry has shifted as gas prices have increased," says Al Castignetti. "But while traditional SUV customers are looking for improved fuel economy, they still demand a vehicle that can do all the things they need, like carrying seven people, towing, and providing the surefootedness in all conditions of a four-wheel drive."

Weight reduction is one of the key components in Nissan's drive to improving vehicle performance across the board. The just-introduced all-new Nissan Altima also is the lightest vehicle in its class.

Bold Design
Pathfinder's design conveys modernity while paying homage to the three generations of Pathfinders before it. The new unibody platform provided the designers an opportunity to create a more aerodynamic exterior without compromising headroom or cargo capacity. In fact, the new Pathfinder has more interior space than the previous model thanks to more efficient packaging.

Moving upscale in appearance, the new exterior styling presents a smart fusion of signature Nissan styling cues and dynamic strength. The look is adventure-ready with wheel-oriented muscular fenders and a strong, stable stance.

The upper body features an open cabin with a low beltline and thin A- and D-pillars, which flow smoothly into the rugged, durable-looking lower body. Pathfinder's design incorporates front and rear spoilers, rear tire deflectors and rear suspension fairings to help achieve what is expected to be among the best aerodynamic performances in the segment. Other exterior details include a wide chrome grille and large aerodynamic headlights, recessed front windshield wipers, chrome door handles and large rear combination lights.

A panoramic dual-panel moonroof, with sliding opening front panel and fixed rear glass panel which extends over the 2nd and 3rd rows, combines with the large windows to create an open, airy interior environment.

"With its new aerodynamic shape, the styling is a major step forward in the evolution of the SUV – retaining its people and cargo hauling utility without looking quite so utilitarian," said Castignetti. "It's fitting that a vehicle that tackles adventures in a whole new way also now looks the part."

Interior
Pathfinder's all-new interior design features versatile and comfortable seating as well as premium materials and advanced technology. The vehicle seats seven passengers comfortably, and is best-in-class in terms of front headroom, front leg room and overall passenger volume. Additionally, Pathfinder is now the only vehicle in the segment with a 3rd row seat recline. 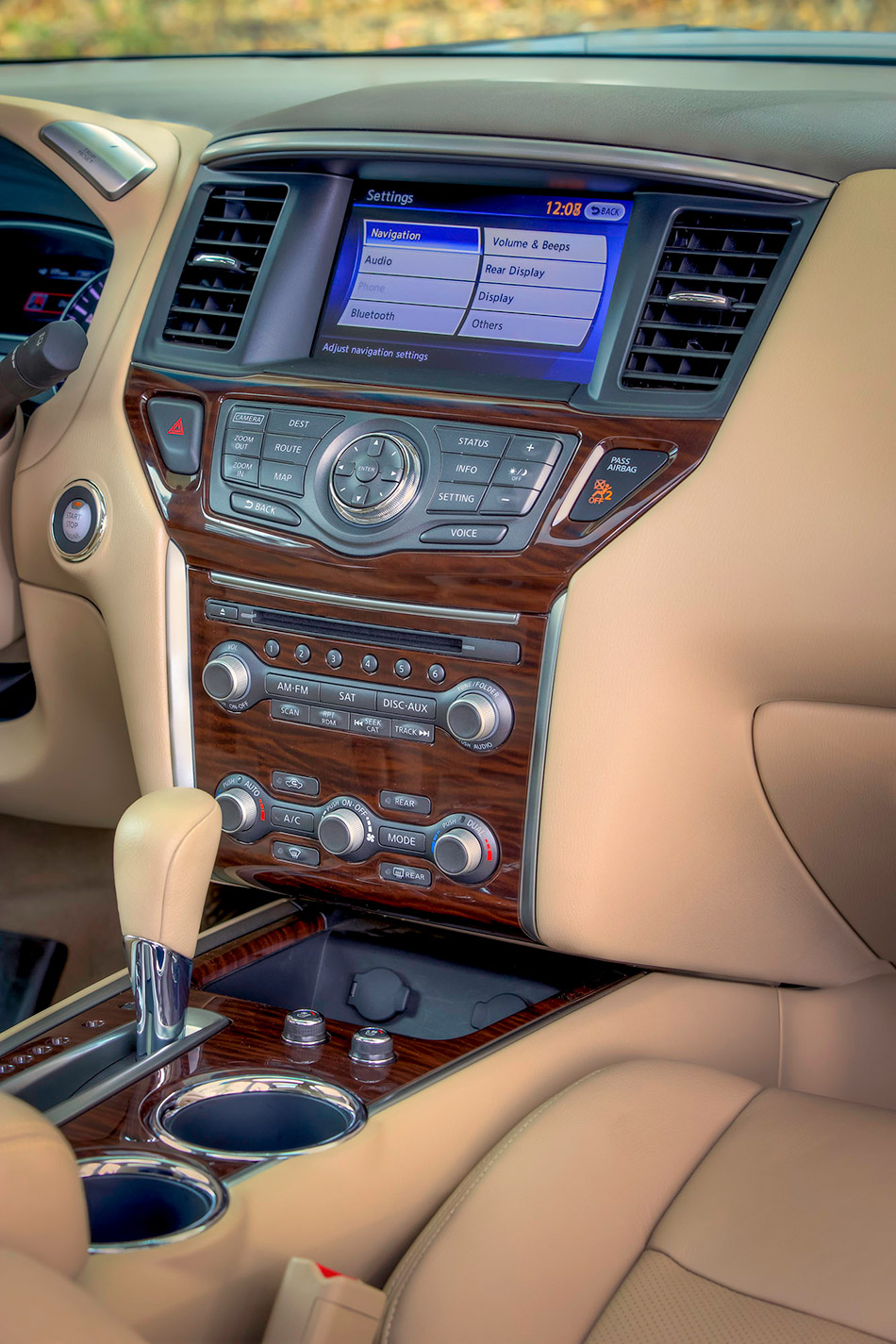 The new Advanced Drive-Assist™ Display, located in the center of the instrument display between the tachometer and speedometer, features a 4-inch color display that is customizable, easy-to-use and integrates key information right in front of the driver. A separate touch-screen monitor, mounted in the middle of the instrument panel, provides intuitive interaction and control of the available navigation system and other vehicle systems and settings.

Technology and Innovation
The all-new Pathfinder also features EZ Flex Seating System™ with LATCH AND GLIDE™. LATCH AND GLIDE™ is an industry first 2nd row tip-up seat for use with a child safety seat, which also provides easy access to the 3rd row while keeping the child seat securely fastened. The 2nd row also features a 60/40 split-fold seating with a segment best 5.5 inches of seat travel. Class-exclusive features include Easy Fill Tire Alert and the segment-first availability of an Around View™ Monitor.

New Powertrain
All 2013 Pathfinders come equipped with an advanced 260-horsepower 3.5-liter DOHC V6 engine matched with a next-generation Xtronic CVT® (Continuously Variable Transmission). It is also the only vehicle in class with selectable 2WD, Auto or 4WD modes for the available intuitive ALL-MODE 4x4-i system. The 2013 Nissan Pathfinder will be offered in 4x4 and 4x2 drive configurations and in four models – S, SV, SL and Platinum.