The Beetle! - That is the successor to an automotive icon. The New Beetle is considered the most sporting of all time. Now Volkswagen is presenting as an Asian premiere at Auto China 2012 in Beijing, that this sportiness can also be applied to a Beetle with a purely electric drive. Specially the e-Bugster was developed. A two-seat Beetle Speedster, 85 kW strong, fast in 10.8 seconds 100 km / h, with zero emissions, but with stringent proportions. 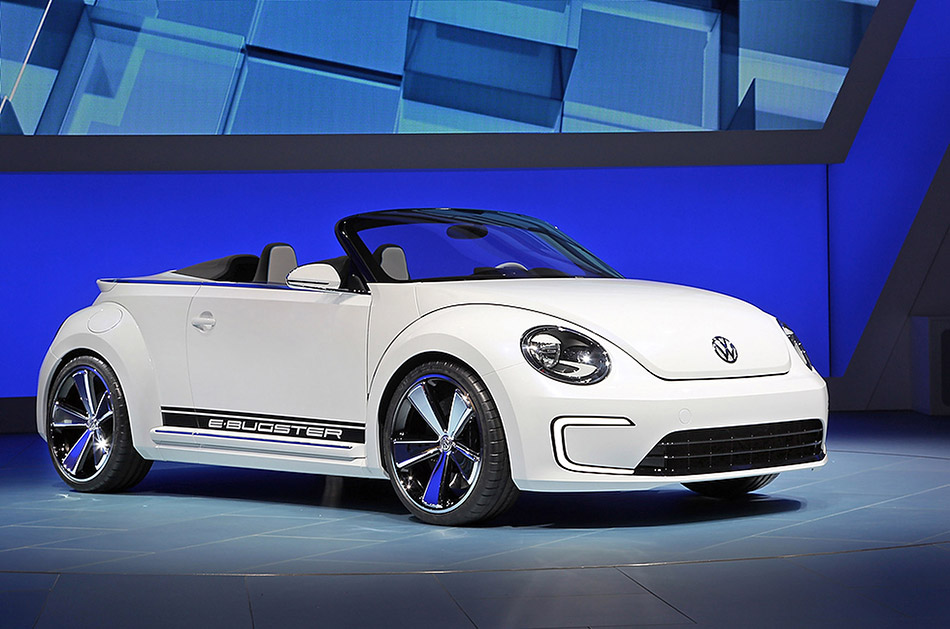 Blue-e-Motion for a clean future , the electrical center of the E-suggests Bugster forward, and it weighs only 80 kilograms. Stored energy to power the electric motor in a lithium-ion battery, whose modules are space behind the front seats. Their energy content of 28.3 kWh in the urban world allows a range of at least 180 kilometers. And this distance is sufficient in itself in a huge country like China, to bring the majority of commuters to their workplace and back. Since Volkswagen has a quick charge, the battery charging stations corresponding to within 35 minutes again "refueled". At home, the battery can be e-Bugster then load via a conventional socket. The connector for the charger is located in the C-pillar under the "normal" fuel filler flap.

Thanks to a new combined charging system allows the use of e-Bugster just a different interface, flexible Aufladetechniken. Possible are the single-phase load with AC and the ultra-fast direct current charging at charging stations (quick charge).
This creates a new unified industry standard for the plug for future electric vehicles, which is available to all manufacturers. And this unification goes even beyond the actual plug: In the combined system are charging the battery charger and the electrical architecture is also implemented for all cargo types. This reduces costs and facilitates the worldwide spread of electric vehicles.

Battery recharge when braking. How much energy the driver of the e-Bugster just with the "Power Pedal" retrieves it detects a power display. In addition, there is a range indicator and a display connected to the charging status of the battery. New on board of the beetle also is a vehicle through which the driver can read the Rekuperationsintensität. Recuperation is for braking energy recovery: As soon as the driver releases the gas and / or brakes is converted into kinetic energy between electricity and stored in the battery. This extends the reach of e-Bugster. The entire electric drive unit is called the way Volkswagen Blue-e-Motion.

Visions versions. Bugster? Because what is ringing. Clear Ragster! That was in January 2005. Also in Detroit. As a New Beetle, Volkswagen presented as Ragtop Speedster with a flat (folding roof) - the Ragster. A design vision for the future of Beetle - broad, flat, sporty. 2005 was the feasibility of the study: "Everything is possible". 2012, it is against it: "Everything is possible" because the idea of Ragster - wide, flat, sporty - was with the current Beetle in October 2011 (except for the ragtop) reality. Is still a question mark behind the name E-Bugster? This is quickly resolved: a combination of the suffix "E" for electric models, the Beetle-American nicknamed "Bug" and the generic term "Speedster" for open two-seater.

Proportions of a sports car. The e-Bugster is a Beetle, as he might look like little more dynamic. Actually been a sports car. Less than 1,400 mm high, or about 90 millimeters less than the Beetle permanently closed. And even the works with his clean-cut proportions damn powerful. The width (1,838 mm) increased by 30 mm, while the length (4278 mm) is identical. The e-Bugster shows from any angle a unique dynamic. Details of the production version has been complemented by new design elements. The fact that the study still formed as a unified stance on the road, has a very simple reason: The Design Team of the Beetle had all derivatives of the future during the development in October 2011 introduced standard model on the radar of possibilities. And so, among others an Speedster with electric motor, the E-Bugster.

Front and rear Bugster. falls immediately to the front as well as large flat windshield, the glass extends laterally to the A-pillars. In addition, distinguishing the equipped with LED lights E-Bugster the completely individualized bumpers from the series-Beetle: Left and right of the central ventilation opening built, the designers of C-form (right, of course, mirrored) LED strips as DRL - since Europe presented in e-up! (Concept Car), this form of daytime running lights, a bookmark is Volkswagen's electric vehicle trials. The newly designed rear bumper design elements that appear in modified form as a reflector. The Speedster rear windows need not provide the visibility of loopholes shows the way the rear window of the e-Bugster: It is extremely broad.

Speedster silhouette. A Speedster need flat washers and a deep roof. The e-Bugster she has! First, we scan the skyline: Among the typical flared wheel arches are enlarged to 20 inches derivatives of 18-inch wheels Beetle "Twister", which are equipped with tires 235/35 R 20. Between the wings: the typical for the Beetle of all times "V" of the edge. From the sill of the eye wanders from high above the large, smooth, homogeneous surface of the door and pulled like a knife crease above the door handle. A few inches above this point, the Beetle for Speedster: The designers extended the chrome line the window edge to the back, it runs now (as once in the New Beetle Cabriolet) once around the car, from A-pillar to A pillar. About this chrome line stretches in a shallow curve of the hardtop "bug". Radius follows the roof - in the classic speedster style - the upper limit of the side windows. The height between the top and bottom chrome window roofline is flat 400 mm. As befits a speedster! 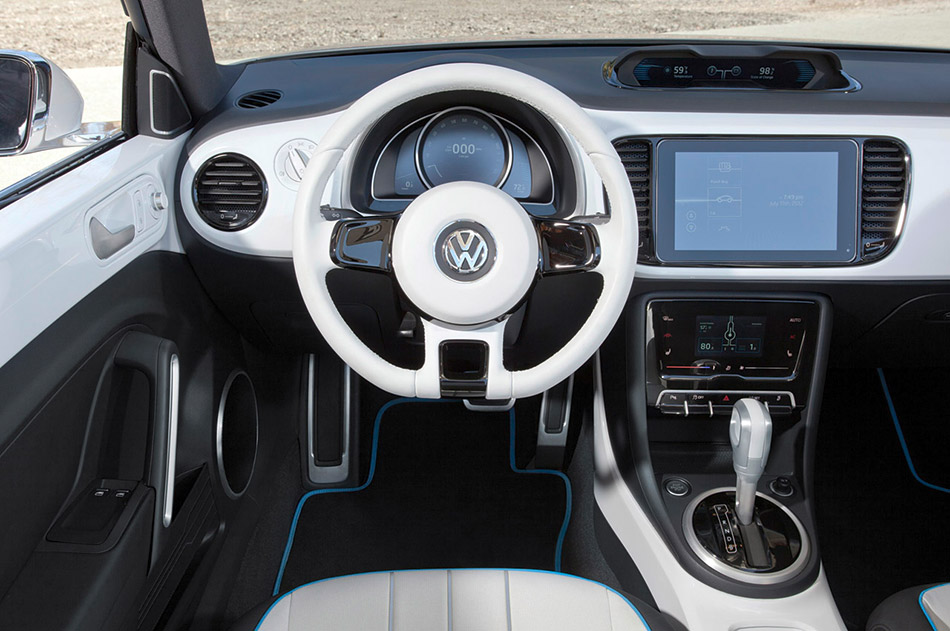 Progressive interior design. The combination of high technology and dynamism is also reflected in the interior. Sports seats and a painted body-color continuous center tunnel underline the sportiness of the e-Bugster. The use of aluminum as a material for the door opener and belt guides, and the design of the steering wheel in the lightweight nature also create a direct connection between the exterior and interior. A special experience is the start of the E-Bugster. Background: The start-stop button is not only the car but also a light show going, the interior initially immersed in a white, then in blue light. Starting from a pulse in the instrument cluster, will also open the curtain and a one millimeter thin line of light into the door sills and air vent surrounds - a kind of awakening of the optical E-Bugster.