When it arrived a little more than three years ago, the Nissan Juke used innovation to create a whole new market segment. Just as the Nissan Qashqai pioneered the original crossover market, the Juke used dramatic design and advanced technology to break new ground in a more compact crossover package.

The Juke's combination of highly individual styling, strong driving dynamics and sophisticated interior equipment has allowed it storm from zero to 420,000 sales in less than 40 months, easily eclipsing its rivals.

Now, following Nissan's established practice of constant development comes the next chapter in the Juke story. Establishing itself as the original stand-out model in the growing small crossover market with premium style and refinement, the new Juke is ready to once again stamp its authority on the segment it created. 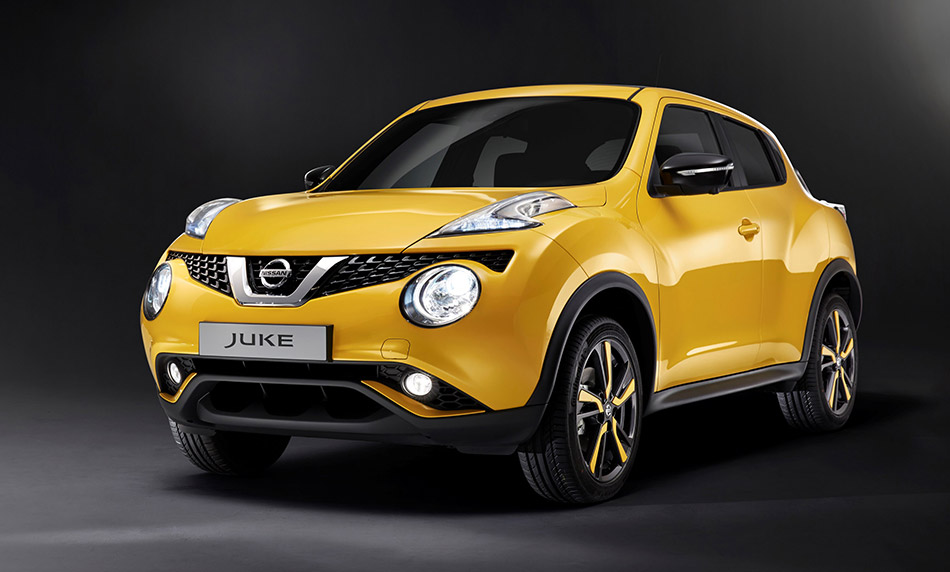 Already recognised as the design trend-setter, the new Juke benefits from a series of design enhancements, new engines, new equipment and a wide-ranging personalisation programme.

Revisions in the luggage area have increased space by 40 per cent in two-wheel drive versions up to 354L, while there's even greater opportunity for owners to really stamp their own personality on their Juke. A range of new colours and interior themes are available with a number of different personalisation packs.

The changes and range additions will accelerate the growth of Nissan's second most popular model in Europe, helping it to emulate the remarkable achievements of its big brother Qashqai.

Juke is the best seller in the premium B-segment, outperforming all direct competitors including those from the top German brands. And it's not just the entry-level models which have helped Juke to the top: the best selling engine to date has been the 1.6-litre petrol unit while the top Tekna grade accounts for more than one third of all sales.

Buyers have also been attracted by a strong range of special versions - notably the Shiro and the advanced n-tec models - and the Kuro and Ministry of Sound limited editions, while the sports oriented Nismo has added driving thrills as well as breadth to the range.

On its way to a total of 420,000 sales, Juke has achieved 135,000 sales in 2013 with its popular set to increase with the introduction of the new version. All Juke models sold in Europe are built in Europe, at Nissan's highly productive plant in Sunderland, UK where three shifts per day are needed to cope with demand.

Significantly for Nissan, Juke has attracted a huge number of buyers new to the brand. As much as 85 per cent of sales have been to first-time Nissan owners, not only making it the highest conquest model in the Nissan range but a model that comfortably outperforms the B-segment average with many of those new buyers downsizing from larger cars.

"We stunned the industry with Qashqai, the original crossover, and we've done it again with Juke. If anything, Juke is even more daring and different than Qashqai and appeals to a younger, more out-going audience.

"The changes we have made to new Juke will extend that appeal even further to cement Nissan's position as the leading brand in the crossover market," said Guillaume Cartier, Senior Vice President, Sales and Marketing for Nissan in Europe.

New Juke will go on sale across Europe in the summer, 2014.

The changes in detail:

Bold design has always set the Juke apart from any rival, offering a mixture of crossover toughness with sporting appeal that has seen it become a design icon.

To radically alter the proportions would undermine the Juke's unmistakable presence, but designers have still managed to make significant changes to the car's styling.

At the front, the upper lamps have been redesigned and now incorporate bi-intensity LED daytime running lamps while the headlamps now have Xenon bulbs for better visibility and new lens covers. The grille incorporates the new Nissan brand signature while the front has been toughened with new and more robust trim beneath the bumper.

Door mirrors have been revised to include LED side turn strip repeaters and, where fitted, cameras for the Around View Monitor.

At the rear the bumper has a more aggressive shape to match new revised boomerang tail lamps with LED light guide technology, giving the new Juke a more distinctive appearance at night.

A new range of wheels completes the exterior revisions, with 16-inch steel and alloys available on entry-level Visia models and different styles of 17-inch alloys on Acenta and Tekna variants. A new 18-inch alloy wheel will also be available with coloured inserts available allowing drivers to add their personal touch.

In addition, the extensive new personalisation packs include the opportunity to add drama with brightly coloured inserts which completely change the look and feel of the wheels. Different packs also allow contrasting colours to be applied to the mirror caps, side sills, roof spoiler and door handles.

In the same way that the exterior styling differentiates Juke from anything else on the road, so the interior has a number of distinctive features, including the centre console inspired by a motorbike. And again, changing these features for the sake of it would be counter-productive.

Instead Nissan designers have found ways to make the interior even bolder and more dynamic with different interior themes. In standard cars, the interior theme is a sophisticated grey, giving a technical feel to the car. Add one of the interior personalisation packs and features such as the centre console, door trims and other elements can be coloured red, white, black or even a bright yellow.

Depending on the model, there are two styles of fabric for the seat upholstery - comfort and sport - with leather trim on top versions.

Changes have also been made to the shape of the trunk area in two-wheel drive models to boost luggage space by an impressive 40 per cent, taking the overall capacity to a class-leading 354 litres ­­- unlike rivals, Juke can carry a large and a medium suitcase at the same time, and is also deep and wide enough to carry a chassis-type pushchair.

Versatility is further enhanced with flat folding rear seat, making it easier to load large objects, while the inclusion of a two-stage floor in the luggage area makes the space even more flexible.

NissanConnect now offers smartphone connectivity with access to a variety of apps ranging from social media platforms to entertainment including internet radio through a large, 5.8in colour touch screen. The latest generation satellite navigation system integrates with Google® to reveal a host of useful information from weather forecasts to the location of fuel stations, hotels, restaurants and many other points of interest.

A send-to-car function also allows drivers to search for their destination at home and send destination instructions to NissanConnect system at the click of a button. The system includes Bluetooth audio streaming and mobile phone integration as well as Aux-in and USB slots.

When not in infotainment mode, the screen doubles as a monitor for the newest version of Nissan's pioneering Around View Monitor which gives a complete real-time 360 degree ‘helicopter' view around the car to make manoeuvring as safe and easy as possible. Using the AVM cameras together with sensors, radar and other advanced technology, Juke's Safety Shield incorporates a number of features engineered to make the car as safe as possible. These include Lane Departure Warning, Blind Spot Warning and Moving Object Detection, which gives visual and audible warnings to avoid potential collisions.

The final option opens a whole new world to Acenta and Tekna owners, literally. A large open-able glass panel allows not just daylight to flood into the cabin but also fresh air as required. When opened, the panel sits on top of the rear portion of the roof so as not to steal interior headroom. The glass panel measures 964mm wide by 837mm long to cover two thirds of the roof area. This is matched by an opening width of 693mm and an opening length of 301mm to add to the feeling of airiness in the cockpit.

Three engines are available for new Juke, with changes to the two petrol options: one is new and the other extensively revised. The existing and acclaimed 1.5 dCi diesel with 110ps (81kW) continues unchanged.

Its lower weight, standard automatic Stop/Start feature and more fuel-efficient operation translates into cleaner and more economical performance. The 1.2 DIG-T engine emits 126g/km* of CO2 and has a fuel consumption figure of 5.5 l/100km*.

The existing 1.6 DIG-T petrol unit has been further improved to deliver lower end torque below 2,000rpm. Producing 140kW, it is already Euro6 compliant with target emissions of 139g/km of CO2 for the 2WD versions. Among its new features are a higher combustion ratio (increased from 9.5 to 10.5:1), improved low friction technologies and cooled Exhaust Gas Recirculation.

"New Juke builds on the qualities that made the original such a success. Its unique crossover styling is even more energetic, and the interior makes a real statement.

"The new drivetrain options and advanced technology on offer to the driver keep new Juke ahead of the rest," said Guillaume Cartier.