A power to weight ratio of 2.83 kilograms per HP, incredible 3.4 seconds from zero to 100 and a top speed of more than 300 kilometers per hour: That is the new OETTINGER 500R. The 518 HP powerful super sports car with a 5 cylinder power plant, 4 wheel drive and aluminium front axle, celebrates it's world premiere at the legendary Wörthersee GTI Meet from the 13th – 17th May. Sidney Hoffmann, the star from German TV's die PS-Profi's, will unveil the street homologated race car on the OETTINGER stand at 2:00 pm on the 13th of May.

"This not a car for the showroom", was the message coming out of the development department at OETTINGER. "This vehicle is laid out for performance and must be rock solid going round corners." The infernal roar of the 5 cylinder engine will resound through Wörthersee. The OETTINGER 500R will be offered as a Special Edition. The price is still open, it will be announced in the coming weeks. Further development stages 600, 650 and 750 HP should follow shortly.

In the OETTINGER 500R: Engineering and design combine with competition characteristics. The list of technical highlights is utterly breath taking; the newly developed OETTINGER 500R Racing Design Package lends the ultra performance vehicle an assertive presence. The vehicle, which is based on the current Golf 7 R, has grown in width by 100 mm (4").

Unbelievable is also the development time for the OETTINGER 500R. Only 3 ½ months lie between the first model and the premiere at Wörthersee. The OETTINGER Designer, Rolf Schepp, designed the OETTINGER 500R Racing Design Package and then realised it together with four modellers. Beforehand a 1:4 scale model was tested in the wind tunnel.

The engine compartment of the OETTINGER 500R contains the complete knowledge and skills of the renowned tuner from Friedrichsdorf. Here a significantly modified 2.5 litre TFSI 5 cylinder in line engine with modified turbocharger and revised programming of the engine ECU now works. In addition the engineers have fitted the power unit with different high performance forged pistons and reworked the intake pipe. The air intake originates from the joint venture partner, RacingLine.  Also the engine coolant circuit was altered. Further the engineers revised the radiator and intercooler. Finally the exhaust system was also modified. The OETTINGER 500R has a new down pipe with a sports catalyst, together with a twin competition exhaust from the catalyst back. In order to be able to chase the best times on the track, the gearbox, differential and clutch have been upgraded as well. 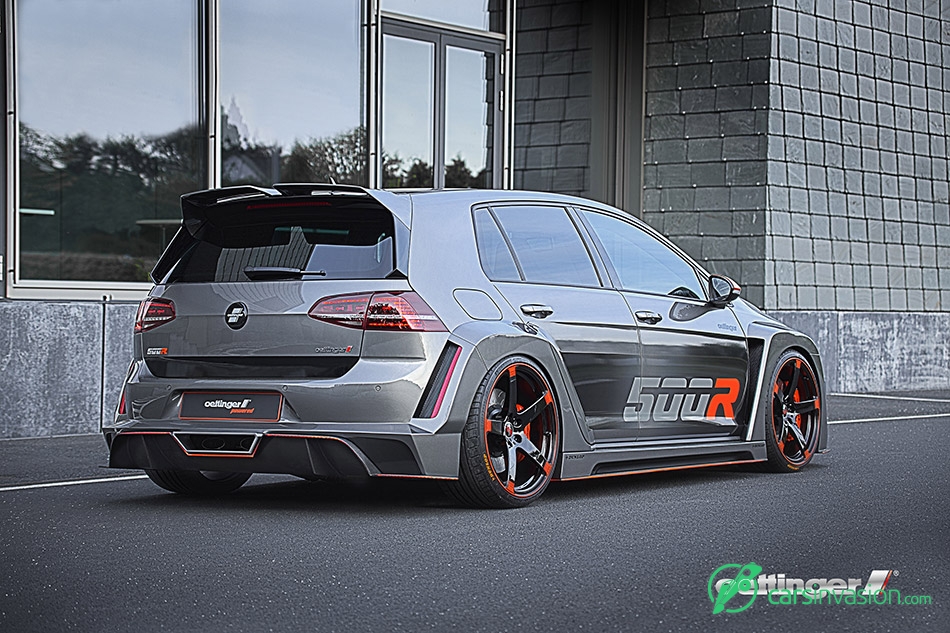 For the suspension the team from Friedrichsdorf installed a 3 way clubsport suspension with competition valving from KW. At the Wörthersee Meet the OETTINGER 500R resides on forged 10" x 20" ATS rims skinned in 275/25 R20 Dunlop Sport Maxx tyres. For use on the track OETTINGER rely on 10" x 18"ATS type GTR competition wheels together with 285/30 R18 Dunlop Direzza tyres.

With the complete decisive OETTINGER 500R Racing Design Package, the renowned tuner has once again presented a further impressive hit. At the front the extended skirt with its large air intakes and a genuine carbon fibre splitter draws attention. The front grille has double upper air intake openings. The developers have provided for sufficient evacuation of the engine compartment in the bonnet. The wheel arch ventilation is an eye-catching feature in the bold front wings. Genuine carbon fibre winglets adorn the side skirts. The rear wheel arch extensions have been developed for both two and four door vehicles. A striking detail at the rear is the deep and wide skirt with genuine carbon fibre diffusor with centrally exiting exhaust tail pipes together with the brawny rear wing with its Aero-Flaps. 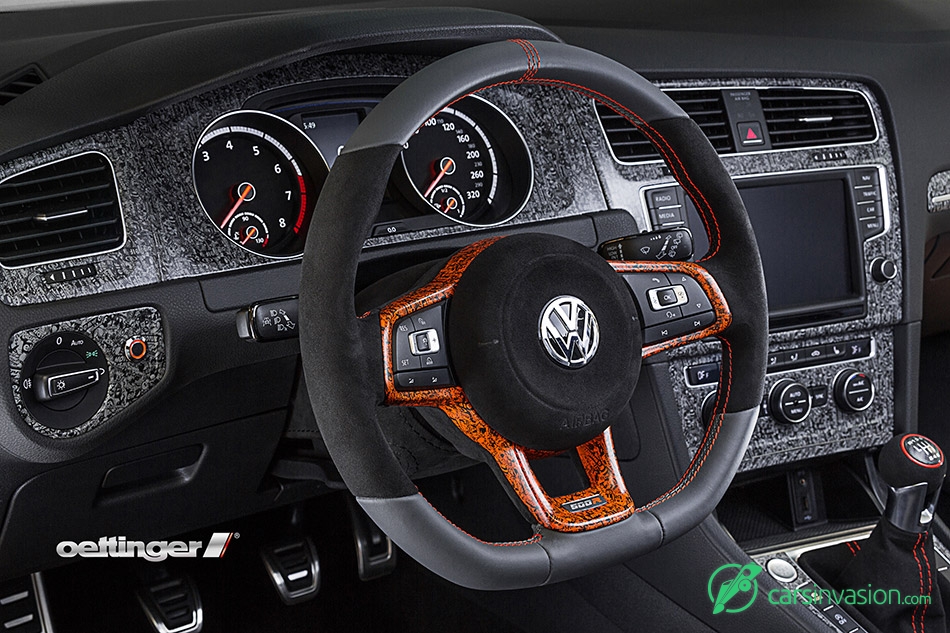 Lights out! Spot on! At the flick of a switch the Carbon Fibre elements of the OETTINGER 500R illuminate. They are fitted the Ambi-Light-Function labled "500R Orange".

Sporty, extravagant, individual: That is the interior of the OETTINGER 500R. The supercar is enhanced with an exclusive leather interior with black Alcantara in the centre of the seats. The stitching is in a contrasting "Orange" matching the exterior highlights. This exclusive finish is applied throughout the interior, to the racing seats with integrated head rests and openings for competition harnesses, the three spoke sports steering wheel, as well as the door panels, rear seat and parcel shelf.

Individualised applications can be found in the cockpit on the air vents and doors, amongst others.