The third generation of the most popular small car in the world celebrates its premiere this fall. The all-new Opel Corsa is more grown up and more spacious, but is still recognizable as the successor of its best-selling predecessor. The new model offers significantly more interior space, especially shoulder-room, and features the longest wheelbase (2491 millimeters) in its class. The fully-galvanized body scores top marks for safety and quality, thanks in part to its 33 percent higher torsional rigidity.

The efficient aerodynamics (0.32 cd) and the six-strong range of four-valve, gasoline and diesel ECOTEC engines ensure low fuel consumption. The two direct-injection turbo diesels, for example, require only 4.7 l/100 km (MVEG), while the entry-level 1.0-liter three-cylinder unit (now producing 43 kW/58 hp) needs only 5.6 liters of gasoline per 100 km. The top-of-the-line Corsa GSi, with its 1.8-liter 92 kW (125 hp) engine, can reach a maximum speed of more than 200 km/h. All gasoline engines, including the 75-hp-1.2 and the 90-hp-1.4, meet the requirements for Euro IV emissions which do not come into force until 2005. 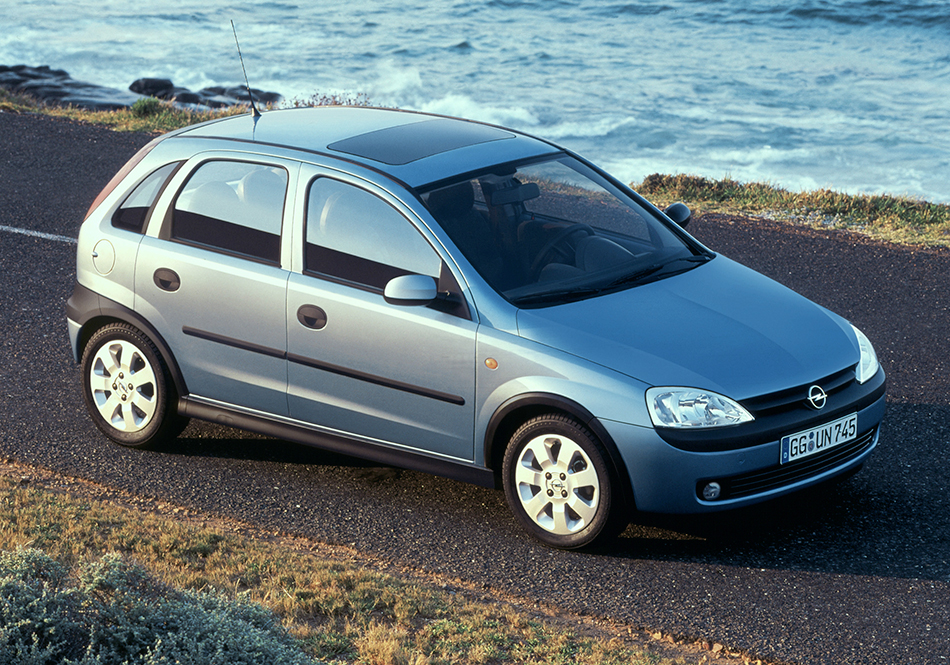 The new Corsa's DSA (Dynamic Safety) chassis provides excellent road holding. The powertrain and front suspension is decoupled from the body via a closed subframe, benefiting refinement as well as acoustics. The range of equipment sets the same high standard as the chassis' class-leading ride and handling; depending on the model version, it stretches from the "Easytronic" automated manual transmission (making its debut in the new Corsa), to an advanced "infotainment" center - unique in this market segment - with integrated 4 x CD-changer, radio, telephone and navigation system, to a passenger airbag with seat occupant detection. Only running costs have not "grown" with the rest of the new Corsa. For example, oil changes are necessary only every 30,000 km, the anti-perforation warranty extends for 12 years, and the insurance classification aims to be best in class.

The appearance of the new model - a blend of Opel's technically oriented form language of clean-cut lines and taut surfaces plus a new interpretation of typical Corsa styling cues - immediately conveys what the designers were seeking to accomplish; the Corsa was to remain a Corsa, but become more mature. The three and five-door models now look as if they come out of the same mold, with the identical design of the rear-end. The tail-lights located high in the tailgate blend harmoniously with the rear window, forming a new styling element. The wide track (front: 1429 mm; rear: 1420 mm) not only gives the new Corsa a "road-hugging" look, it also enables the new model to offer 80 mm more shoulder-room than its predecessor. The long wheelbase also provides ample space for passengers in the rear.

In the passive safety area, the Opel engineers set themselves the ambitious goal of scoring the highest rating currently possible in the Euro-NCAP crash test. The Corsa's comprehensive safety equipment includes front and side airbags for driver and passenger, lap-and-shoulder belts for all five occupants (with belt tensioners and force limiters in the front), active head restraints on the front seats and Opel's patented Pedal Release System. Also new is an intelligent airbag system with occupant detection for the front passenger seat.

Further improvements have been made to the Corsa's traditionally modest fuel consumption. This is partly the result of the body's aerodynamic drag coefficient of 0.32, which is very low for a car in this class. Additional contributions are made by the latest developments of the ECOTEC gasoline engines, which are not only more economical, but also already comply with the strict Euro IV emissions standard. The two 1.7-liter, direct-injection, turbo diesels are particularly frugal, each consuming just 4.7 l/100 km (MVEG). These four-valve units produce 48 kW (65 hp) and 55 kW (75 hp) respectively, the more powerful version featuring an intercooler.

The current Corsa, which is sold in about 80 countries, is one of the most successful models in Opel's history. It is manufactured in 11 plants on five continents, in nine body styles. Since production began in 1993, around six million units based on the vehicle architecture of the second-generation best-seller have rolled off the assembly line. Added to the 3.1 million of the first generation, that gives an impressive total of over nine million units.

In addition to receiving more than 20 international design awards, the current Corsa also holds a top position in the sales statistics of several European countries. In Germany, for example, the Corsa has been the serial best-seller in its class since 1994, and it is also a sales leader in Great Britain, the Netherlands and Portugal. The Corsa is especially popular among female customers; in 1999, for example, around 63 percent of buyers in Germany were women.

Robert W. Hendry, Chairman and Managing Director, Adam Opel AG, is convinced that "the new Corsa has what it takes to write another great chapter in this success story. It is also a prime example of our strategy of making high technology available in smaller cars too, and thus accessible to a wide variety of customers. Together with the Agila, the first microvan from a European manufacturer, we will in future offer two all-new models in the extremely important small-car market segment."