It's as green and fresh as the Opel 'Laubfrosch' (Tree Frog) of the 1920s, as confident and provocative as today's youngsters. With their 'Frogster' concept Opel's designers and engineers have reinvented today's small car concept, presenting a host of fresh ideas for the next generation of car buyers. Instead of a conventional convertible top, the study has an electrically powered roller cover to provide weather protection. It offers a choice of configurations: With four individually foldable seats, the driver can turn the Frogster into a one or two-seat roadster, three or four-seat convertible or a pick-up – all at the push of a button. When it's time to park, the cover slides forward – like a shutter – to close at the base of the windshield.

In addition, this bright green quick-change artist features a mini-computer installed in the center of the dashboard. The Frogster is thus always in its driver's pocket because this 'PDA' is not just a Personal Digital Assistant but also a radio-controlled 'car key' and roller-cover operator. When integrated in the Frogster's center console, the PDA also becomes a display for the radio, navigation and climate control systems. 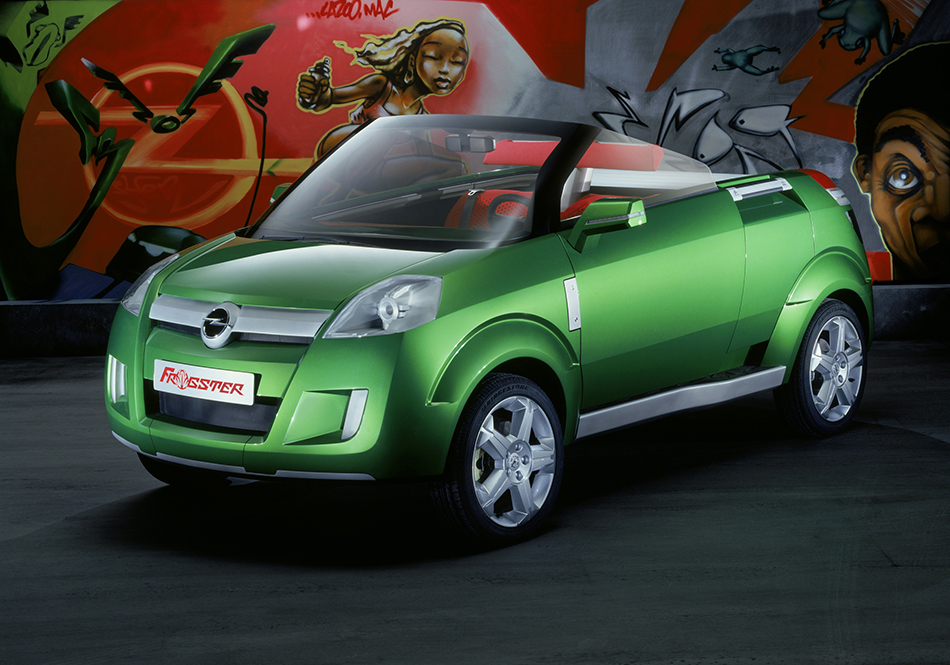 "We asked ourselves what a car for the 'Playstation generation' would have to look like," recalls Hans Seer, Director of Design at Opel. "We came up with words like 'small, price-friendly, open' on the one hand and concepts like 'young, exciting, fresh' on the other." The result, in the words of Stefan Arndt, Chief Designer for the Frogster project, "is a completely open runabout with a high belt line, extreme variability in the interior and fun bodywork details." The design study, with dimensions of 3715 x 1680 x 1530 millimeters (length x width x height), also has typical Opel features like the large trapezoid-shaped front-end, clearly accentuated wheel arches with 175/55 R 15 tires and three-dimensional headlamps and taillights. The concept car also features a number of practical details including step-like running boards and large hand-grips on the rear. Two small loading hatches behind the doors provide access to the load area even when the roller cover is closed.

Crazy but Cool: Roller Cover is Roof and Trunk Lid in One

The Frogster is powered – like the Corsa Eco – by the lively ECOTEC 1.0 12V gasoline unit (43kW/58 hp) and equipped with the innovative Easytronic automated manual gearbox. The most surprising feature is undoubtedly the roller cover, which serves as both a convertible top and load-area cover. It is made out of sturdy aluminum sections connected with rubber inserts, which make the cover waterproof and prevent rattling. This completely new element in automotive construction has long since passed its practical test under the hardest possible conditions – the same kind of roller cover is positioned vertically on the side of fire engines and used to secure the life-saving equipment on board.

In the Frogster, the 1.30 meter-long protective cover is rolled up by an integrated electric motor at the rear. When the roller cover is fully retracted and the rear seats are folded down, the little green car is configured like a pick-up truck with a load length of 1250 millimeters. When all four seats are up, the load area is 650 millimeters long. In addition, the front passenger seat can be folded down so that even surfboards can fit inside the car. In this configuration, one passenger can sit on the rear seat behind the driver.

When the roller cover is moved up over the load area, the Frogster becomes a four-seat convertible with a 500 millimeter-high trunk which can still hold 280 liters (according to VDA). The next configuration makes the Frogster a two-seat roadster with 750-liter trunk, and the rear seat backrests folded forward. The final configuration, where the roller cover is unrolled to its full length of three meters (within 25 seconds) the vehicle is completely covered for protection from the elements while the vehicle is parked. In this guise, the front seat backs fold out of the way as well, the steering wheel is tilted a few degrees downwards, and the cover locks at the lower edge of the windshield.

The sophisticated simplicity of the car's weather protection continues in the interior. The material chosen for the four seats is similar to the neoprene used in surfers' body suits. There is also a mobile phone - an obligatory item in the hip world of the Frogster - positioned between the front seats and held firmly in place in a neoprene holder. The advantage of this material is that occasional showers will not leave any lasting traces if the roller cover is open.

Operated by PDA: Part of the Frogster is Always with You

A detachable PDA offers Frogster drivers a new way to link up their in-car and out-of-car lives. In a sense, the Frogster is with them wherever they go, in their coat or trouser pocket. This isn't just 'mega-cool', it's practical, too. The driver's favorite music, for example, can be stored in MP3 format and is available at all times. When it's hooked up to the vehicle, it plays through the in-car audio system for greatly enhanced sound. And the mobile in-car computer can do even more: it can open and close the doors and set the roller cover to the desired position via remote control.

The modern mini-computer, when integrated in the dashboard, can display important comfort-related functions such as climate control settings. The 110 x 50 millimeter digital display fitted in front of the driver is dedicated to such typical automotive functions as speed, rpm, fuel, Easytronic gear display, as well as the usual indicator and full beam lamps.

The name "Frogster" comes from a chapter of Opel's eventful history. In 1924, the company enjoyed a huge amount of success with a 4/12 hp small, open road car, that people called the "Tree Frog" because of its green color. Designer Stefan Arndt recalls: "Everyone knows how excited we all are about the Speedster. When we were working on this concept car, someone suddenly called out: 'Let's paint it green and call it the Frogster.' We all agreed it was perfect."

For now, there are no specific plans to put the Frogster into production. The aim of the concept car is to test the acceptance of new ideas among the primarily young target market. "With the Frogster, we want to appeal to future generations of car drivers," explains Opel Chairman and Managing Director, Carl-Peter Forster, "It shows just how creative our engineers and designers can be." And, in Forster's eyes, it is also proof "that practical cars can be anything but boring."