Cool and tough, chunky and funky: ADAM ROCKS combines the joy of driving under an open sky with all the fun of an adventure-loving mini-crossover. Making its world debut at next month's Geneva Motor Show (March 6 - 16), ADAM ROCKS is the next addition to the ADAM family. Coming on top of ADAM JAM, ADAM GLAM and ADAM SLAM, it will further extend ADAM`s almost unlimited personalization possibilities, and strengthen its position as the individualization champion among automobiles. Presented as a concept car in Geneva just 12 months ago, ADAM ROCKS received such an enthusiastic response that the company's new leadership team swiftly made the decision to make it real and to announce its production at this year's show. ADAM ROCKS will hit the market as soon as this summer. 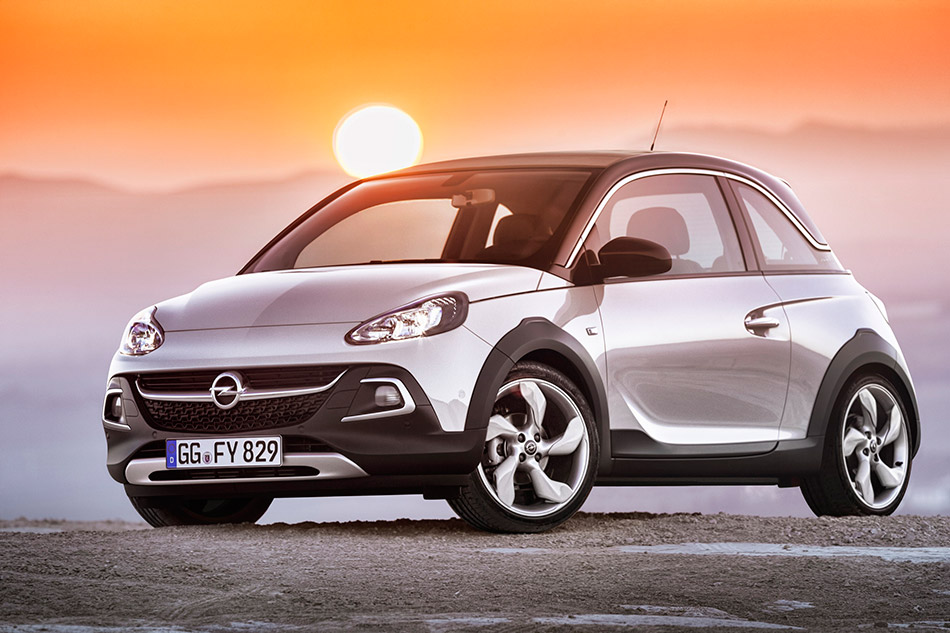 The newest model in Opel's urban lifestyle family is a 3.74-meter short car with huge zest for life – inside and outside the city. Featuring an electrically operated, retracting, Swing Top canvas roof as standard, signature body cladding all-round and a 15 mm raised ride height, ADAM ROCKS opens a new market niche; it is the first three-door urban pocket-crossover under 4.00 meters in length. To further individualize its cabin, Opel designers have developed new design elements, décors and seating trims that are unique to the ADAM ROCKS. In addition to the many innovations that raise ADAM's safety and comfort – like its hands-free Park Assist that parks the car automatically – the ROCKS also features Opel's new generation IntelliLink infotainment system. It allows seamless integration of ANDROID as well as Apple iOS smartphone functionalities into the car and makes it the best-connected small car at a very affordable price.

"ROCKS takes ADAM into new territory," says Dr. Karl-Thomas Neumann, Opel/Vauxhall CEO. "It's unique in combining the toughness of a crossover with the coolness of open air driving. Like all Opel ADAM models, the ROCKS is a real individualization champion; almost every ROCKS will be one of a kind. And in the ROCKS variant the ADAM remains the best-connected small car with a host of innovations. It also introduces a new generation engine and a new generation transmission with state-of-the-art technologies. No less than that! We're proud that, in just twelve months, our teams turned ADAM ROCKS into one of the major highlights of the 2014 Geneva Motor Show."

Inspired by the exploits of agile ‘Parkour' athletes who use the city landscape as their playground, the new ADAM ROCKS body style opens a new niche – a space in the small car segment for urban mini three-door crossover vehicles. So far, the most compact model that is comparable is about 40 cm longer. Rugged good looks, a higher stance and muscular proportions as well as a Swing Top roof for fast, open-air fun will appeal to those seeking personal freedom off the beaten track in the city and beyond the urban landscape.

Key to ADAM ROCKS' purposeful stance is a 15 mm increase in body ride height, giving greater ground clearance, and a wider, masculine appearance. Parts of the chassis system have been modified or re-tuned – including dampers, springs, the rear suspension geometry, and direct, responsive steering. The higher, wider looks are matched by a choice of 17-inch standard or 18-inch optional alloy wheels. These can be further personalized with new wheel clips in "Wild" design and different colors that are unique to the ROCKS.

Protective, anthracite-colored cladding is wrapped tightly around the ADAM ROCKS, giving it a tough, muscular look. The front trapezoidal grille, with a chrome central brand bar, is embedded in the cladding, while contrasting, satin chrome ‘boomerang' elements frame the front fog lamps/indicator housings and the reversing/fog lamps at the rear. LED daytime running lights and tail lights also come as standard. Silver skid plates front and rear and a bold chrome exhaust complete the exterior design.

Every bit as customizable as its ADAM peers, the new ROCKS model joins the line of individualization champions. As for exterior personalization, ROCKS features the same "floating roof" design as ADAM JAM, ADAM GLAM and ADAM SLAM, offering the possibility to combine different body and roof colors. New body paints will be introduced with ADAM ROCKS, such as the vibrant yellow "Goldbusters". The color palette will then comprise 18 body plus six roof colors for two-tone combinations.

Open air fun for the city and beyond

ROCKS combines its rugged individuality with open air fun. The standard SwingTop canvas roof gives quick access to the sky above. It is electrically operated via a button located in the front area of the headliner and folds back neatly on to the C-pillars in just 5 seconds. Creating a wide opening into the sky, this stylish system has no negative impact on body stiffness or on the car's functionality: the trunk keeps the full opening of a hatchback and loading volume remains untouched.

The entire roof module is acoustically tuned for good noise insulation inside the cabin, and the robust, three-layer fabric has a neoprene center sandwich for weatherproofing and durability. The Swing Top canvas roof is available in a choice of three exterior colors – black, dark brown (Sweet Coffee) or pale brown (Light Oak) – that combine with the different roof colors of the ROCKS.

ROCKS' cabin reverberates with its own distinctive character. Two new, exclusive ROCKS interior ambiances have been designed. They include a main instrument cluster, seat and door panel colors and other trim elements – all unique to Opel's mini urban trailblazer. One ambiance is directly taken from the ADAM ROCKS concept car revealed last year: it has elegant-sporty Peanut-colored fabric/Morrocana seats and door panels, leather steering wheel, gearshift and handbrake in the same color, and a friendly "Surf" décor trim. The other features sophisticated Coffee Bean design – rich dark brown seats in a black cabin trimmed with bright blue stitching. On top of this, almost all interior personalization options available in the ADAM range are also offered in the ROCKS.

ADAM ROCKS features Opel's sophisticated IntelliLink system that offers state-of-the-art connectivity and apps. This infotainment system is fully compatible with latest smartphones using both ANDROID and Apple iOS. It provides USB and Bluetooth connectivity, audio streaming, a 7-inch high-definition color touch-screen and seven speakers. Opel's IntelliLink system in ADAM ROCKS adds navigation by the BringGo app as well as the Stitcher and TuneIn apps. The integration of Apple iOS devices into the system enables SIRI EYES FREE voice control. This makes it possible, for instance, for drivers to have incoming SMS read aloud and to dictate SMS while they keep their eyes on the road and their hands on the steering wheel. IntelliLink is award-winning, safe and easy-to-use technology that is also amazingly affordable and makes ROCKS the best-connected small car on the market, just like its ADAM stable-mates.

ADAM ROCKS introduces Opel's all-new, 1.0-liter ECOTEC Direct Injection Turbo engine, which sets a new standard for three-cylinder refinement. Noise and vibrations are the lowest for a three-cylinder set-up – and in many regards even better than those of many four-cylinder units. This new generation engine also impresses with superior low-end torque: 166 Nm are generated from just 1,800 rpm. Key efficiency enablers of this compact, all-aluminum engine with a single scroll turbocharger include direct injection, variable valve timing, a switchable water pump and an integrated exhaust manifold. Fuel-saving Start/Stop technology is an integral part of the system and offered as standard. The new 1.0 ECOTEC Direct Injection Turbo comes with a choice of two power ratings of 66 kW/90 hp and 85 kW/115 hp. Fuel consumption is as low as 4.3 l/100 km – a great value for a gasoline powered car (according to NEDC test procedure; preliminary data). The engine tops a gasoline powertrain menu including ADAM's three current four-cylinder naturally-aspirated motors (1.2-liter with 51 kW/70 hp and 115 Nm; 1.4-liter with 64 kW/87 hp/ and 74 kW/100 hp, both delivering 130 Nm).

Not only a new generation engine, also a new generation transmission premieres in the ADAM ROCKS. Both versions of the 1.0 ECOTEC Direct Injection Turbo powerhouse are mated to an all-new six-speed manual gearbox with a compact package design. During its development, focus was on efficiency (thanks to reduced friction) and benchmark shifting: gear change is comfortable, fast, precise and smooth.

Following its Geneva premiere, ADAM ROCKS will go on sale in early summer when its prices are made public. Production in Eisenach, Germany, will start in August 2014.